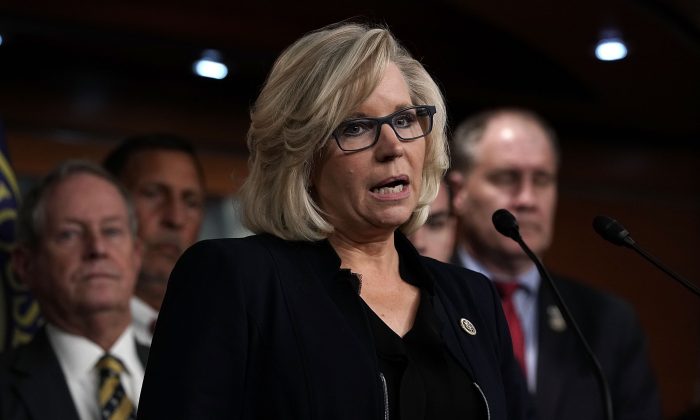 Republican Wyoming Representative Elizabeth Cheney clarified why her “socialist colleagues” and the progressive Democrats are wrong on their anti-American policies and for trying to paint President Donald Trump and others as racists for opposing them.

The congresswoman, joined by Republican leaders in the House, began yesterday’s news conference by addressing the feud between Trump and four minority Democrats who have accused the president of being racist and incompetent: Reps. Alexandria Ocasio-Cortez (D-N.Y.), Ilhan Omar (D-Minn.), Ayanna Pressley (D-Mass.), and Rashida Tlaib (D-Mich.).

“I want to talk about what has been going on over the last few days,” Cheney said. “I want to make absolutely clear that our opposition to our socialist colleagues has absolutely nothing to do with their gender, with their religion, or their race. It has to do with the content of their polices.”

Trump called out the freshman congresswoman—who have become known as “the squad”—for their anti-American comments and in one of his tweets wrote, “We will never be a Socialist or Communist Country. IF YOU ARE NOT HAPPY HERE, YOU CAN LEAVE! It is your choice and your choice alone. This is about love for America. Certain people HATE our Country….”

The four freshman congresswomen all advocate socialist policies. Ocasio-Cortez is a member of the Democratic Socialists of America while the other three just share the ideology.

Responding to this and other tweets from the president, Omar said at a press conference yesterday, “He’s launching a blatantly racist attack on four duly elected members of congress.”

Cheney made it clear that the freshman congresswomen’s socialist policies take power from the people and give it to the government.

Cheney went on to list some of the congresswomen’s most famous policies, saying they’re “wrong when they say we should open America’s borders, abolish ICE and DHS … when they advocate policies that would eliminate all private health insurance in this country, destroy Medicare, and force the American people to pay for free health care for illegal immigrants.”

“Every one of their socialist programs would create massive new government dependency and end the very economic growth we need to ensure everyone can prosper,” she added.

According to Merriam-Webster’s dictionary, socialism is defined as “a stage of society in Marxist theory transitional between capitalism and communism and distinguished by unequal distribution of goods and pay according to work done.”

While there are some Democrats who are trying to stay near the center, there is a vocal group including “the squad” that is pulling the party toward the socialist left.

“Anyone who is interested in building a more equitable and just world is a part of the Squad,” Congresswoman Ayanna Pressley said.

This false sense of “equity” is what has boosted the Democrat Socialists of America (DSA).

According to author, filmmaker, and Epoch Times columnist Trevor Loudon, The DSA have gained heavy influence within the Democratic National Committee (DNC).

“The DSA has basically made a major effort, working in conjunction with the Communist Party USA and the Freedom Road Socialist Organization—which are both pro-Chinese by the way,” said Loudon. “They are taking over the Democratic Party from the grassroots up.”

The DSA helped get Ocasio-Cortez elected.

Like most socialist organizations, the DSA believes in the abolition of capitalism in favor of an economy run either by “the workers” or the state—though the exact specifics of “abolishing capitalism” are fiercely debated by socialists.

As Cheney said, it’s not just the four freshman are advocating extreme socialist polices like free healthcare for illegal immigrants, but the majority of 2020 democratic presidential candidates.

According to conservative commentator and political activist Candace Owens, the main reason why the left focuses so much on victimhood and “manipulating emotions,” is “because when your policies don’t hold up, you need to have another way to get people to vote for you.”

Cheney reiterated in her closing remarks that their opposition to the squad “has absolutely nothing to do with race, or gender, or religion. We oppose them, and their policies, because their policies are dangerous and wrong, and would destroy America.”