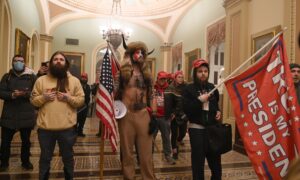 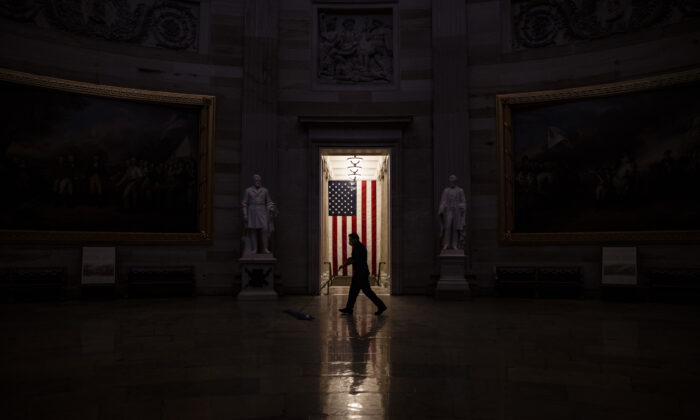 A worker sweeps up the dust and debris that was left behind by protesters in the Rotunda of the U.S. Capitol building on Jan. 7, 2021. (Samuel Corum/Getty Images)
Viewpoints

When a regime sanctions the political violence of one faction against another, events such as the bloody skirmishes at the U.S. Capitol on Jan. 6 are a foregone conclusion.

Presumably, the country’s corporate, political, and cultural elite assumed that after four years of trying to humiliate and unseat President Donald Trump that his supporters would simply accept their continued degradation, impoverishment, and disenfranchisement. Or maybe they thought that with their allied press and social media obscuring reality, no one would notice they were waging war on Americans.

Details of the events on Jan. 6 are still unfolding. In places, protestors overran police. A Capitol Police officer died of injuries suffered while holding off protestors and others were reportedly injured. Elsewhere, it seems that law enforcement welcomed Trump supporters into the Capitol and posed for pictures with them. No doubt there were agents provocateurs among the MAGA crowd, but Ashli Babbitt, who was shot and killed by a Capitol Hill policeman when she tried to crawl through a window, wasn’t with Antifa. She proudly supported Trump, as she proudly served her country, doing four tours of duty in Afghanistan and Iraq.

No one in the building that the 15-year Air Force veteran entered illegally can explain why America is still committed to those strategically pointless wars.

Neither can anyone on the Democratic or Republican side rationally justify why large parts of the country are still under coronavirus lockdowns—public health measures draining Americans’ life savings and, as importantly, their hope—to fight an illness with a 99.7 percent survival rate.

No one can say why the senior FBI, CIA, Justice Department, Pentagon, and State Department officials from the Obama administration who plotted against Trump’s White House before he was inaugurated are still at liberty, and why some have been named to the incoming administration of Joe Biden.

Nor can the representatives of the American people explain to them why the lights went out in half a dozen states on election night with Trump holding commanding leads, and came back on hours later with Biden in front in all six.

But don’t blame the people sent to Washington for the fate and fortune of the Americans they’re supposed to represent. Rep. Liz Cheney (R-Wy.) says Trump is at fault for the Jan. 6 unrest.

To hand down a war from one generation to the next is a sign of a careless and depraved elite.

“His use of the Presidency to destroy trust in our election and to poison our respect for fellow citizens has been enabled by pseudo-political leaders whose names will live in infamy as profiles in cowardice,” the retired Marine general wrote.

In June, he defended the Black Lives Matter and Antifa riots that caused billions of dollars in damage across the country and left dozens dead, including law enforcement officers. Those protests, said Mattis, “are defined by tens of thousands of people of conscience who are insisting that we live up to our values.”

Both parties within the Beltway are joined in their attacks on Trump because partisan identity—Democrat and Republican—is no longer relevant in U.S. politics. It’s the Country Party, currently represented by Trump, versus the Establishment Party, representing the interests of an oligarchy anchored by Big Tech and owing its power, wealth, and prestige to its access to cheap Chinese labor and China’s growing consumer market.

The Establishment Party protects its protestors because they are the instruments weaponized to target Trump supporters.

“Protestors should not let up,” Vice President-elect Kamala Harris said of the summer’s violence.

“There needs to be unrest in the streets as long as there’s unrest in our lives,” said Rep. Ayanna Pressley (D-Mass.).

“I just don’t even know why there aren’t uprisings all over the country,” said House Speaker Nancy Pelosi (D-Calif.).

It isn’t hypocrisy that corporations such as Bank of America and Coca-Cola that issued statements in support of the summer riots were quick to denounce the Jan. 6 protests. Nor is it hypocrisy that the activists who took over parts of a Senate office building to protest the Supreme Court nomination of Brett Kavanaugh were celebrated, while Biden and the press labeled the people who broke into a federal building as domestic terrorists.

It isn’t hypocrisy for the establishment to draw a sharp divide between allies and enemies, but rather just evidence that they are at war with the party of the country.

History, as well as simple common sense, tells that when one side shoots at the other, the side taking incoming has two choices: surrender or shoot back. There’s little doubt the party of the establishment will use the events on the Hill to implement further measures to punish the party of the country, for they would use any pretext—a respiratory illness, for example—to serve those ends.

But now, they can no longer be sure how the party of the country will respond.