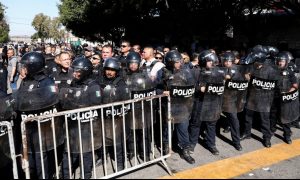 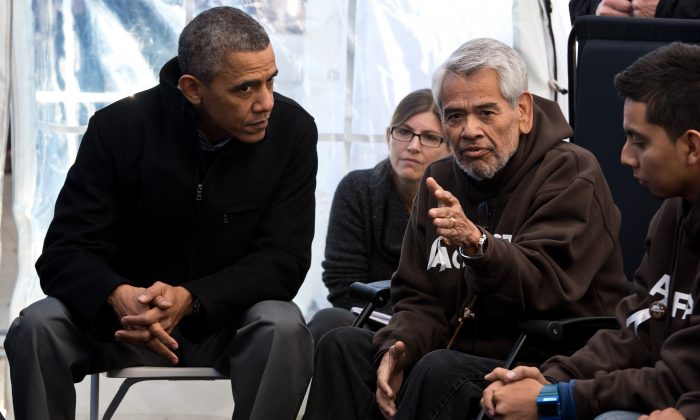 Former President Barack Obama (L) listens to Eliseo Medina and other people taking part in the Fast for Families on the National Mall in Washington on Nov. 29, 2013. Obama offered support for those fasting for immigration reform. (NICHOLAS KAMM/AFP/Getty Images)
Viewpoints

“Before immigration debates took place in Washington, I spoke with Eliseo Medina and SEIU members,” said then-Sen. Barack Obama, addressing the Service Employees International Union (SEIU) at a stop for his 2008 presidential campaign.

Eliseo Medina, Obama’s informal immigration adviser, has dedicated his life to obtaining citizenship and voting rights for America’s illegal aliens—now at an estimated 22 million—with the expressed goal of transforming the United States into a one-party state.

As a Communist Party USA (CPUSA) supporter and former honorary chair of the largest Marxist organization in the United States, the Democratic Socialists of America (DSA), Medina is undeniably the leader of today’s amnesty movement.

“When they [Latinos] voted in November, they voted overwhelmingly for progressive candidates. Barack Obama got two out of every three voters that showed up.

“So, I think there’s two things that matter for the progressive community:

“Number two: [If] we reform the immigration laws, it puts 12 million people on the path to citizenship and eventually voters. Can you imagine if we have—even the same ratio—two out of three?

“If we have 8 million new voters … we will create a governing coalition for the long term, not just for an election cycle.”

Medina’s “governing coalition” refers to Democrats having control of the federal government for the foreseeable future, “not just for an election cycle.”

Who Is Eliseo Medina?

Medina‘s road to power began in 1965 when, as a 19-year-old grape-picker, he participated in the United Farm Workers’ strike in Delano, California. Over the next 13 years, Medina worked alongside labor leader and beloved socialist Cesar Chavez, eventually surpassing his mentor as a skilled union organizer and political strategist. Medina met his future wife Liza Hirsch during this period.

Medina had met Chicago DSA comrades in the 1970s when he was in the Windy City organizing a grape boycott for Chavez. From 2004 until 2016, Medina served as an honorary chairman for the organization.

Like many DSA members, Medina also worked closely with the CPUSA.

The PWW quoted Medina praising the communist publication: “’Wherever workers are in struggle,’ Medina said, ‘they find the PWW regularly reporting issues and viewpoints that are seldom covered by the regular media. For us, the PWW has been and always will be the people’s voice.’”

In 2007, Medina personally endorsed the People’s World (by then renamed from People’s Weekly World).

Medina’s wife, Liza, is the daughter of Fred Hirsch, a self-described “communist plumber” and his even-more-radical wife, Virginia, known as Ginny. In the early 1960s, Ginny Hirsch left her husband and young children in San Jose while she drove to Guatemala with nearly a ton of smuggled ammunition destined for leftist rebels.

From the age of 12, Liza Hirsch was partially raised by Cesar Chavez and, at his personal request, committed herself at an early age to earning a law degree so she could serve as an attorney for the movement.

Though a sometimes-socialist himself, Chavez had no time for illegal aliens (who he dubbed “wet-backs”) fearing they would “scab” against his strikes and take jobs from his members. Chavez even launched an “Illegals Campaign”—an organized program to identify illegal alien workers in the fields and turn them in to the Immigration and Naturalization Service (INS).

Hirsch was put in charge of this program. In 1974, just before she went to law school, she “distributed forms printed in triplicate to all union offices and directed staff members to document the presence of illegal immigrants in the fields and report them to the INS,” according to the book “The Crusades of Cesar Chavez” by Miriam Pawel.

Socialist ethics can be very flexible.

Changing the Democrat Position to Pro-Amnesty

Medina joined the SEIU in 1986, where he helped revive a local union in San Diego, building its membership from 1,700 to more than 10,000 in five years. Medina became international executive vice president of the 2.2 million-member SEIU in 1996.

The SEIU has a huge number of illegal alien workers in its ranks. Medina used that leverage to promote amnesty in the union movement, as well as in the organized left and in the Democratic Party.

In the mid-1990s, most unions were still hostile to illegal alien workers who worked at a much lower rate, taking jobs away from union members. But in 1994, several far-left union leaders led by DSA member John Sweeney took over the American Federation of Labor and Congress of Industrial Organizations (AFL-CIO), setting the stage for a major policy change for the unions—and ultimately for the Democrats.

Claiming U.S. immigration policy was “broken and [needed] to be fixed,” the AFL-CIO on Feb. 16, 2000, called for a new amnesty for millions of undocumented workers and the repeal of the 1986 legislation that criminalized hiring them.

According to the DSA website in 2004, Medina was “widely credited with playing a key role in the AFL-CIO’s decision to adopt a new policy on immigration a few years ago.”

From his union position, Medina reached across the labor movement into the social movements and the Catholic Church to create the widest possible pro-amnesty coalition.

According to the SEIU:

“Working to ensure the opportunity to pass comprehensive immigration reform does not slip away, Medina led the effort to unite the unions of the Change to Win federation and AFL-CIO around a comprehensive framework for reform. Serving as a leading voice in Washington, frequently testifying before Congress, Medina has also helped to build a strong, diverse coalition of community and national partners that have intensified the call for reform and cultivated necessary political capital to hold elected leaders accountable.

“Medina has also helped strengthen ties between the Roman Catholic Church and the labor movement to work on common concerns such as immigrant worker rights and access to health care.”

After the election, Medina became Obama’s informal adviser on issues concerning immigration and amnesty. The fact that a DSA member and CPUSA supporter was advising the U.S. president on issues of vital national security importance appeared to concern no one.

Eventually, Medina and his movement were able to get an amnesty bill passed through the U.S. Senate. If they could only pass a bill through the House, the United States would be set on an irreversible path to socialism.

Fortunately, Tea Party-aligned Republican Congress members refused to sell out their nation. They held the line against intense pressure, and no amnesty bill was passed through the House in Obama’s eight years in the White House.

Still, House Republicans did not budge.

On May 17, 2016, Hillary Clinton’s presidential campaign announced that long-time DSA activist Dolores Huerta and Medina would join the team as senior advisers in California.

“Huerta and Medina will build on the campaign’s robust outreach to the Latino community in California and work with the campaign’s senior team to organize and engage Californians in conversations about Hillary Clinton’s plans to break down barriers and help move the country forward.

“’We are thrilled to be joined by two incredibly accomplished and admired leaders in the Latino, immigrant and labor communities, Dolores Huerta and Eliseo Medina,’ said Buffy Wicks, State Director for Hillary for California. ‘Their advocacy and leadership … will go a long way in continuing the important work of reaching every California voter in advance of the June 7 primary.’”

Clinton promised to introduce a “pathway to full and equal citizenship” to legalize and grant voting rights to every illegal alien in the country “within 100 days of taking office” if she were to be elected president.

Had President Donald Trump not won his shocking victory on Nov. 6, 2016, Medina’s dream of a permanent, unbeatable progressive “governing coalition” would today be a reality, making it virtually impossible to elect another Republican president.