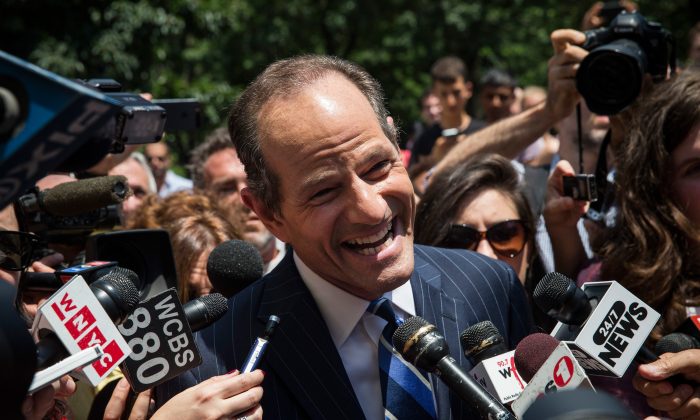 Jamie Antolini, 48, said he was sitting at a bar with potential business partners in an upscale Manhattan restaurant on Jan. 2, when Spitzer walked in and overheard his comments.

Antolini said loudly that he thought Spitzer’s rival, Kenneth Langone, should run for president, he told the New York Daily News, and that he was a great guy.

Langone was a co-founder of Home Depot and a former board member of the New York Stock Exchange.

He was named as a defendant in a 2004 lawsuit brought by Spitzer when he was state attorney general over the pay package of former New York Stock Exchange CEO Dick Grasso. The two have been bitter enemies ever since.

Langone was quoted in 2014 by Business Insider as saying:  “I don’t like [Spitzer] now. But if I check in how I feel when he dies, I think I’d feel better than I do right now.”

After Antolini made his comments about Langone, Spitzer lost it, according to Antolini.

“He leaned into me, got right in my face, screaming, yelling: ‘I don’t know who the [expletive] you think you are. I’ll [expletive] have you killed!’” Antolini told the NYPost.

Spitzer walked off but came back with more threats, including to stab him in the crotch with a knife, according to Antolini and a witness.

The witness said that Antolini stood up and faced Spitzer after he made that threat, causing staff to rush in and separate the two, the source, identified only as a prominent biotech investor, told the New York Post. “And cooler heads prevailed,” the source said.

“When the video tapes come out, it will show I sat in my chair with a glass of wine in my hand,” he told the Daily News.

Antolini never saw a weapon and never reported the incident to the police.

A spokesperson for Spitzer, who resigned as governor in 2008 after being caught in a prostitution scandal, said he was at the restaurant to celebrate his mother’s birthday, and did not threaten Antolini.

“The patron persisted in making aggressive remarks, which Mr. Spitzer initially ignored. An argument ensued, but at no time did he make any threats,” spokesperson Lisa Linden told the Daily News.

The alleged threats came shortly before Spitzer’s former mistress, 27-year-old Svetlana Travis Zakharova, handed an 18-second recording over to the NYPD of Spitzer allegedly threatening her, her lawyer told the Daily News.

Travis Zakharov accused Spittzer last year of attacking her after she told him she was going back to Russia, an accusation he denies.

She was found guilty of trying to get $400,000 out of him in exchange for keeping their relationship quiet, but was able to get the charges dropped by entering a plea deal in which she admitted guilt in a separate petit larceny case. She spent 90 days in jail.