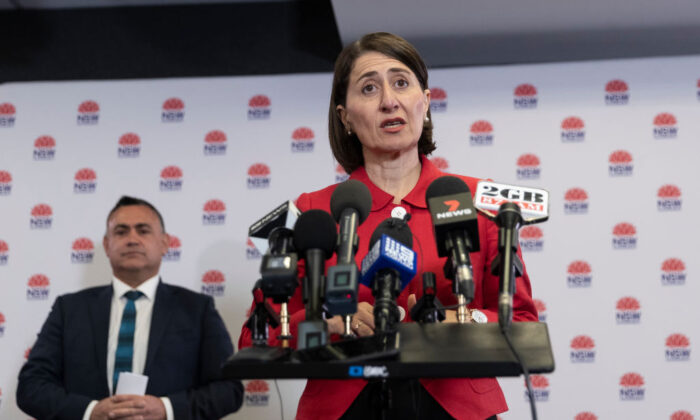 ‘Elimination’ Not Borne out by Facts: NSW Premier

NSW Premier Gladys Berejiklian says West Australian counterpart Mark McGowan should reacquaint himself with National Cabinet’s COVID-19 suppression strategy after accusing her state of being out of step.

Two were reported on Monday—a man in his 40s who presented to hospital with respiratory symptoms and his partner.

The results come after McGowan claimed NSW was the only state trying to suppress and not eliminate the virus.

Western Australia has kept its interior border closed for much of the pandemic and in recent weeks has rapidly re-implemented hard border arrangements for NSW, Victoria and Queensland.

McGowan made his remarks notwithstanding National Cabinet’s agreement on a COVID-19 suppression strategy until a vaccine is available.

WA has previously required other states to go 28 days with no COVID-19 community transmission before reopening its border.

“The idea that somehow it’s better to have the virus and then just manage it, I don’t think is the correct approach,” McGowan told reporters on Monday.

But Berejiklian reminded him Australia’s goal was not elimination but zero community transmission—particularly while overseas Australians continue to return home.

“Because we have confidence in our health system and health team, we’re able to make decisions which perhaps other state governments aren’t prepared to make,” she told reporters on Tuesday.

“I don’t want a situation in NSW that exists in other states where there’s a lack of certainty, things are done very quickly without perhaps the same kind of consideration we give in NSW, and that’s a matter for other state leaders.

“Anyone who thinks we’re going to eliminate or eradicate this disease, unfortunately doesn’t appreciate what the pandemic means.”

With the exception of Victoria at the height of its second wave, NSW has kept its interstate borders open for the entirety of the pandemic.

Of the five COVID-19 cases it reported on Tuesday, two—who were known to each other—were situated on Sydney’s northern beaches, and one directly linked to the 27-person Berala cluster.

The other two were the man who presented at Mount Druitt Hospital on Saturday with respiratory illness, prompting the emergency department’s closure for deep cleaning, and his partner.

The source of the pair’s infection remains undetermined.

Eleven cases were also recorded in travellers in hotel quarantine.

“We really need to have higher testing levels if we are to combat the rumblings that are still going on and we know that it takes some time to completely get to the target of zero community transmission,” Berejiklian said.

More coronavirus-affected venues in western Sydney and the northern beaches were identified on Monday evening.