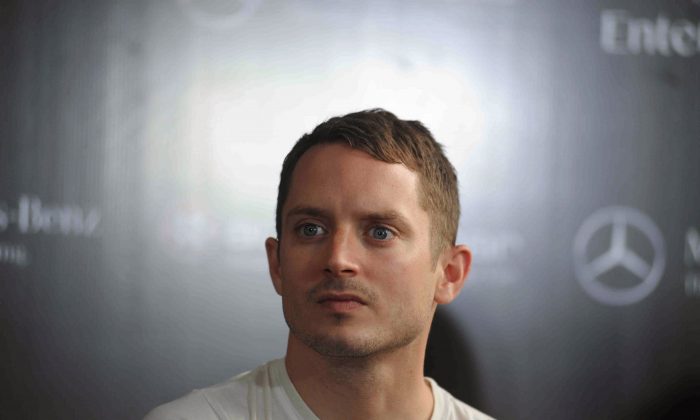 US actor Elijah Wood attends a press conference in Mumbai on September 3, 2015. Woods, who is also a DJ, is in India on a tour with his group Wooden Wisdom with fellow DJ Zach Cowie. AFP PHOTO (Photo credit should read STR/AFP/Getty Images)
Entertainment

A day after he made explosive claims about endemic child abuse in Hollywood, “Lord of the Rings” star Elijah Wood attempted to clarify his comments.

Wood told The Sunday Times over the weekend: “You all grew up with Savile … it must have been devastating,” referring to the child abuse scandal involving BBC presenter Jimmy Saville. “Clearly something major was going on in Hollywood. It was all organized.”

He added: “There are a lot of vipers in this industry, people who only have their own interests in mind. There is a darkness in the underbelly—if you can imagine it, it’s probably happened.”

On Monday, Wood issued a statement, saying there were inaccurate and deceptive headlines.

“The Sunday Times interviewed me about my latest film, but the story became about something else entirely,” Wood explained.

“It prompted a number of false and misleading headlines. I had just seen a powerful documentary and I briefly spoke with the reporter about the subject, which had consequences I did not intend or expect. Lesson learned.”

Wood added that child abuse should be comprehensively investigated but stressed he had no personal exposure to the issue.

“Let me be clear: This subject of child abuse is an important one that should be discussed and properly investigated,” he added.

“But as I made absolutely clear to the writer, I have no firsthand experience or observation of the topic, so I cannot speak with any authority beyond articles I have read and films I have seen.”

In the Sunday Times interview, Wood—who as a child appeared in “Flipper,” “North,” and “The Good Son”—said his mother protected him from abuse when he first got to Hollywood.

The Times article also quoted Anne Henry, the co-founder of Bizparents, which is an organization designed to help families of children working in Hollywood. She said that Hollywood is sheltering “100 active abusers” and a number of claims are emerging.

Corey Feldman of “The Goonies” and “Gremlins” fame recently made claims that he and others were abused in Hollywood.

In the account, Feldman said that fellow child actor Corey Haim was abused by someone who is now “one of the most successful people in the entertainment industry.”