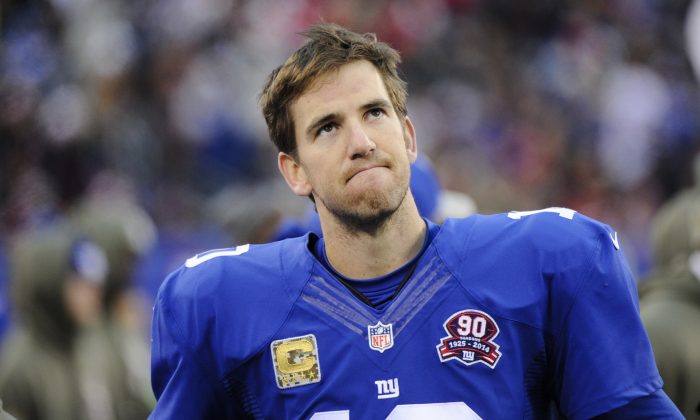 It’s no secret that Eli Manning isn’t exactly lighting it up in 2014.

He’s has a 63 percent completion rate this season and a 89.0 passer rating, and he has thrown 12 interceptions against 22 touchdowns this season. The only problem is that he’s slated to make $17 million next year.

The Giants might have to face the reality of releasing Manning or trading him to reduce a salary-cap hit to only $2.25 million, as the Wall Street Journal notes. There’s a chance that Manning could get the Giants to restructure his contract to avoid taking such a huge cap hit because it’s going to be slim pickings for quarterbacks during the offseason.

Manning has insisted that the Giants’ troubles aren’t coach Tom Coughlin’s fault. There’s also been calls–including from NBC analyst Tony Dungy–for Coughlin to be let go or fired after 2014.

“I think that you start with the coach,” Dungy said on Monday. “And Tom Coughlin should not be fired. You don’t fire coaches that have won two Super Bowls, but he should step down. This is going to be a long-term rebuilding process.”

Coughlin also said that his team needs to worry more about themselves than him.

“I try to pay attention and do the job to best of my ability and my concern is with my coaches and my team,” Coughlin said, according to The Associated Press. “Our organization, everybody in the Giants’ organization, lives and dies with how this football team does. I understand that completely and the responsibility that I have my coaches and players and to our owners, we are going to work our every-loving (butts) off to try to find a way to win a game. That’s all at this point in time that we can do.”

The 3-9 record currently held by the Giants is the worst after 12 games since the 1995 season.