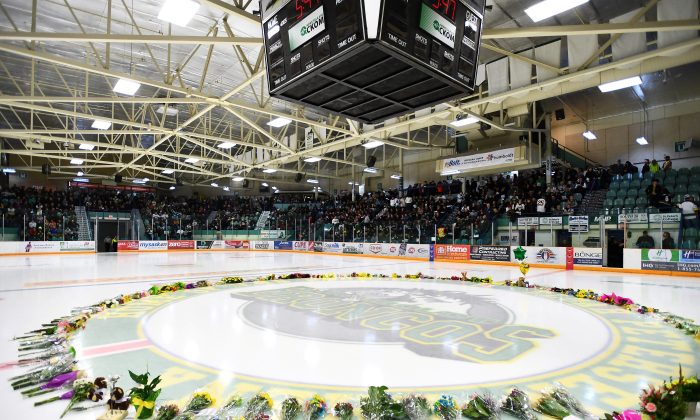 Flowers lie on the ice as people gather for a vigil at the Elgar Petersen Arena, home of the Humboldt Broncos, on April 8, 2018. (Jonathan Hayward/Pool via REUTERS)
Canada

HUMBOLDT, Sask.—Elgar Petersen was famous in Humboldt, Sask., for his love and support of the Broncos hockey team, but it was in the wake of the tragic bus crash in April that his name suddenly became known across the country.

Elgar Petersen Arena is home ice for the Broncos: it’s where mourners for the 16 people who died in the crash left flowers, where reporters stood for live updates about the crash and where a prayer vigil was held in the days that followed.

It was also where Petersen’s death at the age of 82 was announced at a Broncos game on the night of Nov. 3, just after the singing of the national anthem.

“It was a surprise to everybody. You could hear the gasps in the crowd,” said Humboldt mayor Rob Muench, who was at the game.

Petersen, who had an intellectual disability, was the local volunteer who carried water to players and tied kids’ skates.

Humboldt inducted him into its sports hall of fame in 1998 and named its arena after him in 2000. The Saskatchewan Hockey Hall of Fame honoured him as an inductee in its Grassroots category in 2015.

The Saskatchewan Hockey Hall of Fame says on its website that Petersen was a major contributor to all levels of hockey in Humboldt since the late 1960s. It says that during his time as a volunteer with Humboldt Minor Hockey, he was a coach, a mentor, and a player. Petersen was seen at the rink almost every day, sometimes for over 12 hours a day, it says.

“The members of the hockey community in Humboldt say his greatest legacy is three generations of minor hockey participants and hundreds of junior hockey players from throughout Canada and beyond that would call him their friend,” the website’s biography of Petersen says.

Petersen had been living in a care facility in nearby Cudworth, Sask., in the past few years, according to Muench. He was last in Humboldt for the prayer vigil, held in the arena that bore its name, two days after the Broncos’ bus collided with a transport truck at a rural intersection, killing 16 people and injuring 13 others.

Muench said Petersen still listened to Broncos games on the radio and would pass along advice from the team through visitors from Humboldt.

In a tweet, the Broncos called him “a legend.”

“We wish to express our condolences to the Petersen family. Elgar was a part of so many lives and will never be forgotten,” the team said on Twitter.

The Broncos played the Nipawin Hawks on Saturday—the same team they were on the way to face in a playoff game when the crash happened.

Muench suggested Petersen may have had a hand in the Broncos’ 6-5 come-from-behind win against the Hawks.

“I told somebody I think Elgar must have made his way down to the rink and helped them out because they were down a couple of goals and came back and won it in an overtime shootout against the first-place team in the league. So that was sort of a fitting win for Elgar,” Muench said.