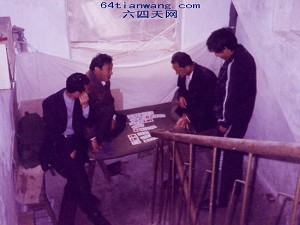 HUBEI, CHINA—On May 1, 2006, Ma Wenjun, a petitioner from Shayang County of Hubei Province, sent an email to China Tianwang Center for Human Right Affairs and provided pictures of him being monitored by 11 patrol members.

Since February 26, 2006, China Tianwang Center for Human Right Affairs reported several articles on Ma Wenjun, such as, “Eyes Were Dug And 3000-Yuan (US$ 400) Court Judgment Awarded,” “Ma Wenjun Escorted Home By National Security Captain,” “Blind Ma Wenjun And Spouse Being Escorted Home.” These reports introduced the misfortunes of blind petitioning citizen Ma Wenjun of Shayang County, Hubei as well as exposed the legal injustice and the persecution of his trying to petition.

Once there were as many as 13 patrol members who were in charge of Ma Wenjun, and they had only 30 yuan ($4) a day for meals.

After March 9, the 13 patrol members had their meal allowance increased to 50 yuan per day. Therefore, all the members of the patrol group are very grateful to Ma.

Ma Wenjun told us he is now the only one under surveillance in Shayang County, and fourteen years of his youth have been wasted. However, if there is any opportunity in the future, he would go again to petition in Beijing.

It has been learned that Ma Wenjun is in financial hardship. He and his wife live on a subsistence allowance of 210 yuan ($25) a month. His mother has an allowance of 120 yuan ($15) a month. However, that is not enough for the three of them so his 73-year-old mother collects garbage to supplement the family income.

China Tianwang Center for Human Right Affairs said that the Shayang County authorities have tried to prevent Ma from going to petition in Beijing and has sent many patrol members to monitor the Ma family, which constitutes a violation of a citizen's fundamental right to petition.

Ma Wenjun, 39, is from Shayang County of Hubei. In 1993, because he could not reach a divorce settlement with his ex-wife Fan Weiying, her family members tied him up and dug out his eyes. Later, the Intermediate Court in Jingmen City awarded Ma 3000 yuan in damages, but did not investigate the criminal responsibilities of his ex-wife's family members. Ma appealed his case, but the High Court in Hubei Province upheld the original verdict. Since May 1994, Ma Wenjun, in total darkness, has walked on the path of safeguarding the right to petition. His journey has lasted for 14 years.