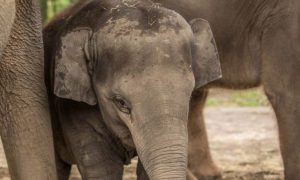 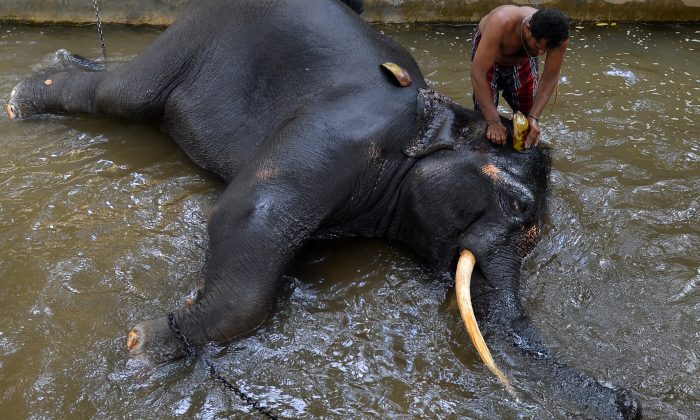 Elephant Sits on Handler, Crushing Him to Death

An Indian man was crushed to death by an elephant as he tried to wash it when he slipped on the wet floor just as the 5-ton animal sat down.

The moment was caught on CCTV footage, which shows the elephant handler, known as a mahout, washing a large tusker on the morning of March. 3 in Kerala, southern India.

According to some reports, police believe the mahout, named as Arun Panicker, ordered the elephant to lie down for a shower facing him, but the elephant mistook his instruction and laid down on the side where he was standing.

Forty-year-old Panicker had given the elephant instructions to lie down on its right side, according to the Times of India, as he hosed it down. However, the elephant laid down on its left side, prompting the mahout to strike it with what appears to be a stick or whip.

In delivering the heavy blow, however, Panicker can be seen losing his balance, his feet slipping under him and under the elephant just as it continues to follow his command, lowering itself onto his body.

Man killed when an elephant sits on him after he beat the animal with a cane to make it lie down https://t.co/YdeNtHFlSH

The video shows a second man—Panicker’s brother-in-law—rush over and try to get the elephant to stand once again, pushing on its hindquarters. When the animal doesn’t respond, he rushes off and returns with a big stick, but is only able to persuade the animal to move by pulling on its tusks.

He manages to pull Panicker out from under the elephants legs, but it is too late to save him.

According to the Times, Panicker died on the spot.

According to The Hindu, a local source said the mahout fell while swinging his hook, “He was standing on the left side of the elephant and instructed it to lie down to that side. But the animal initially lay down onto the other side and then suddenly changed to the left,” the source said.

Police have launched an investigation, according to local reports, and Panicker’s body has been sent for an autopsy.

One-third of all Indian elephants, an estimated 15,000, live in captivity.

The tradition of training elephants runs back thousands of years, with both Asian and African elephants used for warfare, transportation, and as status symbols.

Over time, only Asian elephants—revered as sacred in the traditional religious culture—continued to be kept and trained.

In modern times, their role has shifted once again, according to Ahimsa Campos-Arceiz, associate professor of Conservation Ecology.

“With the loss of their traditional “jobs” in forestry and transport, most captive elephants in Asia have joined the ecotourism industry,” Campos-Arceiz wrote in The Conversation.

No matter how some people may feel at the notion of keeping elephants in captivity, they simply cannot be released into the wild, he notes.

“All those thousands of tamed elephants in Asia can’t simply be released into the wild. Taming and captivity deeply changes their behavior It breaks their social ties and makes them lose their natural fear of people and released tamed elephants often stay near villages, causing severe conflicts with farmers and exposing themselves to easy retaliation. Humans therefore need to take care of those elephants currently in captivity,” said Campos-Arceiz.