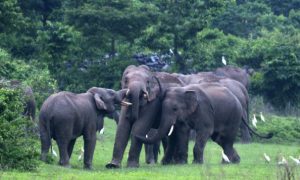 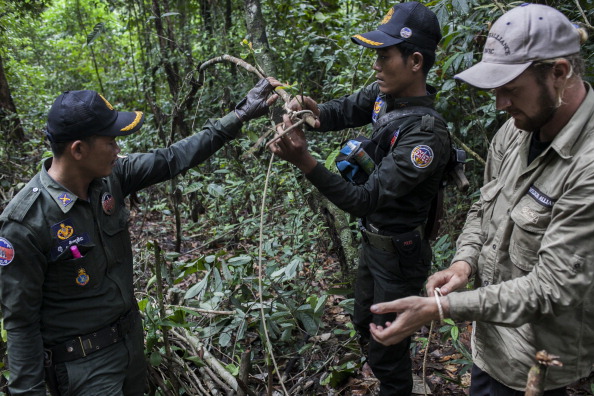 Rangers of the Wildlife Alliance dismantling an illegal trap built by poachers. (Photo by Nicola Longobardi/ASAblanca via Getty Images)
Environment

About 60 abandoned elephant capture pits that were created a decade ago in the forest ranges of Ernakulam district in Kerala pose a serious threat not only to the pachyderms for which it was first dug, but also other wild animals in these forests.

The practice of capturing elephants using pits was officially banned by the Kerala Government about three decades back. However a large number of pits are yet to be filled – open traps in the forest for unsuspecting wild animals. Not only elephants, even gaur, deer and snakes fall into the open pits and get trapped. According to wildlife experts, every year at least four or five incidents of elephants falling into pits had been reported from the district.

The exercise of enumerating the pits was carried out last month prompted by an accident involving two elephants. A mother elephant and calf fell into one of the abandoned pits in Kuttampuzha range of the forest. While the mother elephant managed to find her way out, the helpless calf had to be extricated with the help of forest officials.

The Kuttampuzha Forest Range has around 40 of these dug holes, while the remaining are in Edamalayar and Thundathil ranges. According to a survey, the depth of around 30 of them has been reduced over the years however the remaining ones are still an accident prone area for the wildlife. The mean depth of a pit is about three metres and measures six metres in circumference.

As per the animal rescue plan of the department, an escape route for the animals would be created by leveling the sides of the pits. As a result, the pit would be less deep and the impact of the fall would be minimized. The process is to be completed in a month’s time,

T.M. Manoharan, former Chief of Forest Force, said that some pits had been levelled by the department in the region during the early nineties. The sides of the pits were levelled and transformed into ramps to allow safe passage to animals. In order to decrease the depth of the pits, Earth was filled into the pit he said.

Elephant Task Force, an NGO engaged in elephant welfare activities, has sought the intervention of the Prime Minister and wildlife officials to fill up the elephant capture pits in the elephant corridors of Kerala. V.K. Venkitachalam, secretary of the organisation, said that the Forest Department was not properly equipped to aerially survey forest areas. The use of drones would be ideal for the purpose, he opines.

This article was originally written and published by Ramya Naresh, a contributing writer for indiasendangered.com. For the original article and more information, please click HERE.