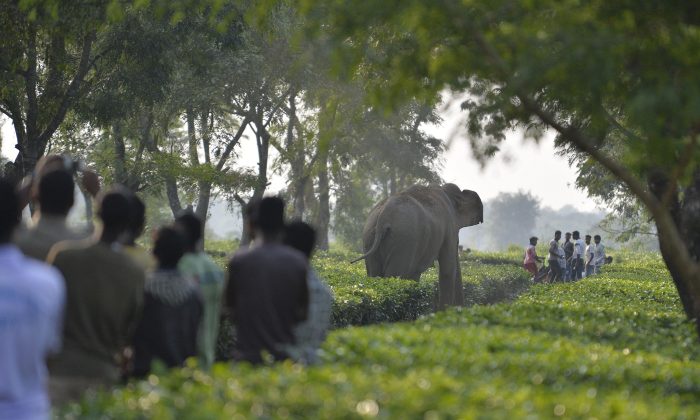 Indian villagers look on as a herd of 46 wild Asian elephants walk through the Gangaram Tea Garden on Nov. 29, 2017. Asian elephants are listed as endangered animals. As the human population increases the natural habitat of the elephants get destroyed and they are forced to move in farming areas where causing damage to crops. (DIPTENDU DUTTA/AFP/Getty Images)
India

An elephant trampled a man to death in a village in India as people pelted it with stones after it gave birth to an ill calf.

The incident happened in Ajnashuli village in the eastern state of West Bengal when locals learnt that an elephant was giving birth at a nearby dried lake.

Villagers had gathered around the elephant and her newborn only to find the anxious mother nudging the calf to get up. But the little elephant appeared too weak to respond to its mother’s prodding, reported the Daily Mail. The mother was likely sensing danger and wanting to move the new calf into the adjacent forest, according to Newsflare.

Locals then started pelting stones at the calf, pushing the mother into a rage. She started angrily chasing the crowd and trampled 27-year-old Shailen Mahato to death.

Elephant tramples man to death in India after ‘locals pelted it with stones when it gave birth to a calf’ https://t.co/MJl5m2kdk3

Elephants mothers are considered some of the best mothers in the animal kingdom. They have the longest gestation period among mammals—22 months and are very protective of their young ones.

“Elephants are intensely social and family oriented, and mothers and aunts will go to great lengths to protect and nurture their young,” said  Jan Vertefeuille, senior director for Advocacy and Wildlife Conservation at the World Wildlife Fund, according to Geek.com.

The elephant mother had gestured to the crowd to stay away by marking the ground with its feet before she launched at them, but those gathered did not heed her warning.

Who Are the Super Moms of the Animal Kingdom? https://t.co/yldf7MB6lL pic.twitter.com/cF9ZmwhaXt

Elephants give birth only once in three or four years, and since they mostly give birth to one baby, it’s a very big prenatal investment in one calf. They make great mothers because female calves live with their mothers for their whole life while the males leave the herd in teenage.

“Young females play an important role as ‘aunties’ to help raise the younger members of the herd, so they have had plenty of practice once they have their own young,” Vertefeuille said.

Soon after the tragic clash, the situation at Ajnashuli village became even more tense when ten other elephants appeared in the area. Angry elephants were seen chasing people out of the forest.

The agitated mother is still roaming around in the area and the local authorities have banned people from entering the surrounding forest.

The forest officials in the region are closely monitoring the elephant and said they will be able to drive it out only when it calms down, reported the Daily Mail.

In India, over 100 people are killed by elephants every year, according to WWF. National Geography’s documentary Elephant Rage points out that worldwide, this figure stands at 500.

The confrontation between elephants and humans is increasing because of the degradation of their natural habitats.

“While many people in the West regard elephants with affection and admiration, the animals often inspire fear and anger in those who share their land,” WWF said.

As forest lands are being fast converted into agricultural land, elephants also like to eat the crops that farmers are growing. “A single elephant makes light work of a hectare of crops in a very short time,” WWF explains.

This increasing man-elephant confrontation and the depletion of their natural habitat is having a detrimental impact on their population. WWF reports that the population of Asian elephants has decreased from 100,000 to between 35,000 and 50,000.

“I do think that elephants are becoming more aggressive towards humans in very compressed areas where they are being shot and harassed,” Caitlin O’Connell-Rodwell, a biologist at Stanford University, told National Geographic.

Elephants are the world’s largest vegetarians and O’Connell-Rodwell said they don’t attack any other animal for food, although food forms the context of most of their conflict with man.