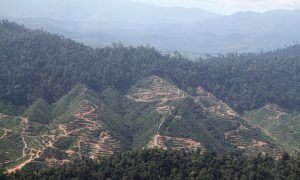 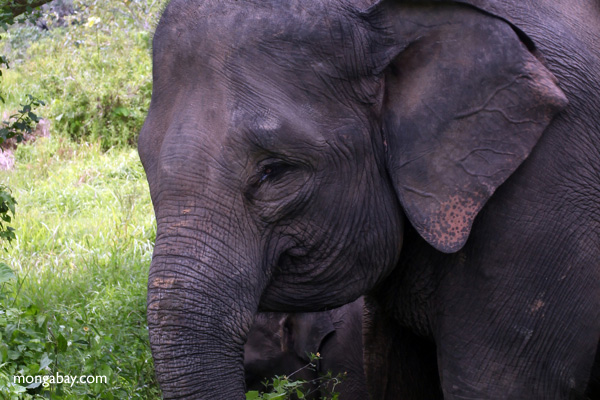 A Sumatran elephant of the sort that lives in the Leuser Ecosystem. Photo: Rhett A. Butler
Environment

A new report provides evidence that a supplier of palm oil giants Wilmar and Musim Mas is bulldozing valuable forests in Indonesia’s Leuser Ecosystem in violation of the companies’ zero-deforestation policies.

As of April 30, when the report’s author, policy development institute Greenomics Indonesia, conducted field checks to verify satellite imagery indicating the destruction, a Mopoli Raya Group subsidiary named Aloer Timur was clearing high-carbon stock (HCS) forest across its concession in Leuser, the only place on earth where Sumatran tigers, rhinos, elephants and orangutans still coexist in the wild.

Besides Wilmar and Musim Mas’ own commitments to purge their supply chains of deforestation, Aloer Timur’s activities would also seem to contravene the Indonesia Palm Oil Pledge (IPOP), a high-profile, joint sustainability pact the two firms have entered into along with fellow industry titans Golden Agri-Resources, Asian Agri, Musim Mas and the Indonesian Chamber of Commerce and Industry (Kadin).

Musim Mas is aware of the report and is talking with Mopoli Raya, which has shown a willingness to cooperate, a Musim Mas spokesman told Mongabay.

“We would like to stress that the volume procured from Mopoli Raya is very insignificant to Musim Mas, but immediate discard of them from the supply chain will not provide a solution to protect the Leuser Ecosystem,” the spokesman wrote in an email. “Our strategy is to provide our expertise in sustainable development to our third-party suppliers who lack the skills and resources to achieve sustainable supplies.”

The spokesman said Musim Mas would await the results of its engagement with Mopoli Raya before deciding whether or how to continue doing business with it.

“You can rest assured that our final decision will be in line with our Sustainability Policy and the IPOP but we need a little time to ensure that our decision is the best for all concerned.”

Wilmar has also reached out to Mopoli Raya.

“We will review carefully the nature of the gap and how it arose, the desire of the supplier to close the gaps and take those into account in deciding next steps, rather than taking knee-jerk reaction,” a spokesman wrote in an email.

“Our goal is to support our suppliers in tackling challenges and supporting the development and strengthening of a responsible and sustainable industry.”

US-based Rainforest Action Network (RAN) has called on Wilmar and Musim Mas as well as Golden Agri to impose an immediate moratorium on clearance in high-conservation value (HCV) areas, HCS forests and peatlands in the Leuser Ecosystem.

While all three companies have pledged to halt these activities, independent investigations continue to show the companies have not yet implemented these commitments in full.

Last year, RAN discovered Musim Mas was sourcing palm oil from a mill supplied by an illegal plantation within Leuser. Field researchers tracked the product from harvesting to processing to Musim Mas’ refinery at the Port of Belawan, North Sumatra province. Wilmar and Golden Agri were also said to be at risk of sourcing conflict palm oil.

“RAN’s call for a immediate moratorium aims to call on each trader to take immediate action to ensure that all third-party suppliers halt clearance of HCS forests, HCV areas and peatlands in the Leuser Ecosystem as a matter of priority,” RAN spokesman Emma Lierley told Mongabay.

She said that on April 24, Greenomics met the IPOP companies at its office in Aceh province, where most of Leuser is located, and urged them to do something about Aloer Timur.

“What makes us confused [is] that the clearance continues,” Vanda told Mongabay. “We assumed that our presentation on this case was an early warning to Wilmar and Musim Mas to take appropriate steps in earlier basis. Unfortunately, we didn’t see it, at least until May 3.” ‎

She added, “Greenomics is willing to work with Wilmar and Musim Mas to seek workable solutions, but, as promised by IPOP, we firstly want to see what kind of solutions they will offer in response to the current situation involving the concession.”

An earlier version of this article did not include Wilmar’s response, submitted after the initial publication.