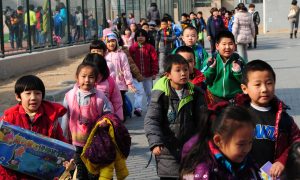 In recent years, a number of violent attacks have occurred at kindergartens and elementary schools in China.

On June 4, a school guard slashed numerous staff and students at Central Elementary School of Wangfu Town, Wuzhou City, Guangxi Province. The local government announced that the perpetrator was 50-year-old Li Xiaomin. About 40 people were injured, three seriously: the headmaster, another guard, and a student.

The perpetrator is said to be mentally ill. Initially, the school authorities did not want to hire him, but went ahead because his elder brother is the director of the local Education Committee.

An insider, who spoke to the Chinese Epoch Times on condition of anonymity, revealed that people outside the school heard tragic cries around 8 a.m. However, they could not enter the grounds because the school gate was locked. Although the police station is only 100 yards from the school, it was several teachers who, together, wrestled with Li and restrained him.

According to this witness, another guard, who was seriously wounded, struggled to approach the gate to open it; but, with blood all over his body, he was too weak to firmly grip the key. A couple of teachers rushed to help him and opened the school gate.

The witness said that the perpetrator went into the classrooms, knife in hand, to randomly attack people. He mainly jabbed at victims’ heads. Some students had fingers cut off. It was very frightening.
Some teachers revealed to the witness that Li has mental problems.