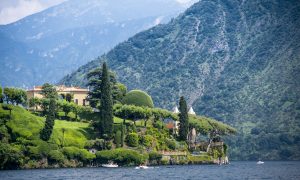 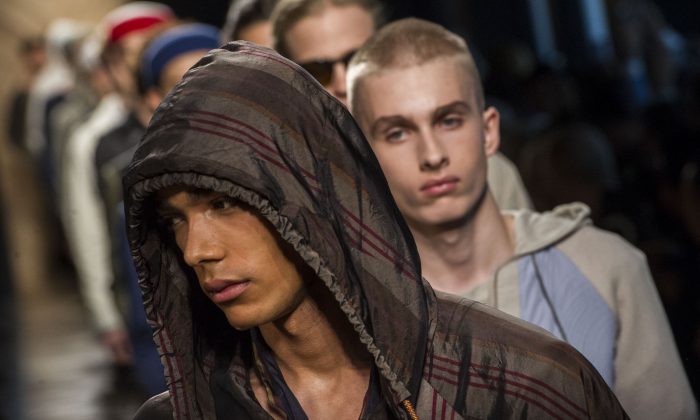 MILAN— Silky comfort is emerging as a trend on the second day of menswear previews for next spring and summer during Milan Fashion Week.

Bottega Veneta designer Tomas Maier joined colleagues Versace and Dolce&Gabbana in offering silken pajama-inspired looks, down to the classic stripe, to handle the warm weather. The outfits surprisingly can sometimes take the form of suits, becoming office wear for the style-minded.

Modesty in a Time of Boldness

Miuccia Prada says her menswear collection for next spring and summer is an exploration of the role of modesty in an era that requires self-promotion.

So, the issue of modesty isn’t so much about not showing skin, as one might assume when discussing fashion. Skin, the designer said, in fact is a sign of humanity.

Men were offered short shorts, in contrast to the Bermuda and cargo shorts on most other runways, and the female models, who have been included in Prada’s menswear shows in recent seasons, wore A-line mini dresses in painted python held on by chains.

Prada said the show aimed to analyze modesty and humanity in contrast with “the necessity of being bold, aggressive, and loud.”

“Because modesty is not any more for today,” Prada said backstage after the show.

The men’s looks had a slouchy feel, whether silken shirts open to the belt and haplessly tucked in or stiff leather-hooded jackets worn as if they could fall off. The looks were paired with trousers with contrasting pockets or loose-fitting short shorts.

Women’s outfits were neater with pleated skirts in contrasting panels and striped sweaters with pointy shoes. Accents like sequins and button holes were purposely exaggerated in graphic style. Hair was left purposely curly to convey humanity, normalness, the designer said.

Graphic images of rabbits, rocket ships, eyes, and lips cast a whimsical note, and Prada said she purposely chose “the most stupid ones” to operate on a graphic level. But she also said she intended to comment on censorship with the eye, which sometimes appeared with an X, and lips.

Actor Michael Shannon had a full-page spread modeling for Prada in Italian dailies Sunday, but he only met the designer behind the label after the menswear preview show.

“I like that Prada seeks out actors and people with character to help promote their product as opposed to just more anonymous model type persons,” Shannon said backstage, where he was hanging out with actor Willem Dafoe, who appeared in a previous Prada campaign.

The current campaign also features actors Tye Sheridan and Scoot McNairy and was inspired by album covers from the English punk era.

Backstage, Shannon was decked out in a cream color Prada summer suit with dark shirt and a star-covered tie. But in his real life, he says, he usually just wears a T-shirt and jeans.

“That’s because I play dress-up at work,” he said.

Maier’s spring/summer collection for Bottega Veneta took it outside—with looks and gear suitable for strolling in the Bavarian Alps or along the coast, if not all trail ready then at least lodge appropriate.

Maier said the collection “is about the fascination of a journey back to nature.”

Tapping his Teutonic origins, the German designer incorporated details from Lederhosen on lambskin suede trousers, from the drawstring waist closures to the button-down calves. He wisely eschewed the traditional checked button-down shirt, pairing the bottoms with, say, a cotton sweater and Gabardine jacket.

The looks were finished with sandals featuring rope details or hiking boots, both worn with two-tone ribbed wool socks.

And then Maier took his duffel and quilted backpack and headed for the seaside with cotton-pull-on pants that gathered on the calf, ready to wade right in, and crochet caps in bright purple and peacock blue.

The collection culminated with silken suits with a comfy pajama feel made out of cupro, a regenerated cotton fiber often used as a silk substitute, and paired with flip-flops.

The outdoor looks tended toward natural and washed-out colors, while the suit jackets and matching trousers were stronger shades of olive green, blue, and maroon, often in stripes.

Menswear star model Lucky Blue Smith continued his Milan run, taking a turn for Bottega after Versace and Philipp Plein. While Plein singled him out with a ride on the back of a stunt motorcycle, the 17-year-old American model was just one of the blokes for Bottega, No. 40 in the lineup.

Ferragamo Whimsy for the Youthful Dresser

Massimo Giornetti reached for a youthful audience with an idiosyncratic collection that included off-kilter graphic prints of cacti and monkeys, bold color panels on suits and pinstripes dressing up bomber jackets.

Menswear is a big part of Ferragamo’s heritage and represents 40 percent of its business, a rare event in the female-oriented fashion universe. Signaling the collection’s eclecticism, Ferragamo dressed up its showroom with art deco furniture, hot house plants, and a life-size carved gorilla—the dwelling of an eccentric adventurer.

For the more traditional customer, there were double-breasted and single-button suit jackets, often paired with more adventurous color-block tops. Giornetti tapped the brand’s leatherwear DNA with an ultra-luxurious graphic shirt that appeared to be panels of brightly colored crocodile.

Its more interesting, and updated, read of the classic suit included shorter jackets and contrasting stitching.

The most obsequious bag was a belted wallet, and shoes included sandals and sneakers with Velcro-closures covering the tongue. Baseball caps underlined the collection’s everyday nature.

The oft-overlooked belt is actually the brand’s big seller and came in rich black and brown combinations.

Missoni beckons men to India on a spiritual journey that incorporates the brand’s Western roots.

Angela Missoni’s menswear collection for next spring and summer centers on two must-have pieces for the modern-day nomad: the four-pocket field jacket and the tunic. The two elements “interweave Western utilitarianism with Eastern ornamentation and devotion,” Missoni said in the show notes.

Long beads or big scarves added to the ethnic mood. For travel-ready footwear there was the Malibu sandal—made with Peta-approved vegan material, according to the show notes—and Converse All-Star Chuck ’70 sneakers in Missoni’s military mesh.

Colors were key to conveying the spiritual element of the collection, including saffron, indigo, turmeric, marigold, vermilion, and ivory.

The looks pack neatly into a new collection of Globe-Trotter hard-topped suitcases lined with Missoni macro knit in both cross-body and trolley versions. The limited edition series is the result of a first-time collaboration between the brands.

Is there anything more refreshing to the fashion palate than blue jeans, a white T-shirt, and a pair of well-cut Khaki colored trousers that aren’t chinos?

It’s back to basics at Calvin Klein, where men’s creative director Italo Zucchelli presented a utilitarian collection for spring/summer 2016 that works for the man, and not the other way around.

The mainly monochrome looks featured T-shirts or sweaters with suit jackets and tailored trousers, or for more casual outings simply T-shirts with jeans or trousers with big tablet-size pockets, usually cuffed. Staple T-shirts were plain or with a faded graphic palm tree.

There were a series of sleeveless tops in black-red-and-gray waves for the more fantasy-minded.

For evening, simply add a little sheen to the fabric and you are off. In keeping with the uniformity theme, models’s hair was cut short and worn sleek.