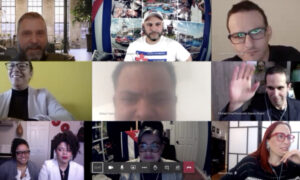 A House of Commons clerk prepares for a committee meeting in the chamber on April 29, 2020. (The Canadian Press/Adrian Wyld)
Canada

Electronic Voting Among Changes to House Rules Discussed by MPs

On Feb. 1, MPs from all parties weighed in on potential changes for the Procedure and House Affairs Committee to consider. Most wanted to reduce time spent on process and increase time for meaningful debate. Electronic voting was seen as way to do so.

“Our current system of voting is insane and needs to be modernized,” said Liberal MP Kevin Lamoureux. “What does not have a lot of value is having 500 votes on the same bill and all the vote results are identical.”

Lamoureux pushed back against MPs who wanted Fridays off and called for new technology “such that if a vote were called, a button right in front of members at their seats could be pushed. Then numbers would be instantly portrayed on a screen, or whatever it might be. Other jurisdictions have it.”

Bloc MP Mario Beaulieu agreed. “I personally find the way we vote to be rather absurd, especially how long it takes. Electronic voting would be just as secure and would save so much time. Perhaps this would allow for more debate in the House.”

“Travelling to Ottawa and back, I have a 20-hour round trip for what is a two-second action, standing in the House of Commons and voting. Virtual voting allows me to better serve my constituents,” said Julian, MP for New Westminster-Burnaby in B.C.

However, Conservative MP Pat Kelly has concerns. “There is so much pressure to allow members to isolate themselves and be caught up in their own bubbles,” he said, adding that he’s “opposed to the permanence of virtual voting.”

“It is invaluable to ensure that members be brought together in the chamber, and voting is a way to ensure members are there together,” he said.

David E. Smith, political science professor emeritus at University of Saskatchewan, told The Epoch Times that he agrees that there are drawbacks to the approach adopted since the pandemic of debating remotely.

“For the members themselves … hearing other people talking about an issue that you’re talking about re-frames that issue. So if you don’t actually hear that and you don’t hear it in the forum—the comments let’s say—I think a lot is lost,” Smith said.

“It’s not just … speaking but also listening to and sensing how other people respond to issues during a debate.”

MP Sherry Romanado had similar sentiments during the discussion on Feb. 1.

“I miss being in the chamber … [where] we are able to look at each other. We are able to gauge the reaction and give feedback. Unfortunately, we do not get those social cues on the screen,” she said.

The Quebec Liberal added, “We should define what suitable business attire is, because I do not think that stretch pants should be in the House of Commons, but that is just me.”

Some MPs said they wanted more time to weigh in on private member’s bills. Others wanted to continue the pandemic’s “committee of the whole” format that better allowed back-and-forth between those asking questions and those answering.

Yukon Liberal MP Larry Bagnell said he would even support having a separate chamber, such as what the UK’s House of Commons and Australia’s House of Representatives have, to allow for more meaningful debates on bills.

Conservative MP Erin Duncan said on Twitter that he likes the UK’s aversion to reading word-for-word from notes and that “scripted speeches & debate need to end.”

“[F]ull texts are a crutch that we use too easily. The UK has strict rules against this & their Parliament’s debates are much better off for it. Be real. Be authentic. Our Chamber & public debate will be better off,” Duncan tweeted.

“Debate in this chamber has become stultified,” he added. “I think that is the nicest term I can use with respect to what I see going on.”

Conservative MP Cathy McLeod wondered whether the discussion will actually lead to change.

“I have listened to these debates in the past and wonderful ideas and comments have come up that would help move us forward in a good way. Unfortunately, I have not seen us look seriously at adopting many of them.”

Nelson Wiseman, political science professor at the University of Toronto, said in an interview that one change citizens shouldn’t expect is for question period to become answer period.

“We can’t do that, not likely,” he said. “There were rulings years ago by the Speaker—although it can be changed of course—that when ministers answer they can say anything they want. They don’t have to answer questions.”

Wiseman said the non-answers that have become customary began soon after TV cameras came to Parliament in the late 1970s.

“The government figured out, hey, they’re just trying to embarrass us in front of this big TV audience, so no, now we’ll stop giving answers.”