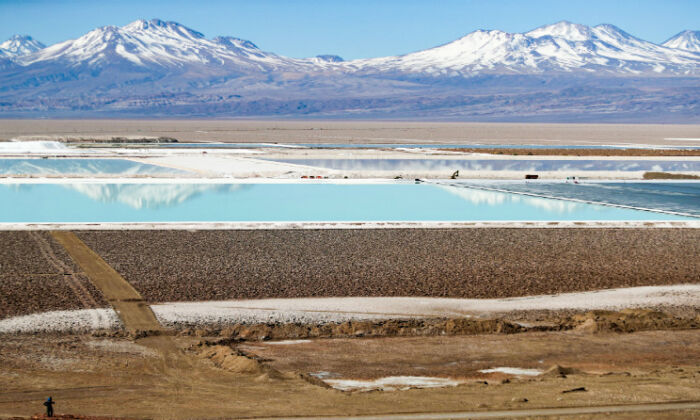 Brine pools from a lithium mine belonging to U.S.-based Albemarle Corporation, is seen on the Atacama salt flat in the Atacama desert in Chile, in 2018. (Ivan Alvarado/Reuters)
Environment

Electric Vehicles: Trading One Form of Hazardous Mining for Another

Sales of electric vehicles (EVs) reached a record 3 million in 2020, according to a report from the International Energy Agency.

That’s an increase of 40 percent from 2019 and is in contrast to overall car sales, which saw a 16 percent decrease.

The report further estimates that EV sales could reach 23 million by 2030, thanks partly to the Biden administration’s stated goal of half of all new vehicles sold in 2030 being zero-emissions vehicles.

Pointedly, lithium batteries are the preferred battery technology because they have the highest charge-to-weight ratio.

The push to transition to EVs is driven by key regulations by the United States, Canada, and the European Union, to reduce carbon dioxide (CO2) and greenhouse gas emissions from internal combustion engine vehicles, and transition to a more environmentally friendly future, according to the energy agency.

However, the U.N. Conference on Trade and Development (UNCTAD) reports that this uptick in EV adoption and increased demand for lithium batteries presents a significant environmental challenge.

“As demand for lithium increases and production is tapped from deeper rock mines and brines, the challenges of mitigating environmental risk will increase,” UNCTAD states.

Lithium in its pure form doesn’t occur naturally on Earth.

Seawater presents a possible future source of lithium, but because of extensive water, land use, and time requirements, extracting lithium from seawater isn’t feasible.

Importantly, due to its cost-effective nature, salar brines are the most commonly used method for lithium extraction—66 percent of global lithium resources are from lithium brine deposits, according to UNCTAD’s report.

Miners drill holes in salt flats to extract lithium and pump the salty, mineral-rich brine to the surface.

Once at the surface, the water evaporates and leaves a mixture of lithium salts, borax, manganese, and potassium. The mixture is then filtered and placed into another evaporation pool, where it evaporates for an additional 12 to 18 months.

After that period, lithium carbonate and hydroxide are extracted and can be used to make the cathode materials for batteries.

Materials such as cobalt and nickel are processed with lithium chemicals to produce battery electrodes.

According to a report from the Institute for Energy Research (IER), it takes approximately 500,000 gallons of water to extract one metric ton of lithium from salar brines.

If water were in abundant supply, this heavy demand might be overlooked. But more than 50 percent of lithium resources are located in the “lithium triangle” of Chile, Bolivia, and Argentina, and, UNCTAD reports, this area is one of the driest on Earth.

On the jagged plain of Chile’s Salar de Atacama, the Department of the Interior’s U.S. Geological Survey (USGS) reports that it hasn’t rained “for as long as people have been keeping track.”

The result is a diverse but fragile ecosystem with scarce water resources.

However, the Salar de Atacama is the largest salt flat in Chile and is rich in lithium salts just beneath the surface. Consequently, it’s become a significant source of lithium mining.

Indeed, 65 percent of the region’s water goes toward mining activities, according to IER.

The result is a lack of water that’s forced local farmers—who grow quinoa and herd llamas—and nearby communities to abandon their ancestral settlements and find water elsewhere, according to UNCTAD.

“We used to have a river before that now doesn’t exist. There isn’t a drop of water,” Elena Rivera Cardoso, president of the Indigenous Colla community of the Copiapó commune, told the National Resources Defense Council (NRDC).

“And not only here in Copiapó but in all of Chile, there are rivers and lakes that have disappeared—all because a company has a lot more right to water than we do as human beings or citizens of Chile.”

Copiapó is the capital of Chile’s Atacama region.

Additionally, the Atacama region is critical for migratory birds and other animal species, according to NRDC. But, mining activities are impacting these animals, 17 of which are considered endangered in Chile.

Lack of water isn’t the only problem in lithium extraction. UNCTAD reports that breathing lithium dust causes respiratory tract irritation, and prolonged exposure to lithium can lead to pulmonary edema.

In May 2016, a toxic chemical leak from the Ganzizhou Rongda Lithium mine contaminated the Lichu River in Tibet, killing farm animals and thousands of fish, according to UK organization Free Tibet.

The 2016 event was the third such leak in seven years, according to IER.

In Nevada, researchers studying the effects of lithium mining found that fish as far away as 150 miles downstream were affected, according to IER.

Lithium mining isn’t the only concerning factor with lithium-ion batteries. There are additional chemical elements in batteries, such as cobalt and graphite, which pose social and environmental challenges, according to UNCTAD.

In its 2022 report, the USGS reports that in 2021, more than  70 percent of the global cobalt production came from the Democratic Republic of the Congo (DRC) and that southern Congo sits atop an estimated 3.5 million metric tons, which is almost half of the world’s known supply.

The problem, according to UNCTAD, is that dust from cobalt mines often contains toxic metals such as uranium, and DRC mines may contain sulfur minerals that can generate sulfuric acid.

When exposed to air or water, sulfuric acid can lead to acid mine drainage, polluting rivers and drinking water for hundreds of years.

And up to 40,000 children are estimated to be working in these mines under slave labor conditions.

In 2021, China was the leading graphite producer, producing an estimated 79 percent of the world’s total output, according to the USGS report.

The USCTAD report says that graphite mining has similar environmental impacts to cobalt mining; it leads to contaminated soils, water, and toxic dust. ­­­

Finally, in addition to the above-stated problems, mining battery components emit a fair amount of CO2, which varies based on specific mining and manufacturing processes.

“There are carbon dioxide and other greenhouse emissions that come with the process of extraction,” Zeke Hausfather, climate research lead at the nonprofit Berkeley Earth, told student organization Climate360. “[It’s] not like CO2 comes out of the lithium, but it does take energy to mine things—today many of those systems involve emitting CO2.

“There’s emissions associated with the processes of mining like CO2 emissions creating sulfuric acid and other things used in the mining process—the life cycle of all of these things involves some environmental impact.”

“If an electric vehicle is using a 40 kWh battery its embedded emissions from manufacturing would then be equivalent to the CO2 emissions caused by driving a diesel car with a fuel consumption of 5 litre per 100 km in between 11,800 km and 89,400 km before the electric car even has driven one meter,” Circular Energy said.

“While the lower range might not be significant the latter would mean an electric car would have a positive climate impact first after seven years for the European average driver.”