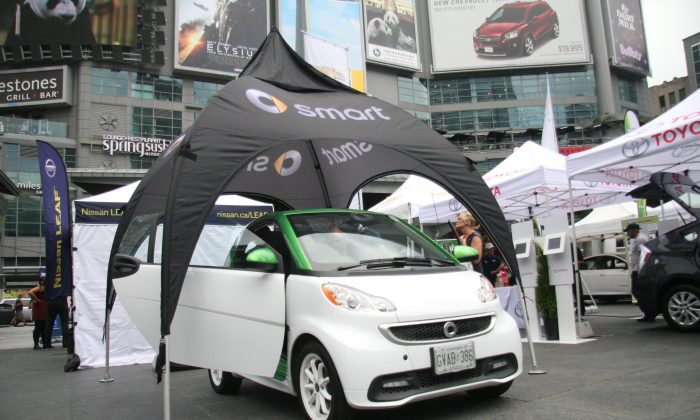 The 2-seater electric Smart car was open for inspection at Dundas Square during the Plug’n Drive Electrical Vehicle Day where visitors could test drive electric vehicles and learn all about them. (Kristina Skorbach/The Epoch Times)
Canada

Electric Vehicles Rev up in Toronto

What the customers and experts say
By Kristina Skorbach

Traditionally thought of as incompetent with a small range before needing a charge, the electric engine technology has come a long way. Now, most of the leading car manufacturers are introducing fully electric or hybrid models. The cars have considerable pros and cons.

On top of the higher price tag of a comparable gas/diesel car, a typical electric vehicle needs a charging station. Installation of an extra 240V plug, which speeds up charging of the battery by two times or more and is recommended for fully electric vehicles, may not be permitted in some condominiums.

Another thing is coping with long distance drives, especially if you do them often. Although there’s always the option of renting another vehicle along the way, switching cars with a friend, or using public transportation, some buyers may opt for having a back-up gas-powered vehicle. In many cases, a hybrid can be a good solution.

Electric, however, has many benefits other than producing zero emissions at the car level. It’s noise-free, substantially less costly to run, fun to drive because of instantaneous maximum torque, and it doesn’t use up charge when idling in traffic. Electric cars also come with incentives from the Government of Ontario: rebates of up to $1,000 for installation of the 240V plug and up to $8,500 for the vehicle.

Toronto resident Tom Sommerville who has owned an electric Smart car for 2.5 years, notes that in 2012, he paid $214.17 for charging up his car for the whole year. Sommerville, who lives at Don Mills and Lawrence, commutes into the downtown core every day in his Smart car, and uses it for any other errands or short trips like dropping off his daughter at a music lesson.

The Smart is very convenient for Sommerville, “I treat it like a cell phone, I get home at night, I plug it in, it’s ready to go in the morning,” he says.

“It’s very much a city car,” Sommerville said. Although with a family of five, Sommerville says that he also has a Honda Accord, which is mostly used by his wife.

Sommerville was part of a pilot, initiated by Mercedes and Toronto Hydro, that assessed how an electric car would be used by a regular car owner. He says his car has 20,000 km on the meter. He hasn’t been experiencing many technical difficulties with the car and neither has he noticed the battery wearing down.

“The surprising thing has been… how much fun it is to drive,” he said. Because the electric technology is more reactive, now, the internal combustion cars seem clunky with their transmission, lag, and noise. “I feel like when I’m driving gas powered cars, it’s not responsive,” he said.

“There’s so much pick-up, it’s like driving a sports car in a way,” he said. Also the small and nimble Smart allows Sommerville full flexibility with driving and parking around the city.

Another Toronto resident, who was the first person to purchase a Chevrolet Volt, Nate Redmon, has also found it inexpensive and convenient to maintain his hybrid car.

Since September 2012, when Redmon purchased the Volt, he has put 47,000 km on the car, doing an average of 47 km per day which includes city and highway driving. Redmon is semi-retired, he lives at Yonge and Finch with his partner and says he uses his car every day.

The Volt costs him $19.76 a month, since most of the time he uses the 65-75 km range that the car goes on electric before it switches to the gas engine. He says that he goes electrically 60 percent of the time.

“I haven’t put gas in this car for three and a half months,” he said.

Redmon also says he hasn’t yet needed an oil change, and he gets 3 to 4 times more usage out of brake pads than an average gas-powered car. Redmon also finds it practical to step on the gas and go in winter, without having to wait for his car to warm up.

A word from the experts

Every year, the Plug’n Drive non-profit organization stages events around the province to raise awareness of electric vehicles. It was no different this year in Toronto during their mid-July event, when a dozen electric and hybrid cars were parked on Dundas Square.

The organization started off with educating people about electric technology for cars. “…The cars were starting to become available, but there was a need to help explain to people why they should consider an electric car, what’s good about it,” said the President of the organization, Cara Clairman.

Recently, Plug’n Drive has been getting involved in developing infrastructure, which is one of the barriers in the province, according to Clairman.

“It’s new … people are always hesitant to try something new,” she says. The first generation of electric vehicles might have put off some consumers seeming less powerful, and more like a golf cart, says Clairman.

Another reason why consumers are not jumping on the electric train is because there’s always the questions of range. Clairman says that the freedom to drive large distances on a tank of gas seems more practical, since most electric vehicles go an average 100-150 km on a full charge. There is, however, the more costly option of the Tesla Model S which can do up to 480 km on a single charge.

Manager of Capital Projects and Electric Vehicles at Toronto Hydro, Tom Odell said that the electric vehicle market is often compared to the increase in interest of hybrid cars and so far “it’s performing reasonably well,” he said.

“It takes a long time to turn over an automotive fleet of vehicles on the road,” Odell said about the automotive market. Even if everyone bought an electric car today, it would take 10 years before all the cars on the road were electric, because there’s a cycle of replacing the whole industry, according to Odell.

Toronto Hydro encourages all those who purchase electric vehicles to register with the organization to help track their electricity usage and measure the impact of the cars on the grid.