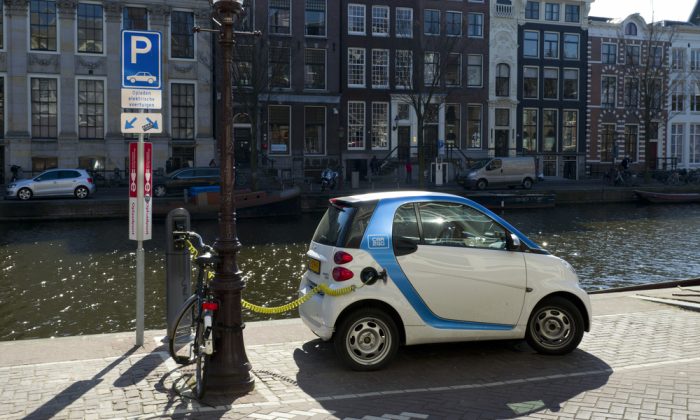 The electric car trend is still to take off in the UK, with drivers largely put off by up-front costs, according to a survey by the Department for Transport.

A measly 5% of respondents were thinking about buying an electric car or van, and only a fifth of them were considering doing so in the near future. Just 0.3% already owned an electric vehicle meaning that, at best, there are a little over one in 20 people who have any interest at all in owning an electric car. In contrast, 14% had contemplated buying a car or van but decided against it, while the most damning statistic is that over half, 56%, had not even thought about the possibility of going electric.

There are areas where electric vehicles have established themselves as part of everyday life. There are few more British sights than the electric milk float going about its door-to-door deliveries at the crack of dawn. There are also many successful industrial applications of electric vehicles, such as fork lift trucks or pallet moving vehicles. The reason these applications have had traction is that there is an identifiable niche that the electric powered vehicle option fulfils better than conventional engines. The milk delivery benefits from a quiet electric engine which doesn’t wake up the snoozing masses. Similarly, regulations and health and safety concerns makes electric engines a better choice than petrol and diesel in factories.

But for the general public, electric vehicles seem irrelevant. Up to three quarters of the electric cars and vans on the road in the UK are run by businesses and local authorities in fleets, where they can play a major role in meeting emissions targets and improving operating costs.

Despite this, electric vehicle sales are often claimed as “record breaking” and at an “all-time-highs” in Britain. Unsurprising, since they are coming from such a low base. Indeed, the latest figures show a spectacular increase of some 121% on pure electric car sales from this time last year, with almost 2,000 such vehicles purchased in 2014. But that figure looks weak in comparison with the 1.1m cars sold overall this year – it is in fact just 0.2% of the overall market.

Buyers in other European markets are more positive towards electric cars. In Denmark and the Netherlands, electric vehicles make up 5% of all cars, rising to 20% in Norway where there are more than 35,000 electric vehicles on the road amongst a population of less than 5m. Success in a market like Norway can be attributed less to environmental consciousness than it can well-advised economics: it’s possible to save up to £1,000 a year running an electric vehicle.

They also get a number of benefits including VAT exemption, free car tax, parking and road tolls, as well as various employment tax benefits. In addition, conventional cars (with internal combustion engines) are subject to numerous heavy taxes, including a road use tax and a CO2 tax that makes Norwegian petrol the most expensive in the world.

Of course, electric cars also receive government incentives in the UK – most notably the purchase cost reduction of up to £5,000 (£8,000 for vans). But even with this the electric options are still notably more expensive than internal combustion engine equivalents. The subsidy also seems to affect second-hand car value, which depreciates markedly.

There is also free car tax, which saves you up to £470 a year, and exemption from the London congestion charge of £9 a day, though these incentives are also available to many low emission diesel models, and some low emission petrol vehicles too – of course, hybrid electrics are included too.

This rewards system is less favourable in comparison to that in Norway, where the total incentives on offer will amount to roughly half the price of the car. But it is the running costs in the UK that will save the buyer the most, with a difference of £200 a year to power an electric such as the Nissan Leaf versus £1,300 for a similar sized petrol model. However, despite the impressive value here, many will be put off by the high purchase costs.

The Department for Transport survey highlights how emphasising running cost savings could improve the public attitude. A massive 85% of respondents saw cost as the most important factor to consider when buying a car. At the same time, a third were put off electric vehicles because of the cost – second only to battery issues around so called range anxiety and doubts over present technology, which can be overcome with education, experience and improving infrastructure.

Overall, reducing cost was the most popular means to encourage electric vehicle sales, in line with a US survey in one of the most successful electric vehicle markets in the world, California, where 37% of owners were driven by economic not environmental concerns.

There are other means to get the benefit from electric vehicles such as car sharing and car clubs, options which have the potential to be more environmentally friendly and cheaper. But we appear wedded to a consumer capitalist car system whereby private ownership is all-important. While commentators may believe we are at a tipping point, significant market penetration of electric cars is still some time away unless these cars and vans become (and are widely seen as) more affordable for ordinary people.

Daniel Newman does not work for, consult to, own shares in or receive funding from any company or organisation that would benefit from this article, and has no relevant affiliations. This article was originally published on The Conversation. Read the original article.