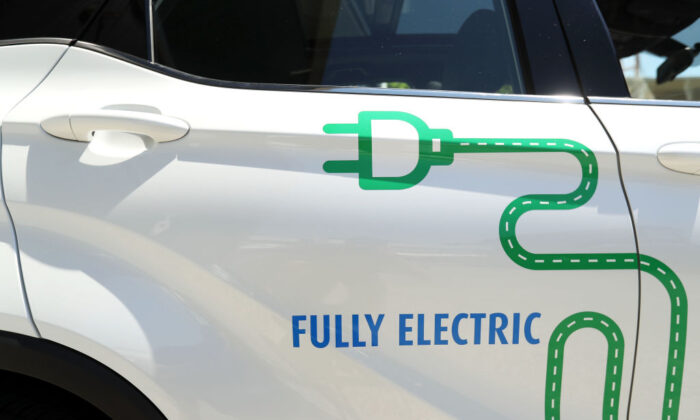 A general view of the stickers on an EV Automotive E3 Glory crossover SUV is seen ahead of the Electric Vehicle Show 2019 at Sydney Olympic Park in Sydney, Australia, on Oct. 25, 2019. (Mark Kolbe/Getty Images)
Australia

Nationals MP Barnaby Joyce said for many voters in his electorate of New England, a vast expanse of northern New South Wales, EVs were too expensive and impractical for long distances.

He pointed to the Tesla Model S that has a range of under 500 kilometres saying it was “beyond the price range” of families living in “weatherboard-and-iron” homes.

Federal Treasurer Jim Chalmers has estimated employers can save around $9,000 a year if they provide a $50,000 EV to a worker. While an individual can save $4,700.

The move forms part of the Labor government’s embrace of net-zero including the recent passing of the Climate Change Bill to enshrine a 43 percent emissions reduction target by 2030, up from the previous target of 26-28 percent.

Not Suitable for the Outback

Independent MP Dai Le, who represents the working class electorate of Fowler in Western Sydney, said the government’s EV plan did not consider all issues linked with rapid electrification of the road network.

“Whilst the government proposes to invest A$39.3 million for 117 fast-charging stations, there is a lack of detail around the time line of this rollout and, more importantly, whether it will match or, preferably, precede a greater uptake in EVs,” she said, suggesting a higher take-up of hybrid vehicles that will not put as much pressure on the energy grid.

While Colin Boyce, the Liberal National MP for the regional seat of Flynn in central Queensland, said EVs were not suitable for blue-collar work.

“The Ford Ranger, the Toyota HiLux, the Nissan Navara and Isuzu D-Max are among the most popular cars sold in Australia today. They are in many cases the working-man’s car, and are not currently available in an electric or hybrid version. I ask: will there ever be an electric version?” he said.

The MP also said pointed to research from Professor Miranda Steward, director of the Tax Group at the University of Melbourne Law School, who said tax incentives would ultimately benefit high-income earners who could afford EVs.

“Once again, we see pious virtue signalling and arguments of transition given by the wealthy, who take into no account the ramifications inflicted on those who live in the practical, real world,” he said.

Boyce also outlined research from salary packaging group, McMillan Shakespeare Group, that found one hour of charging for an EV would result in 10 kilometres of travel.

“I find that revelation quite astounding,” he said, adding that since May he had travelled around 12,000 kilometres across his electorate.

Labor Treasurer Chalmers finalised debate on the Bill saying it was “disappointing, but not especially surprising” to hear opposing MPs not supporting “tax cuts” for EVs.

He said the move would “bring down the cost of living and also incentivise the types of cars we increasingly want to see on our roads.”

“This is a government that understands the opportunities of acting on climate change and of cleaner and cheaper energy and low emission cars. We intend to grab those opportunities for the benefit of the Australian people.”