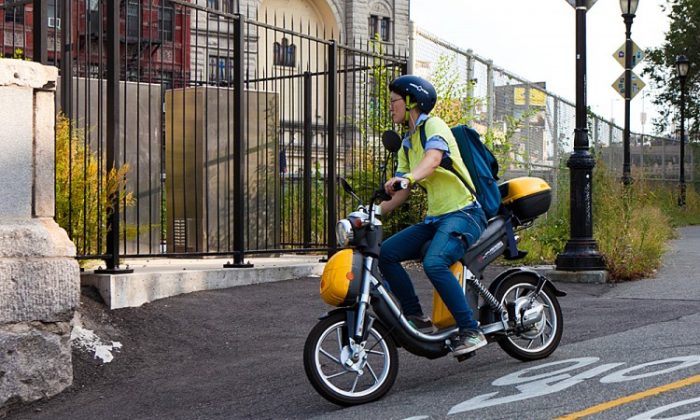 A man on his electric bike on Sixth Ave. (Amal Chen/The Epoch Times)
US

Electric Bikes in New York May Be Legal, or Maybe Not

Depends who you ask.

During educational presentations, the city’s Department of Transportation tells business owners that electric bicycles are illegal, because they cannot be registered with the state Department of Motor Vehicles.

But the complexity behind electric bike laws came up during a Sept. 6 City Council hearing, when Councilwoman Jessica Lappin said that electric bicycles are legal—provided they go under 15 miles per hour—according to the New York City Administrative Code.

Yet federal law states that “low-speed electric bicycles” are consumer products, according to a 2002 amendment by Congress to the Consumer Product Safety Act. Any two- or three-wheeled vehicles, with an electric motor of less than 750 watts, that have a maximum speed of less than 20 miles per hour when powered solely by the motor, do not need to be licensed by any Department of Motor Vehicles (DMV).

Martinez said that the 2002 law was part of the reason electric bikes have become so popular.

New Yorkers on electric bikes are sometimes ticketed by the NYPD for having an unregistered motor vehicle, according to Martinez, citing people he has interacted with.

The bikes are a good form of transportation, said Martinez, especially for those who travel long distances and people who are not in good enough shape for regular bicycling, and should be allowed in the city.

Staff from the city’s Department of Transportation (NYCDOT) told Lappin they would look into the issue regarding the conflict between state and city law, with no mention of federal law. The department didn’t return a query asking if it had any update to its interpretation of the law.

Legislators have attempted to change state law to allow electric assisted bicycles up to 20 miles per hour, mirroring federal law. But one such proposed amendment, after passing the Assembly, hasn’t moved in the state Senate since February 2010. Another has been in the Rules Committee since June 21.

State and local governments have set their own policies, making for “a patchwork of regulations,” said Matt Wempe, state and local advocacy coordinator for the Washington-based League of American Bicyclists.

In California, electric bicycles, or “motorized bicycles,” are defined as two- and three-wheeled devices that can’t travel faster than 20 miles per hour, with further restrictions on motor power, according to the California DMV. Operators don’t need a license, but do need to be 16 and need a helmet.

Maryland law covers “mopeds,” or bicycles that are “designed to be operated by human power with the assistance of a motor,” with the motor having a rating of 1.5 brake horsepower or less. The mopeds are allowed on roads with speed limits up to 50 mph, with operators needing parental consent if under age 18.

The scarcity of traffic data for electric vehicles is the motivation for a July City Council proposal that would separate bicycles and electric bicycles in the data published on the NYPD’s website.

A man who answered the phone at Kysmo Electric Bike Shop said that the electric bikes are legal. The prices range from $450 to $1,100, with most capable of a maximum speed of 20 miles per hour.

But at NYCeWheels, on the Upper East Side, an employee said he doesn’t think they are legal, unless you’re riding them on a “bike path in your backyard.

“You can’t ride them in public,” he said, adding that the shop has never had anyone come in and tell them to stop selling the bikes and many people buy the bikes.

Should New Yorkers worry about being ticketed while riding electric bicycles due to the differences among city, state, and federal laws?

When reached by phone, the NYPD directed The Epoch Times to submit an email query. Two such queries went unanswered.

A cop just north of Times Square on Monday told The Epoch Times he wasn’t sure whether electric bicycles are illegal, but he believes all motorized vehicles need licenses.

In the end, what’s legal and illegal should be clearer, according to Lappin.

“I think we have to have clarity about what is allowed on our city streets,” she said at the Sept. 6 hearing. “We just need clarification.”