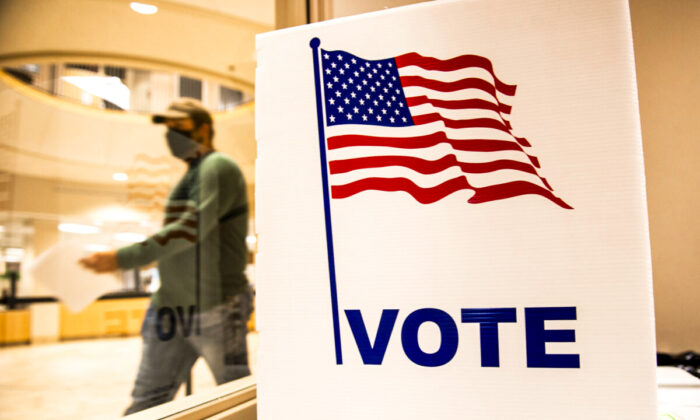 A voter leaves after filling out a ballot in Minnesota on Sept. 18, 2020. (Stephen Maturen/Getty Images)
Viewpoints

Electoral Incongruities—Observations From Across the Pond

Even before the 2020 election it was known that Iranian hackers were allegedly subverting it. Seyyed Kazemi, 24, and Sajjad Kashian, 27, allegedly sent tens of thousands of e-mails to Democrat voters, claiming to be the Proud Boys and threatening to “come after” them if they didn’t vote for Trump.

Also posing as the Proud Boys, they allegedly sent Republicans stories of Democrat electoral wrongdoings. The Justice Department called this “a coordinated conspiracy in which Iranian hackers sought to undermine faith and confidence in the U.S. presidential election.”

But were the latter scams an example of subterfuge to cover up their real intentions?

Iran would appear to have more to gain from a Democrat victory. Trump had pulled out of the Iranian nuclear deal and assassinated their national hero, Qasem Soleimani, whereas a Biden administration might just get that generous deal of President Barack Obama’s going again.

By October 2020, the FBI discovered that the hackers had allegedly accessed the voter registration databases and stolen the information of over 100,000 individuals living in Alaska. They had also tried this in at least 10 other states, though less successfully.

Yet on Nov. 12, 2020, the Elections Infrastructure Government Coordinating Council and Sector Coordinating Executive Committees issued a joint statement that claimed “the November 3rd election was the most secure in American history.”

Someone who did take those alerts very seriously was the former CEO of Overstock.com, Patrick Byrne.

In an exclusive Epoch TV interview with Roman Balmakov, he explained how on the evening of Dec. 18, 2020, he visited the White House together with Gen. Mike Flynn and Sidney Powell and was able to secure an unscheduled meeting with the president.

He claims President Donald Trump had no idea about the Iranian involvement and criticized his White House counsel Pat Cipollone for not having informed him. Byrne suggested that the foreign interference gave the president the legal powers he required to send investigators to election centers around the nation, and they agreed to focus on six key states.

However, after his unexpected guests had left, Byrne says Trump was talked out of the plan by Rudi Giuliani, who feared they could be arrested as he didn’t feel the evidence was strong enough.

With that option gone, Trump then sent out his tweet about the “Save America Rally” in the early hours of Dec. 19, inviting people to come to D.C. for a peaceful protest.

Five days after the protest, the British-born intelligence analyst Fiona Hill wrote a damning opinion piece for Politico, where she called the demonstration a “coup” that was thought up and planned by Trump, whom she compared to both Napoleon Bonaparte and Vladimir Putin.

For proof, the former White House staffer wrote, “I know the signs of a coup when I see them.”

Fox News reporter Chad Pergram called Jan. 6 “the most significant breach of an American government institution since the British burned the Capitol after the Battle of Bladensburg on August 24, 1814.”

Reporter Doug Burton, who was there to cover the rally, later interviewed a retired civil servant and Trump supporter called Tricia, who told him: “Police just let us in. We walked into the Capitol from the northwest side about 2.30 pm.” Photos and video on her cellphone show Capitol Police standing silently in sentry positions.

After 30 minutes of taking photographs and “praying for a miracle,” she was ushered outside, past marble steps splattered with Ashli Babbit’s blood.

When another of the protesters, the “QAnon shaman” Jacob Chansley, eventually received a 41-month prison term, Judge Royce Lamberth told him: “You didn’t slug anybody, but what you did here was actually obstruct the functioning of the whole government. It’s a serious crime.”

Compare that to the treatment given to the female gay activists who abseiled into the House of Lords’ chamber from the visitors’ gallery to disrupt the functioning of the UK parliament in 1988.

They were protesting at the Section 28 law that banned the promotion of homosexuality. Thankfully, none of them were shot in the throat like poor Ashli Babbitt, and none of them were held in solitary confinement for years without charge.

The two women who went over the balcony were merely told to leave the building. Their four accomplices were released after being held in a cell in the Big Ben tower for several hours. Afterward, they all went to the pub to celebrate.

It was seen as a stunt and no more than that—rather like Chansley wearing his shaman regalia and sitting in Mike Pence’s chair. Oh wait, he got three years and five months.

The committee investigating the tragic incident have a problem.

Almost a year ago, on Aug. 20, 2021, the FBI claimed scant evidence exists that the Jan. 6 protest was “the result of an organized plot to overturn the presidential election result,” Reuters reported. Nevertheless, they continue to claim that it was all Trump’s idea.

Vice chair Liz Cheney is one of two Republicans sitting on the committee. The other, Adam Kinzinger, also voted to impeach Donald Trump. Cheney recently stated, “President Trump summoned the mob, assembled the mob, and lit the flame of this attack.”

So, will charges be brought to arrest the former president before the midterms? Biden’s America already has political prisoners and show trials, so why not lock up opponents too?

Insurrection is the juicy misnomer still being used to describe the events at Capitol Hill, despite none of the protesters who entered the building being armed.

The USLegal.com definition of insurrection states: “Insurrection is different from riots and offenses connected with mob violence. In insurrection there is an organized and armed uprising against authority or operations of government whereas riots and offenses connected with mob violence are simply unlawful acts in disturbance of the peace which do not threaten the stability of the government or the existence of political society.”

But, says the U.S. House Select Committee on the Jan. 6 attack, they did “threaten the stability of the government and the existence of political society.” It was a “criminal conspiracy.”

Some questions the committee are unlikely to ask are: Who let the protesters into the secure building? What happened to the National Guard troops that Donald Trump authorized on Jan. 4?

And what about: Were the Iranians working alone or with anyone on the inside?