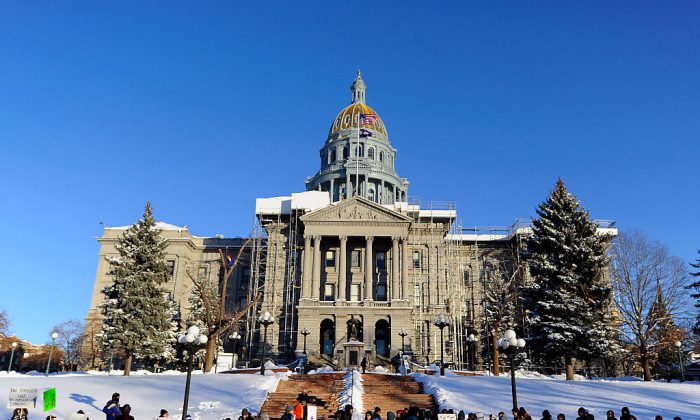 People demonstrate against US President-elect Donald Trump on the eve of the Electoral College vote, in Denver, Colorado on Dec. 18, 2016. (CHRIS SCHNEIDER/AFP/Getty Images)
US

WASHINGTON—Electors are set to gather in every state on Monday to formally elect Donald Trump president even as anti-Trump forces try one last time to deny him the White House.

Protests are planned for state capitals, but they are unlikely to persuade the Electoral College to dump Trump. An Associated Press survey of electors found very little appetite to vote for alternative candidates.

Republican electors say they have been deluged with emails, phone calls and letters urging them not to support Trump. Many of the emails are part of coordinated campaigns.

“The letters are actually quite sad,” said Lee Green, a Republican elector from North Carolina. “They are generally freaked out. They honestly believe the propaganda. They believe our nation is being taken over by a dark and malevolent force.”

Wirt A. Yerger Jr., a Republican elector in Mississippi, said, “I have gotten several thousand emails asking me not to vote for Trump. I threw them all away.”

A joint session of Congress is scheduled for Jan. 6 to certify the results of the Electoral College vote, with Vice President Joe Biden presiding as president of the Senate. Once the result is certified, the winner—likely Trump—will be sworn in on Jan. 20.

The Electoral College was devised at the Constitutional Convention in 1787. It was a compromise between those who wanted popular elections for president and those who wanted no public input.

The Electoral College has 538 members, with the number allocated to each state based on how many representatives it has in the House plus one for each senator. The District of Columbia gets three, despite the fact that the home to Congress has no vote in Congress.

To be elected president, the winner must get at least half plus one—or 270 electoral votes. Most states give all their electoral votes to whichever candidate wins that state’s popular vote. Maine and Nebraska award them by congressional district.

The AP tried to reach all of the electors and interviewed more than 330 of them, finding widespread aggravation among Democrats with the electoral process, but little expectation Trump would be derailed.

Some Democrats have argued that the Electoral College is undemocratic because it gives more weight to less populated states. That is how Hillary Clinton, who got more than 2.6 million more votes nationwide, lost the election to Trump. Some have also tried to dissuade Trump voters by arguing that he is unsuited to the job. Others cite the CIA’s assessment—with no evidence—that Russia engaged in computer hacking to sway the election in favor of the Republican.

“When the founders of our country created (the Electoral College) 200-plus years ago, they didn’t have confidence in the average white man who had property, because that’s who got to vote,” said Shawn Terris, a Democratic elector from Ventura, California. “It just seems so undemocratic to me that people other than the voters get to choose who leads the country.”

But despite the national group therapy session being conducted by some Democrats, only one Republican elector told the AP that he will not vote for Trump.

Those laws are rarely tested. More than 99 percent of electors through U.S. history have voted for the candidate who won their state.

Trump Says Michelle Obama’s ‘No Hope’ Comment About the Past

Electors are selected by state parties, and so are often insiders who can be trusted to vote for the party’s candidate. Many Republican electors said they feel duty-bound to honor their pledge to vote for the candidate who won their state, regardless of how they feel about Trump.

Still, some anti-Trump activists have been getting creative in trying to persuade electors to dump Trump.

In addition to thousands of emails, Republican elector Charlie Buckels of Louisiana said he received a FedEx package with a 50-page document that the sender said “had absolute proof that the Russians hacked the elections.”

“From the tenor of these emails, you would think these people are curled up in a corner in a fetal position with a thumb in their mouth,” Buckels said.