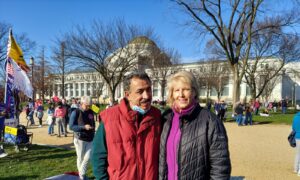 Election Protester: ‘This Is Not a Third World Country’

WASHINGTON—Robert Foster is a campaign consultant who worked with Joe Collins in California, but he was in Washington over the weekend as an individual protesting election fraud.

“I say this loudly: count each legal vote,” he said. “As an American citizen, as you are, we have an opportunity to have a free and clear election. This is not a Third World country. We’re a country that leads other countries.”

“That’s all that the people are asking for,” he said.

Foster wasn’t disappointed by the Supreme Court’s rejection of a lawsuit brought by Texas against four states for an unconstitutional election the day before. He said you don’t play all your aces at once, and this just means that God has made room for something bigger.

Foster thinks the relationships Americans are forming during this time are playing a major role in uniting America for the future.

“God has done bigger things, there was the birth of Christ, and also the birth of you and I. So if he can do those two things, we can also stick together by one for us to have success. So let’s do it together,” he said.

Foster, like many protesters, saw the battle unfolding as one between socialism and liberty.

Socialism is not just an idea, as some Democratic politicians like to say, he explained. “No, it’s not an idea. I had the privilege of living overseas for a long period of my life. There was something there called communism. And it’s also called socialism. And those two things, they’ve also birthed something called anarchy,” he said.

“Anarchy does not come to make a country better. It comes to divide the people, to conquer them by mind, and to step on their ideas, it means that you and I will not be able to do what we’re doing now. Reporters don’t have the freedom to ask free questions,” he said.

“We have an opportunity to make history, a miracle can always happen, and only takes one second for it to happen,” he said. “It takes a day for everything to be able to grow. If you plant a tree, it takes years for it to manifest itself, and the opportunity for you and I as we’re standing aside [in] this interview together. I really want us to understand one thing: it is not over, not when the fat lady sings, it’s not over until God says so.”