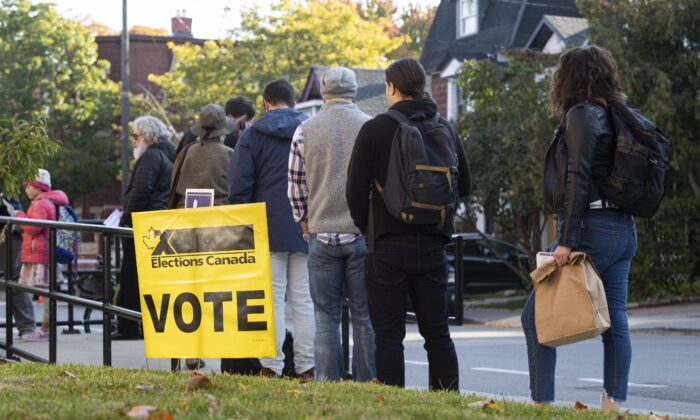 People line up to enter a polling station on election day of the 2019 federal election, in Ottawa on Oct. 21, 2019. (The Canadian Press/Justin Tang)
Canada

Election Panel: Toward the Home Stretch

With less than two weeks left in the election campaign, our panel of commentators share their thoughts on how the campaign is going for the various parties just ahead of the leaders’ debates, with the French debate taking place on Sept. 8 and the English debate on Sept. 9.

The text of the interviews has been edited for clarity and brevity.

In leaders’ debates, there usually aren’t any knockout punches, but occasionally there are. During the debate in [the 1984 election], when talking about patronage appointments to the Senate, John Turner said, “I had no option,” and Brian Mulroney said, “You had an option, sir.” That was really big.

In the [Sept. 2 TVA French-language] debate, Erin O’Toole asked Justin Trudeau about giving a raise to [former chief of defence staff Jonathan Vance, who was under investigation for sexual misconduct]. It was the same sort of thing [as Mulroney], but it didn’t resonate very strongly. Part of it could be that Trudeau didn’t let him speak—they were talking at the same time.

In the debate, you could see that O’Toole spoke good French. You could also see that Trudeau is very combative, or to put it more positively, very energized. I think that’s because he’s fighting from behind, as their polling has gone negative.

The Liberals spend a lot of time attacking O’Toole, whether it’s the health-care issue, the gun control issue, or climate change. O’Toole basically changed his position and is now on the side of banning some of the guns. But you would think it’s the Liberals who would be vulnerable, because deaths from gun violence have increased during the time they have been in power. But they still bring it out and hope that the other side won’t be as tough as they are [in their counterattack]. Will that work? It might, but if you dig down one or two levels, it shouldn’t.

The Liberals’ platform [released on Sept. 1] didn’t have anything major in it. They’re not dealing with the deficit and have no intention of dealing with it.

The economy took a downturn of 1.1 percent last quarter, and inflation is up 3.7 percent, which is the definition of stagflation. So you’d think that’s substantial and that would hurt the Liberals. But I don’t know that it is, because the press isn’t picking up on it. A lot of the press has gone full-time PMO [Prime Minister’s Office].

One of the things that people haven’t talked too much about is how a lower voter turnout could impact the election results.

On the one hand, you have a more motivated Conservative voter base, especially among the older voters, and older people tend to vote in higher proportions compared to younger people, and younger people this time seem even more turned off. So that clearly works to the Conservatives’ advantage.

On the other hand, you have a fourth wave of the COVID pandemic, and older people are going to be a little more hesitant about going to the polls. Will they take the time to ask for a mail-in ballot in advance? I did that just to see how it worked. It wasn’t really that complicated, but it did take a little bit of time.

So both these factors are not trivial issues. In swing ridings—and there are a number of them in the 905 region—these could have an impact.

I didn’t see the [Sept. 2 TVA] French-language debate change anything. Conservatives do well in Quebec City, and the Liberals do very well in Montreal, and everything else will be Bloc and up in the air.

I’m not sensing that the Liberals have the strength in this region. They don’t have the inside look, and many of the ridings are up for grabs.

I don’t think the Liberals will be pushing out of the 416, as much as the Conservatives would be pushing in from the 905 towards the 416. So the traditional patterns of voting for the past couple of elections are out the window.

But the bigger issue that has to be considered is that the public is keeping their intentions very close to their chest. I also think the public is generally angry that this election was called, and I think they’re going to punish the Liberals for having called it.

Pollsters and ‘Pulse of the Public’

I think the pollsters don’t really have a good idea. If you look at them today, they’re all showing the same results, and a lot of them have to admit that they may very well be surprised on election night. They don’t have an effective pulse of the public. My whole concern about pollsters is who’s been paying them before the election was called.

No one can know with certainty what Sept. 20 is going to look like. What I do know is that the Liberals haven’t fared any better, they’re still struggling, and it’s one of the reasons I think it’s possible that the Conservatives could eke out a very, very weak minority. Whether or not the other parties will accept that, that’s a different matter, that’s post-Sept. 20.

When the Liberals—my party—attacked [the Conservatives] in the 2006 election, to a large extent it backfired, and the negative attacks of the [current] Liberal Party could backfire as well. Mostly because the excuses have run out, they’ve had a kick at the can for six years.

Many people would say rather than attacking, maybe you need to talk more constructively, and again, give us a reason as to why, Mr. Trudeau, you called an election.

[Conservatives’ changing position on gun control] is red meat for the Liberal voters. The Liberals would use that as a wedge. I don’t think it’s going to put a dent in the intentions of people out there who are upset with Trudeau and the performance of his government.

The public’s opinion is formed more by the televised images of the leaders and the way the news media report on them and highlight various issues or statements made by the leaders rather than their platforms.

But the debates themselves, I don’t think they will make much difference, certainly not the French one.

I think where the parties stand in the polls now is more or less what we’re going to get on election day.

Earlier I was thinking that the Conservatives may get a few more seats than the Liberals; now I’m thinking the Liberals have picked up, or they’ve certainly consolidated their support.

So it all depends on the margin—for example, whether the Conservatives win by a margin of 10 or more seats—and whether the public thinks it’s fair or not for Trudeau to hang on to government.

But if it’s very close, Trudeau has the right to meet the House and to seek the confidence of the House, and we could see the deal that the NDP and the Liberals made 13 years ago, which was to have a coalition cabinet with 18 Liberals and six NDPers.

Bloc vs Liberal in Quebec

People in Quebec ask, what is the Bloc going to do for us in Quebec? All the federal parties are bending over backwards to accommodate Quebec, and so the Bloc is in trouble.

I was mistaken before. I thought that what was going to happen is that if it looked like the Conservatives were going to win, Quebecers were going to more likely vote for the Bloc, thinking that the Bloc could hold the balance of power. But now my thinking has changed, because I see that the Bloc is dropping and I think that’s primarily benefiting the Liberals.

[The reason for the shift] could be because the Liberals are running the country. If you perceive that the Liberals are going to win, it gives you an opportunity to get somebody [from your riding] at the table, who might do something for you.

Back in 1957, the Conservatives had a minority government. They hardly had any seats in Quebec. And for the 1958 election, they didn’t really campaign in Quebec but they ended up winning many more seats than the Liberals. What happened is that Quebecers saw that the country was going to go Conservative, and said, “What’s our interest? We’re a minority, let’s get some of our people at the [government’s] table.”

Now since the 1950s the culture of Quebec has changed, there’s no doubt about it. But for some people, that logic is still there.

If the Conservatives can make a breakthrough in Quebec, and certainly in Ontario, and I know that they have the momentum in B.C. as well, then they have a pretty good shot at a majority government.

This is a very critical time. The big story in the election is really two-fold at this juncture.

One is the observation that the mainstream media is working hard to cover for the Liberals’ faux pas and numerous mistakes.

The second part is that the Liberals made a lot of tactical errors, and they do that every week. I think that the Conservatives have run a fairly disciplined, managed campaign with very few errors.

The other observation is that the NDP are definitely doing better than their last election, and that is siphoning off support from the Liberal supporters. I’m surprised by how weak the Green Party is, and I think that’s probably more of a reflection of a divided organization unable to marshal support on the ground.

All elections are important, but it’s evident that this election is doubly important given the scale of the decisions at stake.

These are really generational decisions if we look at the level of spending, and the level of choices that Canada needs to make quickly in order to maintain not just the standard of living, but also the quality of life we’ve had.

When we look at the amount of spending, it’s something that will impact generations to come, and it’s somewhat disappointing that it’s not discussed or recognized in the electoral campaign.

The last two years have not been an ordinary two years. They have been one that is a confrontation around two paths that our country will take: one that is really grounded in a socialist vision for our country, versus one that has historically been a healthy mix of open market economies and government.

We have two paths that are emerging, and that isn’t just seen through spending but also the kind of legislation that is underlined as important for the Liberal Party, for example when they talk about deregulation of the internet, the so-called hate speech, and so on. These are really significant choices that we face.

Keeping the Focus on Important Issues

Any kind of violence in protests is unacceptable. As much as freedom of speech is very important, [throwing gravel is] not freedom of speech. It’s about thuggery, and that should never be welcomed in any campaign.

But things like this are not unprecedented in Canada. There are examples after examples, and I think it’s interesting that many members of the media are somehow portraying this as historically unusual.

That again illustrates the need for journalists to do their homework and be knowledgeable about history, as otherwise it’s about creating a sense of sympathy rather than the sense that we need to be talking about important issues and not be distracted by these kinds of unfortunate actions of a handful of people.