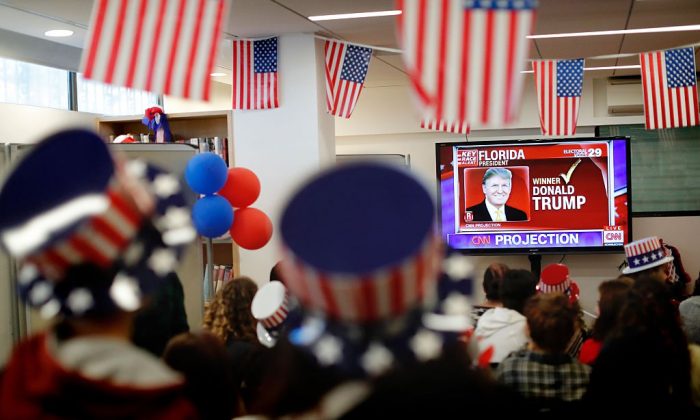 Israelis follow the US presidential elections on TV at the American Center in Jerusalem on November 9, 2016. (THOMAS COEX/AFP/Getty Images)
US

The Trump victory proved a surprise to both viewers and the networks themselves, which clearly anticipated a victory by Democrat Hillary Clinton based upon her consistent lead in pre-election polls. The aftermath is sure to lead to a serious look at the quality of opinion polls and whether journalists relied on them too much for their coverage.

Election night was a fitting conclusion to a campaign that intrigued television viewers for more than a year. Two of the three most-watched presidential debates in history were between Trump and Clinton. Trump’s proven value as a ratings-grabber led to cable networks giving what some critics regarded as an inordinate amount of attention to his appearances as his campaign was first catching on.

CNN earned bragging rights as the most-watched television network with 13.26 million viewers during the 8 to 11 p.m. prime-time hours on Tuesday. Wolf Blitzer standing with John King at the network’s video wall as King dug deep into county-by-county results in contested states was one of the most indelible images of the election night coverage.

Fox News Channel had 12.11 million viewers. NBC was the top broadcast network, with 11.15 million viewers watching as Lester Holt and his team described the victory of its former star of “The Apprentice.” ABC had 9.24 million, CBS had 8.09 million, MSNBC had 5.95 million and the Fox broadcasting network had 4.2 million, Nielsen said.

Nielsen counted viewership on 13 separate networks for its total, but did not have estimates for the commercial-free PBS and C-SPAN.

Fox News Channel’s audience soared as it became apparent that Trump had won the presidency, reaching a peak of 15.4 million viewers between midnight and 1 a.m. ET on Wednesday. Between 2 a.m. and 3 a.m. ET, when the race was officially called and Trump appeared for his acceptance speech, Fox outpaced its rivals with nearly 10 million viewers.

It was the exact opposite story four years ago, when Fox News won during the prime-time hours but its audience went to bed when Obama was declared the winner over Republican presidential nominee Mitt Romney, and CNN had more late-night viewers.