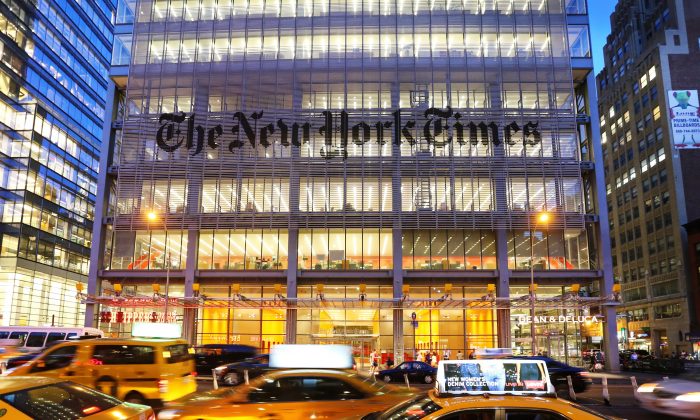 On election night, our national press corps had their heads handed to them, which, in the long run, may be a good thing.

On MSNBC on Nov. 9, the day after the election, Chris Matthews confessed to suffering a case of vertigo: “I’m still having a hard time getting myself used to standing on this Earth right now. This is a different Earth today than it was 24 hours ago.”

Similarly, on election night, MSNBC host Rachel Maddow reported Donald Trump’s victory as a disaster: “You’re awake, by the way. You’re not having a terrible, terrible dream. Also you’re not dead and you haven’t gone to hell. This is your life now, this is our election now, this is us, this is our country—it’s real.”

In their view, Trump’s win changed the world so that one was no longer at home on it, and it might be mistaken for hell.

In Matthews’s, Maddow’s, and many other journalists’ responses to Trump’s win, even a nod toward objectivity has not been an option; their reactions showed they believed there was only one rational or decent way of responding to this election.

Partly as a result of this certainty, journalists were comfortable approaching the coverage of the election as activists. This colored the news on a daily basis.

Liberal journalists typically did not report how large and excited were the crowds that came to see Trump. They didn’t conduct sympathetic or in-depth interviews with Trump supporters to find out what his appeal was. And too often, journalists hinted, based on scant evidence, that this support was based on racism or other forms of hate.

But as a result of not doing honest reporting, journalists didn’t understand what was going on. Their predictions and their understanding of what was happening were off the mark.

Perhaps anxious about the responses of subscribers, on Nov. 11, Times publisher Arthur O. Sulzberger and executive editor Dean Baquet wrote an unusual letter that in a backhanded way acknowledged the newspaper had failed. In it, they pledged “to rededicate ourselves to the fundamental mission of Times journalism.”

That mission is to report “America and the world honestly, without fear or favor, striving always to understand and reflect all political perspectives and life experiences.” But Sulzberger and Baquet never explain why a rededication is necessary.

New York Times’ public editor, Liz Spayd, was more forthcoming. She quoted a reader who wrote, “Perhaps the election result would not be such a surprise if your reporting had acknowledged what ordinary Americans care about, rather than pushing the limited agenda of your editors.”

Spayd wrote, “The Times would serve readers well with fewer brief interviews, fewer snatched slogans that inevitably render a narrow caricature of those who spoke them.” She ended her piece by asking whether her paper would be “interested in crossing the red line to see what this America wants next.”

‘Too Good to Not Be True’

Many of the anguished reflections about the election coverage have treated the media’s failures as though they are something new. But all that is new in this cycle is how spectacularly and publicly the press failed. The same ways of doing the news that produced this failure have been on view for some time.

In 2004, the New York Times ran this headline about the memos about George Bush’s National Guard service that Dan Rather reported on: “Memos on Bush Are Fake But Accurate, Typist Says.” Here we see the same partisanship we saw in the coverage of this election, with the paper pushing a favored storyline.

In 2006, a number of media outlets abandoned their objectivity in the case where a stripper accused members of the Duke University lacrosse team of raping her.

Former New York Times public editor Daniel Okrent commented: “It was male over female. It was rich over poor. It was educated over uneducated. My God, all the things that we know happen in the world coming together in one place. And you know, journalists—they start to quiver with a thrill when something like this happens.”

Asked to compare the Duke rape case to Rolling Stone’s 2014 article of an alleged gang rape at a University of Virginia fraternity, Okrent said, “It [the Duke case] was too good to not be true, and that’s what’s going on in this case as well.”

These cases demonstrate why it’s so important to get the reporting right. Because when you don’t, people get hurt—both the falsely accused, and future rape victims whose stories might be met with skepticism.

In the documentary “Fantastic Lies,” an anonymous Duke lacrosse player says, “Not a month goes by when I am not reminded of the damage those accusations have had on my reputation and the public’s perception of my character.”

In both the Duke and University of Virginia rape cases, charges were eventually dropped against the accused. But the media’s pursuit of a favored narrative left wreckage in its path.

In reporting on the faked memos in 2004, Rather’s team was led astray by what they wanted to be true: George Bush was a ne’er-do-well playboy who used his connections to avoid military service.

In the Duke and University of Virginia rape cases, reporters had stories that seemed to confirm a set of progressive narratives about modern America: a story of males as rapists, whites oppressing blacks, rich oppressing the poor, the educated manipulating the uneducated.

Narratives like these explain how society works, and, in fact, we can’t function without having some story that tells us how to make sense of things. But we are often tempted to relax into seeing the world in the way that fits the story we have in our head, rather than challenging that story with inconvenient facts.

The forces in society—such as the media, Hollywood, TV, and social media—that construct those stories in our heads are so strong that finding an independent perch from which to look at things is tough to do. A full-hearted devotion to truth is rare.

Journalists have always recognized how elusive the truth can be and have adopted strict procedures that aim at getting the facts right—not the truth, which may be out of reach or hard to interpret, but the facts, which sometimes can be nailed down. Everything depends on careful reporting.

Michael Cieply worked for 12 years at the New York Times as a reporter and editor. In an article published in Deadline Hollywood, he relates his surprise on arriving at the Times and finding things were done differently there. Stories did not begin with careful reporting.

“By and large, talented reporters scrambled to match stories with what internally was often called ‘the narrative,'” Cieply wrote. “We were occasionally asked to map a narrative for our various beats a year in advance, square the plan with editors, then generate stories that fit the pre-designated line.”

Reality intervened, with stories inevitably going in unplanned directions, but reporters were nonetheless under pressure to deliver according to the accepted script. Cieply recounts one conversation he heard, “My editor needs someone to say such-and-such, could you say that?”

Behind this narrative-driven publishing lay an arrogance, as editors imposed their prejudices on the Times’ news. Cieply was shocked to learn the depth of this arrogance.

He reports being told at least twice by Times editors about the daily page one meeting, “We set the agenda for the country in that room.”

The public embarrassment suffered by the media during this election gives the opportunity to reconsider how journalism is done.

Journalists—especially editors and publishers—owe this to themselves, but they also owe it to the nation. Our media did not just fail the country, they betrayed its trust.

While the New York Times editors may be arrogant in saying they, like so many unelected rulers, set the agenda for the country, the media as a whole has something like that power.

By informing citizens, the media shape their access to reality.

But our agenda-driven media has hardened the divisions among us and make our national conversation more difficult. The bitter divides the media regularly laments have much to do with how the media has covered our politics. Readers want better.

One reader responded to Sulzberger and Baquet’s letter by writing, “I’m devastated by the results of the election, however, I was mortified by how biased the NYT coverage of it was, even if I often agreed with their perspective.”

To answer the needs of readers, journalists need to have a searching reconsideration of their vocation and their role in society.

On the morning after the election the staff of the NPR show “On The Media” had a raw and honest conversation about what had gone off the rails for them with the presidential campaign.

Not to put too fine a point on it, but “On The Media’s” coverage of the election had been driven by the conviction that Donald Trump was evil, and his election threatened the destruction of the United States.

Show host Brooke Gladstone put her finger on the central issue. “Our main role seems to be to make what seems to be invisible to us and to everyone we know visible,” she said. “We have to talk to people that we have discounted.”

To make visible “what seems to be invisible to us and to everyone we know,” journalists need to set aside arrogance for modesty. It is a question of character.

A journalist’s devotion to truth requires putting aside favored narratives and showing tolerance for those who think differently. It requires that kindness take the place of a partisan’s desire to win.

If our media can begin adopting such a new direction, then we may look back on this bitterly contested election as a moment when our nation began learning to talk to itself again and to seek opportunities for conciliation rather than conflict.