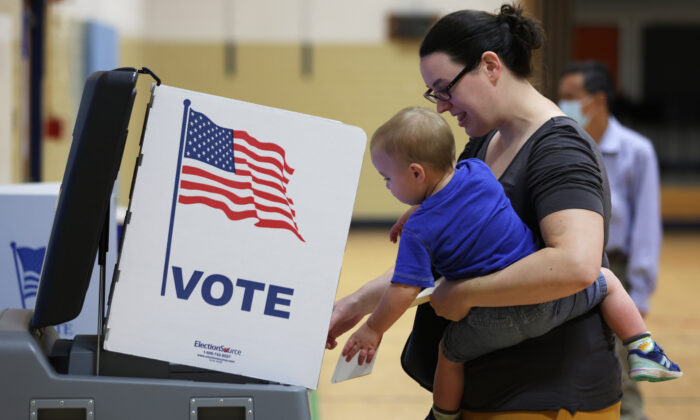 A voter casts her ballot with her child at a polling station at Rose Hill Elementary School during the midterm primary election on June 21, 2022, in Alexandria, Virginia. (Alex Wong/Getty Images)
2022 Midterm Elections

In 1994, the Democrats lost 54 U.S. House seats to the Republicans, culminating in the election of Newt Gingrich to the House speakership, along with the Republican pickup of eight U.S. Senate seats and the gain of 10 gubernatorial seats for the GOP.

“Looking at the aggregate number of people who have cast a ballot in each major party primary, we see a clear turnout advantage for the Republicans, compared to the 2018 midterm election, with Republicans up just under 48 percent in primary turnout nationally, while the Democrats are down just over 18 percent,” private pollster Jim Ellis of Ellis Insight told The Epoch Times.

The turnout numbers highlight an important “enthusiasm gap” that could again leave the public media pollsters—as opposed to private campaign pollsters—with egg on their faces in November, according to experts interviewed by The Epoch Times.

“The numbers, they seem pretty accurate from being on the ground,” said Conor Maguire, a principal and managing director at WPA Intelligence, a polling firm that specializes in electing conservatives.

In the primaries where WPA participated, they saw massive turnout by GOP voters, he said. Maguire also noted an additional indication of the trend away from Democrats in 2022.

According to Maguire, WPA, unlike many of the public media polls, does surveys that help inform candidates how to win races, and contain a lot less ideological bias than widely distributed media polling.

“It doesn’t behoove us to give our candidates a rosy picture of the situation. That’s not how we win,” Maguire said, noting that if candidates are down by 5 points, they need to know about it.

A recent analysis of 40,000 swing voters active on social media shared exclusively with The Epoch Times indicates that former President Donald Trump is struggling for support among undecided voters. Only 14 percent of those surveyed view Trump in a positive light, while 37 percent view him as negative and 49 percent view him neutrally, with a net negative rating of 23 percent, social media research firm Impact Social noted.

That compares unfavorably to Florida’s Republican Gov. Ron DeSantis, a possible challenger to Trump for the Republican presidential nomination in 2024.

However, conservatives, in general, seem to be doing well as part of a longer realignment in American politics, the campaign experts say.

“While the 2022 midterm elections may be shaping up to be a victory for Republicans, conservatives must still act as though they are behind,” cautioned Lilian Rodriguez Baz, chief legal counsel for Ready for Ron PAC, a group that’s trying to get DeSantis to run for president.

“The midterms only mark the beginning of the fight for a return to the America First agenda.”

Still, Trump has marked an important point of departure for the GOP with minorities, which should benefit the party overall, one campaign strategist said.

“I think Trump gave blacks and Hispanics and Asians a lot of reason to think about the Republican Party as a reliable alternative to Democrats, who have taken minorities for granted for years,” said Tony Marsh of Savannah Communications.

“In that regard, Youngkin ended up getting almost 17 percent of the male black vote, which was impressive. If we can do the same thing among females, and I think we can, particularly on the issues of faith and abortion and education, it will be tough for Democrats to win elections,” he said.

The turnout numbers already serve as a proxy for the enthusiasm of the voters this year, the experts said. As such, they indicate the Democrats might in trouble.

The turnout numbers shared by Ellis, the private pollster, might be skewed just a bit because they include primaries where Democrats didn’t have competitive races at the top of the ticket, but in general, they are an accurate reflection ahead of the midterms, according to Dick Morris, an author and independent pollster.

“But even excepting for that, the difference in turnout in favor of the GOP is extraordinary, something like a 4-to-1 advantage,” Morris said.

Morris said that two things are making the Democrats appear more competitive than they really are. Both are structural biases in the way polling is done.

The first bias is political.

“Sometimes, some of these polls are really built with the [ideological] end goal in mind,” said WPA’s Maguire, warning that media polls are often as much about clickbait as they are about measuring the political horseraces in elections.

The second bias, said Morris, is mathematical and fails to account for relative party voter turnout.

While the 2016 election is the most egregious example of getting turnout wrong, with pollsters claiming even on Election Day that then-Democratic presidential nominee Hillary Clinton had a 90 percent chance of beating Trump for the presidency, the 2020 election polls weren’t much better.

With less than a month to go before the 2020 election, an ABC News/Washington Post poll said that Joe Biden enjoyed a 12-percentage-point lead over Trump in an election that was ultimately decided officially by 4 points.

The premium is on getting people to participate, and not on the quality of data, Morris said about most media polls these days.

Pollsters are doing most polls online, which brings in a lot of tech-oriented people who have a bias to vote Democratic, Morris said.

“Also pollsters are providing financial incentives, which gives people rewards like the 1,000th person to participate wins a free trip to Hawaii,” he added.

“So some of these polls have the same people participating over and over.”

Ellis said that there are key states to watch in the midterms based on turnout data.

“Alaska, where we will see a rerun of the congressional race that drove primary turnout for both sides; Arizona, where each major party saw significant increases from 2018 (Republicans: 26.9 percent; Democrats: 17.9 percent); Georgia, where Republicans were up almost 110 percent while the Democratic increase was 29 percent; Kansas (Democrats up 76.8 percent, Republicans: 42.2 percent); Oregon (both parties up: Democrats: 25.6 percent; Republicans: 19.9 percent); and Pennsylvania, where the GOP turnout factor was up 92 percent and Democrats’ 58 percent higher in comparison to their 2018 performance.”

Nevada should be worrisome for Democrats, Ellis said, with the Republican turnout up 26 percent and Democratic turnout down 20 percent over 2018.

Data shared with The Epoch Times by Morris from pollster John Jordan also highlighted some states where U.S. Senate races may be more competitive than some people think.

In Colorado, only 44.1 percent of likely voters said that they think incumbent Democratic Sen. Michael Bennet deserves to be reelected, with just 33.8 percent saying they’d definitely vote for Bennet on Election Day. Of the sample, only 40 percent approve of the job being done by President Biden, after 55 percent of the Rocky Mountain state voted for Biden in the 2020 presidential general election.

Bennet is being opposed by Republican newcomer Joe O’Dea.

Colorado, in particular, demonstrates why it’s dangerous to read too much into the top-line results right now.

A recent poll by Public Policy Polling, one of the higher-rated Democratic media polls, showed Bennet up 46 percent to O’Dea’s 35 percent, the Denver Post reported on Sept. 10 before it highlighted the problems with the data.

“But, notably, [the poll] doesn’t filter by likely voters and 11% of respondents said they either didn’t vote or voted third-party in the 2020 presidential election. The 2020 general election set a record for voter turnout, with nearly 87% of active voters casting ballots. Only about 2.5% of votes for president were for third-party candidates.”

Instead, the newspaper recommended a poll cited by the Washington Examiner that surveyed just likely voters and found the campaign to be a dead heat.

In Connecticut, the story also isn’t boding well for the Democrats.

Of likely voters surveyed in the Nutmeg State in a poll by John Jordan in late July, 41.4 percent think that Democratic Sen. Richard Blumenthal should be returned to the Senate, with 47.2 percent saying it’s time to pick someone new. Only 43.4 percent of likely voters polled in the state approve of the president’s job performance after Biden got 59 percent of Connecticut’s presidential vote in the 2020 general election campaign.

Blumenthal is being challenged by the GOP’s Leora Levy, a Cuban American businesswoman.

While the outlook for Biden in both Colorado and Connecticut may look less than ideal, the voters surveyed in the Jordan polls still prefer Biden over Trump, which explains why the Democrats are putting added emphasis on Trump on the campaign trail, according to Marsh.

“I think Trump missed some opportunities as president to take credit for things that he legitimately deserved credit for, because he let his personality get in the way,” Marsh said, adding that Trump sometimes falls into traps that his enemies set for him.

And the Democrats and their media allies then are only too happy to continue to represent polls that make it appear as if the things the Democrats do on the election trail actually work, Maguire said.

“So much of it today is to get clicks, is to get people to read a story or to engage something to make a statement or to draw positive attention,” to the Democrats, Maguire said of public polling, even though the polls may not be an accurate depiction of what is really going on.

There is one last distinction between polls and primaries that ought to worry Democrats who are anxious about the midterms, Ellis says.

“While polling is an important informational tool based upon sampling, probability, and current factors, the primary turnout figures represent actual votes,” he said.

And, thus far, the actual votes are favoring the GOP.

Officials at the Democratic National Committee didn’t respond by press time to a request by The Epoch Times for comment.