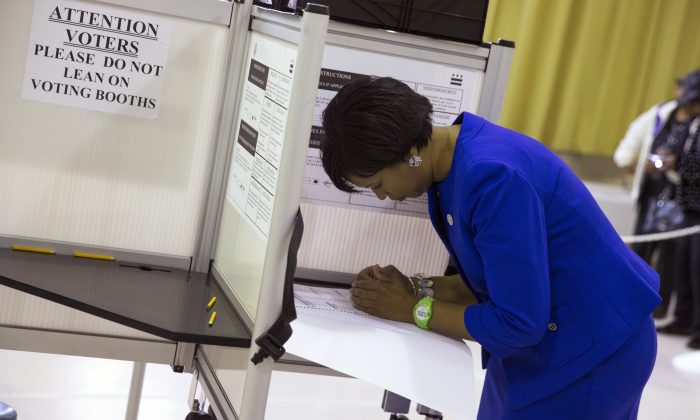 Election Day 2014 is here on Tuesday and people participating in the process can draw from a number of quotes and sayings from years past.

Check out a collection below.

2. “The vote is the most powerful instrument ever devised by man for breaking down injustice and destroying the terrible walls which imprison men because they are different from other men.” — Lyndon B. Johnson

3. “The ballot is stronger than the bullet.” — Abraham Lincoln

4. “Votes are like trees, if you are trying to build a forest. If you have more trees than you have forests, then at that point the pollsters will probably say you will win.” — Dan Quayle

5. “It’s heartbreaking that so many hundreds of millions of people around the world are desperate for the right to vote, but here in America people stay home on election day.” — Moby

6. “Each party steals so many articles of faith from the other, and the candidates spend so much time making each other’s speeches, that by the time election day is past there is nothing much to do save turn the sitting rascals out and let a new gang in.”

7. “The political process does not end on Election Day. Young people need to stay involved in the process by continuing to pay attention to the conversation and holding their leaders accountable for the decisions they make.” — Patrick Murphy

MORE: Where Do I Vote On Election Day 2014? How to Find Polling Places

8. “Election Day outside of big cities is different. For one thing, there are so few people in my town that each individual vote really does matter, and several local races have been decided by as many votes as you can count on one hand.” — Susan Orlean

9. “We have a system that allows us to manage a free and fair election, free of fraud, free of intimidation, and that’s what we delivered on election day, and we’re very very proud of it.” — Kenneth Blackwell

10. “Politicians are like diapers. They both need changing regularly and for the same reason.” — Unknown

11. “A citizen of America will cross the ocean to fight for democracy, but won’t cross the street to vote in a national election.” — Bill Vaughan

14. “We have plenty of Confidence in this country, but we are a little short of good men to place our Confidence in.” — Will Rogers

15. “Every four years in the presidential election, some new precedent is broken.” — Nate Silver