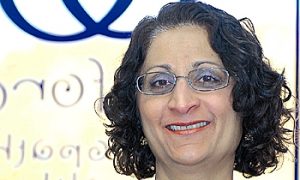 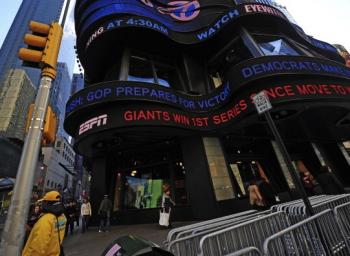 ELECTION DAY: A ticker on Times Square announces the Democratic party's last minute push and the forcast for the Republican Party's victory in the US mid-term elections in New York, November 2, 2010. (Emmanuel Dunand/AFP/Getty Images)
Opinion

Election Day: I Love It!

Evan Mantyk
biggersmaller
Print
NEW YORK–Election day opened to a crisp autumn morning, when I left for work 30 minutes early in hopes of quickly getting to my designated voting location and making it to the train. Tuesday was my first time voting in 10 years.

My reasons for not voting varied. I showed up to the poll five minutes too late, I forgot to register in a neighborhood I had relocated to, and on the mid-term elections I think I was just too busy and turned off by partisan politics to care.

As embarrassed as I am about not voting for such long stretch, I know I am not alone, not by a long shot. In the 2008 presidential election, in what was supposed to be a year of amazing voter turnout — and actually was a year of amazing voter turnout compared to past years — only 61.6 percent of my eligible countrymen turned out to the ballots, according to statistics compiled by Dr. Michael McDonald of George Mason University.

That means about 40 percent of eligible voters couldn’t be bothered fulfilling a civic duty that the earliest Americans fought and died for, and that Americans today fight and die to give to others. Could you call it sad? I don’t know, all I know is that I voted on Tuesday and I loved it.

When I arrived at the voting place, I was surprised to find no line. The whole process took approximately five minutes, allowing me to get to work early.

Suddenly, I was a member of my community. A community that I have only lived in for about a year, but one where I am raising my young children.

The state senate candidate who had diligently campaigned door-to-door, including to my relatively insignificant door, suddenly was rewarded with a vote. When the local judge candidate came up to me at the train station on Tuesday and meekly asked if I would mind taking his literature, I proclaimed: “No need, I voted for you already!”

As the day wore on I began to feel like Captain America, wearing a skin-tight red, white, and blue feeling and wielding a powerful shield with a beaming star that could vaporize any enemy of freedom within 10,000 miles.

Then it hit me. The scourge of modern America is not partisan politics after all. Nothing of the sort. What this country needs is more partisan politics, more polarization to the extent that a whole spectrum of political parties and fresh ideas permeate to the surface of our society.

In New York, we had governor candidates in five parties, in addition to the standard two, including the Freedom Party, the Anti-Prohibition Party, the Green Party, the Libertarian Party, and the Rent Is Too High Party.

This is great. But it’s just the beginning. The five minor parties didn’t stand a chance based on what the polls and every pundit said. But what if a few brilliant individuals had put together the main messages of three of the parties, formed a coalition, and then started going door-to-door. Then, in four years, you might just have something and in eight years you might just be Governor.

The more Americans who can get involved in politics and push their informed and passionate issues and opinions to the forefront of American society the better. The Republicans and Democrats only exist because we let them and they are only uninspiring if we don’t give them anything to work with. This is what America is all about.