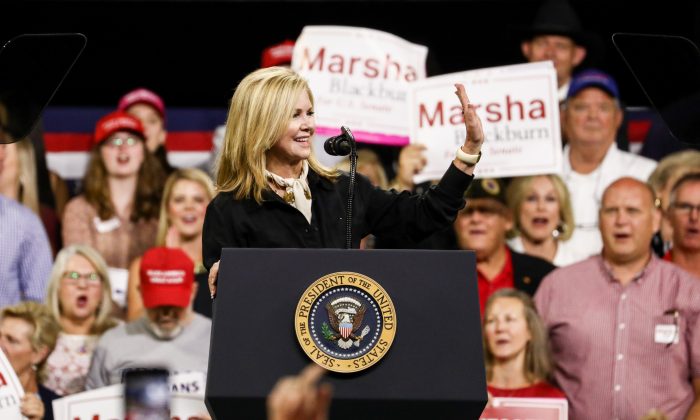 President Donald Trump has solidified his position in the Republican Party as the midterm elections filled the ranks with supporters of his agenda.

Not only have the Republicans strengthened their hold on the Senate, but within that majority, several so-called “never-Trump” Republicans disappeared.

In Arizona, anti-Trump Jeff Flake also didn’t seek reelection and will be replaced either by pro-Trump Martha McSally or Democrat Kyrsten Sinema. McSally was slightly ahead on Nov. 7 afternoon with some 75 percent of the ballot counted.

Sinema is a closet progressive, according to some of her staffers, and unlikely to lend Trump her vote. But either way, the concentration of Trump supporters in the Senate GOP has increased.

“I retired him. I’m very proud of it. I did the country a great service,” he said during a Nov. 7 press conference. “He is retired. I’d like to call it another word but we’re going to treat him with great respect.”

Mitt Romney, who won the Senate race in Utah, spoke strongly against Trump in 2016 but has since toned down the rhetoric and expressed somewhat measured support for several key points of Trump’s agenda.

In the House, Speaker Paul Ryan, who split with Trump on immigration policy, didn’t seek reelection and his Wisconsin seat will be taken by Trump endorsee Bryan Steil.

Democrats took over some of those seats. Nonetheless, a number of those criticizing or distancing themselves from Trump are leaving, including Rep. Ileana Ros-Lehtinen (R-Fla.).

On the other hand, of the 11 candidates Trump campaigned with over the last week, nine won.

“Those that worked with me in this incredible Midterm Election, embracing certain policies and principles, did very well. Those that did not, say goodbye!” Trump said in a Nov. 7 tweet.

The president campaigned on behalf of the candidates, pulling off 26 rallies since Oct. 1, and nine in the last four days before the election.

He said he focused on the Senate races, as touring the individual districts for House races would require too much travel.

While losing the House represents a partial loss of power for Republicans, it also removes part of the responsibility Democrats have placed on Trump for delays in passing legislation. He can now wait for the Democrats to come to him for votes on legislative proposals.

“The Democrats will come to us with a plan for infrastructure, a plan for health care, a plan for whatever they are looking at [and] we’ll negotiate,” he said at the press conference.

A stronger supporter base in the Senate, on the other hand, suggests the chamber will provide him smoother confirmations of judicial and other appointments.