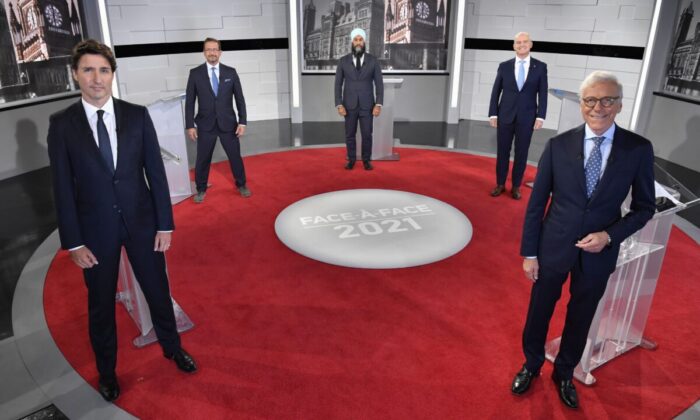 On day 20 of the federal election campaign, party leaders committed to a range of issues including mandated vaccination for travellers, tougher laws on illegal firearms, and a platform for Quebec.

But the highlight of the week was the Sept. 2 two-hour French-language debate aired on the Quebec network TVA, which did not include the leaders of the Green Party and the People’s Party.

During the debate, Liberal Leader Justin Trudeau was grilled by other party leaders about his rationale for calling an election in the midst of a pandemic. Conservative Leader Erin O’Toole pressed Trudeau for answers.

“We’re in the middle of making decisions right now. Not in three months, not in a year,” Trudeau responded while noting that his minority government was elected in 2019 prior to the pandemic that upended federal priorities. “We must give Canadians the choice.”

When asked if mandatory vaccination is considered necessary for all adults to end the COVID-19 pandemic, Trudeau responded, “We won’t force anyone, but we will limit the privileges of those who don’t want to be vaccinated without a good medical reason.”

Bloc Québécois Leader Yves-Francois Blanchet stated that gaining a majority in Parliament was the Liberal leader’s main motivation. Trudeau also faced accusations from Blanchet that the federal government is interfering in provincial matters by trying to impose national standards for long-term care homes that would result in more civil servants, not more nurses.

Trudeau said he wants to work in partnership with the provinces and respects their jurisdiction over health care.

On Bill 21, Quebec’s secularism law that bans government workers from wearing religious symbols such as crosses, hijabs, turbans, and yarmulkes, Trudeau said he is strongly against it and doesn’t rule out the possibility of contesting the law in court.

Trudeau also noted that there may be another election in 18 months if Canadians don’t elect a majority on Sept. 20, but at a press conference afterward he said he meant that the Liberals have surpassed the average 18 month lifespan of a minority government.

During the debate, O’Toole was repeatedly challenged on his views on mandatory vaccination. He didn’t answer directly, but when Blanchet asked his three opponents if all of their candidates were vaccinated, O’Toole said the Conservative Party uses daily screening tests.

When debate host Pierre Bruneau asked if employees who refused vaccination should be dismissed, O’Toole responded by saying “a reasonable accommodation” must be found.

O’Toole was put on the defensive when asked whether the $6 billion childcare deal the Liberal government promised Quebec shortly before the election was called would stay in place under a Conservative government. The Conservatives proposed to replace the deal with a refundable tax credit of up to $6,000, and he explained he would “co-ordinate” with Quebec’s Premier François Legault.

In the back-and-forth with Trudeau on health care, O’Toole reiterated that he would boost federal health transfers to Quebec with no-strings-attached funding of $60 billion over 10 years while criticizing Trudeau’s approach to long-term care as “paternalism.”

The Conservative leader also pledged to convene the country’s premiers in his first 100 days as prime minister to address health-care gaps exposed by the pandemic.

NDP Leader Jagmeet Singh pledged to remove for-profit long-term care homes by saying that he would not stand idle when “profits have effectively killed our elders.”

The debate also reignited Singh’s year-old dispute with Blanchet, when he called Bloc MP Alain Therrien a racist in June 2020. Singh was removed from Parliament for “unparliamentary” language after Therrien blocked an NDP motion to recognize systemic racism in the RCMP.

Blanchet pressed Singh to apologize but he refused, saying that Therrien had made a dismissive gesture to him.

On the Campaign Trail

At Pearson Airport on Sept.3, Trudeau announced his party’s commitment to end the fight against COVID-19 by reiterating that anyone age 12 or over be fully vaccinated before they can board interprovincial trains, commercial flights, cruise ships, or other federally regulated vessels, which is part of the Liberals’ election platform.

On Sept. 3, O’Toole announced in Montreal that his party would combat gun violence by bringing in tougher laws to keep firearms out of the hands of criminals, gangs, and gun smugglers by cracking down on the “straw purchasing” of firearms.

Specifically, the Firearms Act would be amended to make individuals who transfer a firearm for financial purposes on three separate occasions during the same year require a firearms business licence. O’Toole’s plan would also see an amendment of the Criminal Code to increase sentencing based on the number and cost of transferred firearms. He also pledged to support the RCMP and CBSA to work closely with the United States to prevent illegal firearms from coming across the border.

At a campaign stop in Quebec City on Sept. 3, Singh unveiled his party’s platform for Quebecers that includes a commitment to protect the French language, introduces a 1-percent wealth tax on assets over $10 million, and institutes a temporary pandemic 15-percent corporate excess profit tax. Singh promised an NDP government would build at least 110,000 social and affordable homes in Quebec over the next decade and make the province’s public transit fully electric by 2030.

In a press conference in Toronto on Sept. 3, Green Party Leader Annamie Paul called for the creation of a national database to record data on police use of force against racial minorities.

Paul also posted a tweet earlier in the day explaining why she wasn’t at the Sept. 2 leader’s debate. “People have been reaching out to me today to ask me why I wasn’t at last night’s TVA debate. I want to be clear, I wasn’t invited to participate,” she wrote.

In a series of  Twitter posts, Bernier expressed his gratitude to media that cover his party in a “non-biased and professional manner.”

“Thank you for respecting your readers and viewers, and for trying to inform them instead of manipulating them. Thank you for holding on to ethical and professional standards. Thank you for playing an essential role in our democracy,” he wrote.