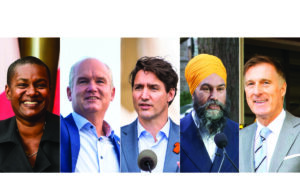 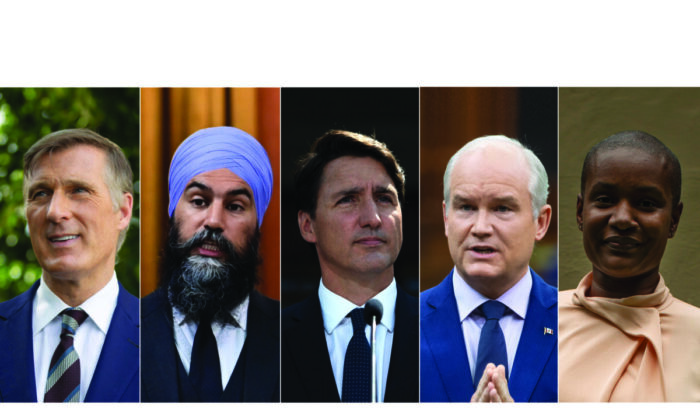 Protecting freshwater, animal welfare, and going after tax evasion were some of the topics that leaders made announcements about on Day 16 of the federal election campaign.

In Quebec on Aug. 30, Liberal Leader Justin Trudeau announced that his party will invest $1 billion over a 10-year period to protect and restore Canada’s lakes and rivers. The plan also includes investing $37.5 million over six years in freshwater research at the International Institute for Sustainable Development’s Experimental Lakes Area.

While campaigning in Cambridge, Ont., on Aug. 29, Trudeau said if re-elected, the Liberals will create new jobs for the middle class by making Canada a leading manufacturer of batteries needed for zero emission vehicles. A proposed $2 billion investment in a Futures Fund for Alberta, Saskatchewan, and Newfoundland and Labrador would see “Clean Jobs Training Centres” created to upgrade workers’ skills for the clean energy sector. A $5,000 rebate extended to half a million Canadians aims to make zero emission vehicles more affordable, with a promise to build 50,000 more charging stations across the country.

Trudeau also pledged to diminish plastic pollution by requiring all plastic packaging to be composed of 50 percent recycled plastic by 2030 and to expand programs to remove plastic from oceans and coastal areas. In a press release on Aug. 28, he said the Liberal policy to cut plastic waste has the potential to create up to 42,000 jobs across Canada.

Conservative Leader Erin O’Toole announced on Aug. 30 that his party is committed to protecting animals and will ban puppy mills to stop unethical breeders and dealers from misleading the public with false claims of offering rescue animals or humanely bred pets. In addition, the Conservatives will ban cosmetic testing on animals. Animal cruelty will also be added as an aggravating factor in domestic violence prosecutions.

While campaigning in Quebec on Aug. 29, O’Toole promised to help small businesses by offering a “Rebuild Main Street Tax Credit” providing a 25 percent tax credit to Canadians who invest up to $100,000 in a small business over the next two years. An elected Conservative government will also introduce a “Rebuild Main Street Business Loan” offering interest-free loans of up to $200,000 to small- and medium-sized businesses.

In New Brunswick on Aug. 28, O’Toole committed to raising the maximum penalty for price-fixing from $24 million to $100 million in order to lower food prices. The Conservatives will also introduce criminal penalties for executives convicted of price-fixing and will enact a code to protect suppliers and promote price competition.

At a press conference on Parliament Hill on Aug. 30, NDP Leader Jagmeet Singh pledged to take action against tax evasion by the ultra rich through a $100 million investment that will strengthen the enforcement ability of the Canada Revenue Agency. The NDP’s plan also includes increasing public reporting on corporate taxes and tackling unfair stock options.

Singh also promised to make student debt more affordable. In an Aug. 28 press release, he said the NDP will forgive up to $20,000 and remove federal interest from student loan debt, double federal student grants, and give new graduates a five-year remission for federal loan repayments.

Green Party Leader Annamie Paul said in a press release on Aug. 29 that her party fully supports the Quebec government’s efforts to protect the French language within the province. In an Aug. 28 posting on it website, the party also raised concerns about Elections Canada’s cancellation of campus voting programs for students.

During his campaign stop in Saint Stephen, New Brunswick, on Aug. 28, People’s Party Leader Maxime Bernier pledged to defund and privatize CBC/Radio-Canada if he is elected. He also promised to abolish the federal government’s media bailout program to prevent media organizations from becoming dependent on the funding and having it influence the way news is reported.