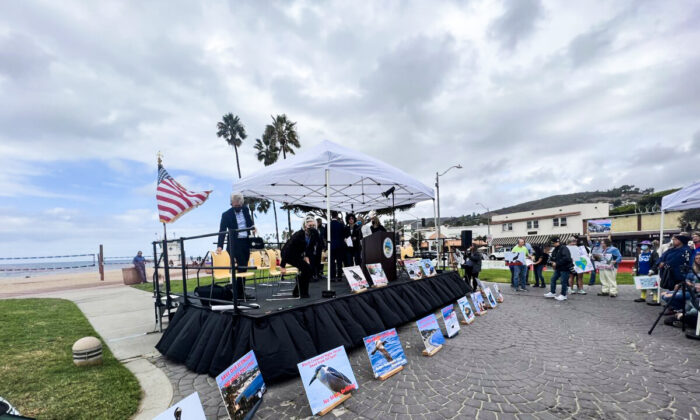 After the oil spill off the coast of Huntington Beach in early October, which released thousands of gallons of oil into the ocean due to a broken pipeline, the overall message at the event was, “No Drilling, No Spilling.”

“Here in Laguna Beach, we have taken for granted our pristine coast, but sadly, our bubble has burst by this horrific and inevitable oil spill,” Judie Mancuso, president of Social Compassion in Legislation, said. “There is so much at stake already for our threatened marine and wildlife.”

“[We have] 1,230 miles of beautiful splendor of coastline in California, some of the most spectacular in the world. But unfortunately, every day this irreplaceable ocean environment, this natural beauty is threatened by the possibility of another oil spill off our coast,” Mayor Whelan said.

“Just over two weeks ago, Orange County was hit by the latest spill,” he said. “The easy path would be to complete the cleanup and move on. We could rationalize this path by saying that the latest spill wasn’t as bad as we feared, or that spills don’t happen that often, or eventually these leases will come to an end. But the easy path is not the right path, this time.”

Min claim that banning off-shore drilling is the only way to fix the problem of oil spills.

He also said he is committed to finding out who is responsible for the oil spill and holding them accountable.

“But holding responsible parties accountable is not enough,” Min said. “We need to make sure that our beautiful coastlines are never terrorized in another oil spill. And there’s only one way to do that—by ending all oil drilling off the coast of California.”

Min said that his bill, which starts its process when the legislature commences in January, will do justice for the state’s water by completely banning oil drilling—not just banning new leases on oil drilling which he said had been proposed to him a number of times.

“I just want to point out that [a moratorium on new drilling] is not enough,” he added. “A lot of people don’t know the facts around this, but we’ve actually not had a new lease granted for oil drilling or extraction off the coast in federal waters since 1982 and in state waters since 1969. So a moratorium on new drilling sounds great, but it wouldn’t have actually stopped this oil spill or any of the oil spills we’ve experienced in the last 40 years.”

“A moratorium on future drilling is necessary but not sufficient to stop future oil spills.”

Fonda, an environmental activist, also took to the stage where her speech was soon interrupted by protestors with a loudspeaker, who called her a “traitor to the country.”

Prior to the protesting starting, Fonda said she supports Min’s legislation, but wants President Biden to do the same with federally-controlled waters, and warned about other ecological issues.

In addition to the press conference, federal lawmakers held a hearing today that sought to better determine the impact of the oil spill and create an investigation into how it occurred.

During the investigation, Rep. Katie Porter (D-Irvine) pledged a “full and fair and complete investigation of the circumstances of this leak,” but said she wanted to ensure the regulatory and law enforcement agencies complete their investigations before “talking about accountability.”