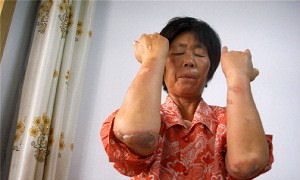 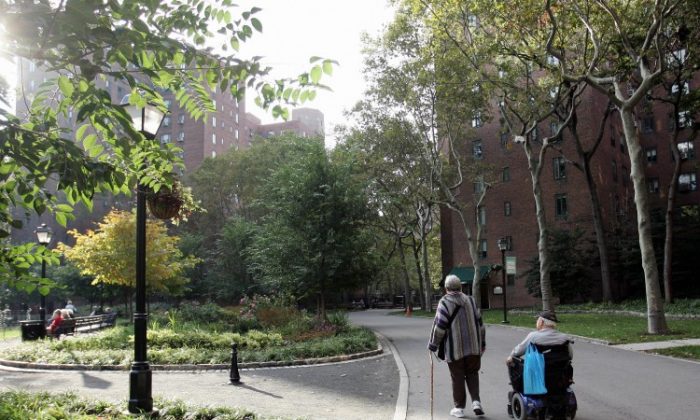 An elderly couple walk in a park in Stuyvesant Town, New York in this file photo. Elderly people are vulnerable to being taken advantage of financially, especially by their own family members. (Don Emmert/AFP/Getty Images)
US

NEW YORK—Help from others for essential daily tasks, such as grocery shopping or paying bills, is required for many elderly people who can no longer do things on their own. When caregivers—frequently family members—take advantage of the elderly’s trust, it becomes elder abuse, and it can cause victims to feel confusion, melancholy, and self-doubt.

“I’m too smart for that, I wouldn’t let that happen to me.” That’s what many elderly persons think, says Ken Onaitis, licensed master social worker and director of elder abuse and police relations at Carter Burden Center for the Aging.

Cases of elder abuse, especially because they often involve different generations of family members living together, are difficult to resolve.

“The person who is taking advantage of them may be living with them,” says Onaitis. “We quite often have family members who are taking the money—they’re there, they need a place to live. At the same they’re providing help to the older adult, so it’s not a clear-cut criminal justice issue, where you arrest a person and everything goes away.”

In fact, the number of elder abuse cases differ greatly from cases reported, according to a 2011 statewide study titled “Under the Radar: New York State Elder Abuse Prevalence Study,” conducted by a group including researchers from the Weill Cornell Medical Center.
Researchers interviewed 4,156 older New Yorkers (adults aged 60 or older) or their proxies, and collaborated with 292 agencies to complete the study. It concluded that elder abuse incidents are nearly 24 times higher than reported.

Applying this methodology, an estimated 260,000 older adults are victims of elder abuse each year. Americans aged 65 or older total 2.6 million, according to the U.S. census.

The highest form of abuse was financial exploitation, including property theft, impersonation to access money, and using credit cards and the like without permission.

Those that are handed power of attorney, for instance, are given much authority.

Onaitis advises older people to consider the decision carefully. “Do you trust that you’re giving them the power to control your life? Have you explained what you want, and do you feel that they can be trusted to do that? Know who you trust, think about who you trust, and trust your gut. If it seems too good to be true, it probably is.”

According to the study, 76 elderly persons out of 1,000 were abused. Financial abuse accounted for over half of the cases.

Female Caucasians between 65 and 74 were victims of elder abuse the most. Males between 18 and 45 who were adult children of victims were the largest group of perpetrators.

About three-quarters of the calls that Onaitis and his center get are not from victims—they come from family members, social workers, and police.

“The first challenge is to get the victim to say ‘Hey I need help,'” says Onaitis.

And victims are not usually willing to speak about their experiences.

“There’s so much shame and guilt around the subject that just getting a victim to come forward is hard enough,” says Onaitis. “Once it’s over, many times people just want to put it behind them.”

The reasons for abuse range from the present state of the economy to the ease of pilfering social security payments or food stamps, particularly from a family member, according to Bobbie Sackman, director of public policy for the Council of Senior Centers and Services of New York City.

Detecting abuse is difficult, and made harder by funding cuts by the city, says Sackman. City Council discretionary funds have paid for nine elder abuse contracts citywide for the last four years, often leaving thinly spread staff for each borough.

Noticing when changes happen in the elderly, such as physical marks like burns or bruises on their bodies, or mood changes and withdrawal from their usual activities, should prompt examination, she said.

“Sometimes it’s worth investigating, it could be something big,” she says.

The Manhattan district attorney on April 30 charged a man for deceiving an elderly woman for 40 years, taking more than $1.6 million from her. The FBI on Wednesday charged two persons for “swindling an elderly woman out of her multimillion-dollar property in Harlem,” and getting a bank to give them a $1.8 million mortgage loan.

“If you suspect elder abuse, call a specialist,” says Onaitis. People can also contact 311, the police, and entities such as Adult Protective Services or the District Attorney’s Office.