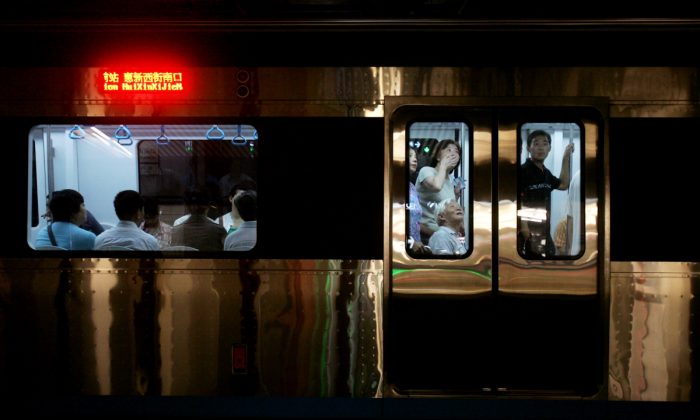 A quarrel broke out when a young woman refused to give her seat on the subway to an elderly man, according to Chinese online media outlet The Beijing News.

No one was injured in the Aug. 20 confrontation, the outlet reported.

Signage on China’s public transportation recommends that able-bodied people should offer their seat to the elderly, pregnant, ill, or disabled individuals.

The argument recorded by witnesses in Changsha City, Hunan Province, was one instance when those recommendations were ignored, according to the Aug 21 report.

Video footage taken by witnesses on the subway showed the man in brown clothing standing over the woman, who was wearing a light pink dress. The two then started arguing as the man demanded that the young woman give up her seat.

“Is your name written on this spot?” the woman asked the man.

“My name isn’t written [there], I just want to sit down!” the man responds.

Then, he sits down between the woman and another passenger, shoving the woman off the seat in the process.

He then brandished an umbrella at her.

“I’ll kill you,” he said, according to The Beijing News.

A woman in a black and white striped dress then came to the other woman’s aid. It is unclear if the two women know each other.

The three argue about whether the man was right in his actions.

“It’s voluntary,” the woman in black and white said as she pulled the other woman away.

The argument continued, with the man standing up to threaten the women, but no fight broke out.

Later the two women are seen sitting together on the other end of the subway bench, as the woman who was pushed off the seat made a phone call, wiping away tears. The call was to the police.

The man got off at the next station and was not found.

Police did not report if any action will be taken against the man.