To Help or Not to Help, a Dilemma in China
0
Share Now
TelegramFacebookTweetEmailTellMeWeReddit
Copy Link 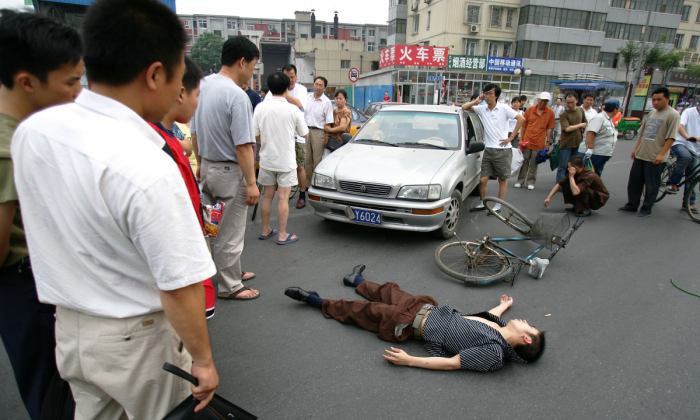 An elderly man flung himself on a car in an attempt to create a fake traffic accident to exploit money from the driver. The incident was caught on a closed-circuit camera, which were able to prove that the elderly man’s actions were feigned.

In China, a traffic accident is almost always ruled in an absolute manner and whoever is smaller in the collision is considered the victim, no matter who is at fault.

People in China have grown to despise this kind of behavior, locally referred to as “breaking porcelain,” revived from an old saying to refer to when people would intentionally create fake damages or injury as a means of financial exploitation. When it first started to appear, neither the government nor the police made much effort to crack down on the exploitative behavior.

To avoid legal proceedings, police often facilitate an exchange of money to the victim, whether or not they are truly a victim.

According to video footage from Search-Fox Qianliyan, an elderly man was seen running forward towards a car parked outside a convenience store on Feb. 20 in Dalian province, China.

He then flings himself, arms-first, onto the hood of the car and rolls onto the sidewalk, as if he’s been hit. At the time, the woman inside the car had neem parked in front of the convenience store to take a phone call.

According to the video, the elderly man ran for several tens of meters toward the car before he fell on the hood.

The woman got out of the car and tried to talk the man out of his act as he lay on the sidewalk but the man refused to leave.

In China, when a traffic accident occurs, the individuals involved often not move from their resting place to signify that they are hurt and deserve compensation.

However, when the woman said told the man that she was calling the police, he calmly got up and walked away.

The term breaking porcelain came from the Qing Dynasty. People would take cheap porcelain vessels, and smash them against someone’s cart, claiming that the driver broke their expensive heirloom. They would demand compensation.

In recent times, reports of this behavior of feigning injury started in 2004. Gangs have established themselves and to exploit certain legal loopholes, with a huge number of exploitation cases going unrestrained by the Chinese regime which allows individuals to exploit certain loopholes.

As a result, many people in China opt to not get involved if they see injured people, as there is always an additional risk that those who assist also get blamed.

Many instances of exploitation have come about from people feigning injury. But in a society where bystanders fear exploitation, many Chinese people have also died when they were ignored when truly being in need of help from their fellow citizens.

To protect themselves, many Chinese drivers have installed dash-cameras in their cars to catch such falsified incidents.

In the above video, people can be similarly seen hurling themselves onto cars that are already stopped. Some even go as far to crawl under a stopped vehicle and act as if they’ve been run over.

A man is also seen sitting in the middle of the road with his clothing strewn about. Similar to a toll station, he approaches vehicles to place his foot under the car. He then won’t move unless the driver pays.

China has also seen people actively injure themselves for money.

Since there is a bigger payment when an injured person survives a car crash, some Chinese drivers have instead opted to murder the people that they’ve hit with their cars.

This phenomenon in China is known as “hit-to-kill.”

When someone is hit and knocked down, some drivers have been known to run them over again, and not just once in some cases.

As above, many bystanders in such situations still refuse their help to the injured individuals, even after seeing how they’ve been run over.