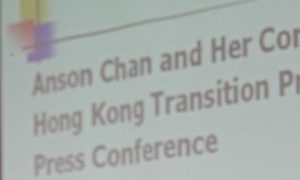 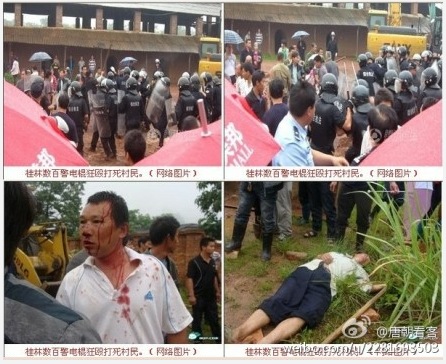 Screenshot of Weibo regarding a man killed by armed police in Guangxi. (Credit to Weibo)
China

A 61-year-old man, Mr. Ge Jianxing, was beaten to death by police in Guilin, China, on June 1, after officials in Chaoyang Township set out to forcibly demolish three brick factories owned by Mr. Ge Jianxing and his village. Several others were injured, and four to five suffered severe injuries.

According to local villagers, the police were using electric batons to beat them. Local officials sent close to 300 police, urban administration cadres, and unidentified personnel to carry out the forced demolition.

Local villager Mr. Ge said, “The police beat villagers with batons. They frenziedly kicked and punched us causing Ge Jianxing such serious injuries that he died in the emergency room, and four to five other villagers were severely injured. One of them whose nose bone was broken remains hospitalized.”

Mr. Ge Jianxing was beaten to the ground and later rushed to the hospital. He died at 5:00 p.m. that day.

That evening, villagers and the victim’s family carried his corpse to Guilin City Hall to protest. Mr. Ge said, “Three policemen grabbed each villager. More than 20 villagers were taken away and locked up, and the corpse was kept by the police.” Local authorities blocked information about the incident and warned the victim’s family to not talk to outsiders.

Local villager Mr. Ge added, “Local authorities claim that Ge Jianxing died of ‘drinking.’ That’s completely absurd. We have no place to redress our grievances and now his body has been cremated and the funeral will be held a few days later.”

Villagers said that local authorities have been in collusion with businessmen in forcibly reselling their land for huge profits.