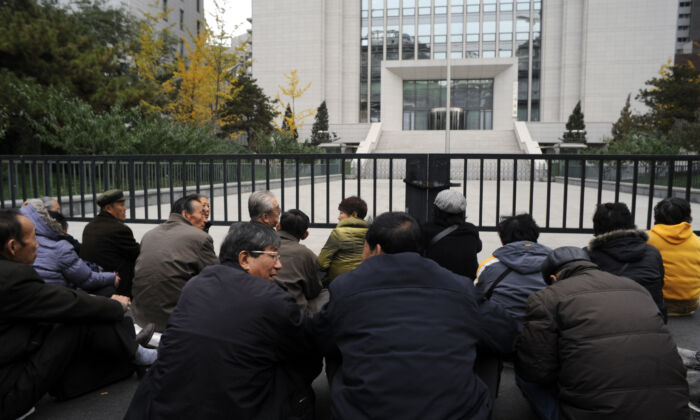 A group of elderly retirees from the Prison department in northeast China's Liaoning province, stage a sit-down protest outside the Chinese Ministry of Justice over their unpaid pensions in Beijing, China on Nov. 8, 2011. (Goh Chai Hin/AFP via Getty Images)
China Human Rights

Elderly Deprived of Pensions to ‘Dead-End’ Those Who Uphold Belief

Many retirees in communist China have had their pensions suspended for upholding their faith in Falun Gong, a spiritual practice based on the principles of truthfulness, compassion, and tolerance. The CCP has no legal basis to deprive any citizen of their pensions, aiming to eradicate the group, a former lawyer commented.

In 2020, at least 161 practitioners were forced to pay back the pension they received during their time imprisoned for their belief, based on incomplete data collected by Minghui.org, a U.S.-based website dedicated to recording the persecution of Falun Gong in China.

The deprivation of any forms of pension is illegal, Lai Jianping, a political expert from China University of Political Science and Law, said on March 28.

“The deprivation of money bankrupts people, leaving them with nothing to rely on, and even food- or other necessities- insecure. They are driving people to a dead-end,” the former Chinese trial lawyer Chen Jiangang warned in an interview on March 29.

The sophisticated mechanism of internet censorship and surveillance makes the total number of cases concerned about human rights abuse against Falun Gong practitioners in communist China hard to record and confirm. Under the tight-fist control of the Chinese Communist Party (CCP), anyone investigating the details of the persecution can become a victim themselves.

Falun Gong was violently targeted by the CCP on July 20, 1999, out of fear that its estimated 70 million to 100 million adherents exceeded party members.

First introduced to the public in 1992, the practice, also known as Falun Dafa, consists of meditative exercises and a set of moral teachings based on the principles of truthfulness, compassion, and tolerance, which are rooted in traditional Chinese culture.

The brutal campaign to eradicate Falun Gong caused millions of practitioners to lose their jobs, be expelled from schools, jailed, tortured, and even killed for organ harvesting, simply for their belief.

In 2020, pension suspension cases emerged throughout China, from northeastern Liaoning Provinces to southwestern Sichuan Province. And there is no sign of it stopping in 2021. Data recorded on Minghui.org shows another 27 practitioners have had their pensions suspended from December 2020 to January 2021 for upholding their beliefs.

In southwestern Sichuan Province, a retired middle school teacher from the provincial capital of Chengdu had her pension suspended since December 2019. Zhan Min told a reporter on Oct. 14, 2020, that she was not informed of the suspension until she went to the bank in October 2020.

Zhan was told that the pension was used to pay for money she received between March 2012 and March 2015.

“According to a new policy, Falun Gong practitioners wouldn’t be entitled to any salary or pension while serving time for their faith,” a report quoted the words of the Human Resources and Social Security Bureau in Chengdu. In March 2012, Zhan was sentenced to three years of imprisonment because she distributed leaflets about Falun Gong, which is banned and censored in China.

There was no exception in the central city of Wuhan in Hubei Province. The news on March 17, 2021, revealed Liu Caifang had her monthly pension deducted from 3,271 yuan ($500) to 996 yuan ($150) in December 2020 and January 2021. The officials who answered her inquiries said the money she received during her three months of detention in 2008 should be paid back. The official also demanded she sign an agreement. Otherwise, the deduction would become permanent.

In northeastern Jilin Province, Zhu Xiyu of Yanbian city was ordered to pay back the 200,000 yuan ($30,461) pension she was given during her eight-year imprisonment. The authorities claimed that she was not entitled to be paid during her time of imprisonment for her faith. Zhu told a reporter on Jan. 5 that local officers demanded her son and sister pay for her. She had filed an appeal.

The news on March 21 said she is currently missing.

On Jan. 8, 2021, a report shows that 76-year-old Wei Xiuying from Linhai city of northeastern Liaoning Province won a lawsuit against the local Social Security Office, which has withheld her pension since December 2016.

However, the office refused to resume her pension and demanded Wei pay back the 104,635 yuan ($16,000) she received during her time imprisoned.

Who Gave the Order?

The continued trend of suspending Falun Gong practitioners’ pensions or demanding they pay back the money received while imprisoned, seems not to be ordered by the Chinese regime’s Social Security Office.

Such policies concerning Falun Gong practitioners generally come from the local public security, national security, or even higher offices of the CCP, said Lai Jianping, a political expert from China University of Political Science and Law.

“It is not a decision made by any individual or institution because it is politically systematic.”

He suggested that the 610 Office is probably involved in this process.

The 610 office was established by then-party leader Jiang Zemin and named after the date of its creation, June 10, 1999. It functions outside the state system without any official standing. The core task of the 610 office is to suppress the Falun Gong spiritual group through “defaming their reputations, bankrupting them financially and destroying them physically,” according to a secret order from Jiang.

Early reports on Minghui had revealed such an approach to the persecution. At the beginning of the persecution in 2000, Zhao Zhufang was stripped of her pension after she appealed in Beijing. In 2005, Jiang Ruishan from Beijing had had his retirement pension suspended by the Bank of China after he served two and a half years in prison for his belief.

Lai warned that such cases are entirely illegal.

“Based on China’s laws, such as its Constitution, the Labor Law, or the Social Insurance Law, it stipulates citizens have the right to get pensions.

“The absolute right should not be deprived for any reason, and is backed by the human rights conventions, including the United Nations.”

Chen Jiangang, a former trial Chinese lawyer and visiting fellow at the American University Washington College of Law, pointed out that pensions are the savings from employees’ wages. “When they strip you of pension, they are taking your money. It is robbery.”

“The CCP can deprive people of life, freedom, and property,” he explained, as the nature of CCP is evil and “worse than that of bandits.”

Lai added, “not only Falun Gong practitioners, but other descendants like the former party insider Cai Xia also had pensions withheld.” He said the phenomenon reflects the tyrannical nature of the regime.