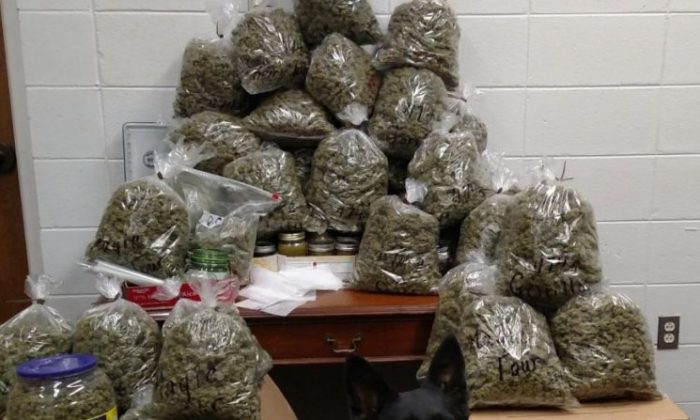 Sixty pounds of marijuana and cans of concentrated THC seized from an elderly couple in Nebraska. (York County Sheriff's Department)
US News

An elderly man and woman who were busted in Nebraska with a trunk full of marijuana “Christmas presents” have been identified as the parents of a top Vermont prosecutor, the Burlington Free Press reported.

Patrick Jiron, 83, and his wife, Barbara, 70, of Clearlake Oaks, California, were arrested on Dec. 19 with 60 pounds of assorted marijuana goods with a street value of over $300,000 police say. The pair told police that they were driving cross-country to deliver the pot as gifts for relatives and friends in Vermont and Boston.

Justin Jiron’s boss told the paper that there is no connection between the Nebraska bust and her employee.

“Justin is in no way connected to this allegation other than by relation,” Chittenden County State’s Attorney Sarah George, wrote in an email to the Burlington Free Press. “Justin is and has been a dedicated public servant for over 15 years, and I assure you he is as surprised and upset about these allegations as anyone.”

As a prosecutor, Jiron worked on a number of high-profile cases in Vermont. He prosecuted the man who abducted and raped a college senior and another man who killed two people in a shooting spree in Essex.

“Justin, of course, loves his parents and is concerned about their welfare,” George added. “However, he is extremely disappointed in their behavior and actions as reported by media outlets.”

The prosecutor’s parents were charged with possession of marijuana with intent to deliver and no drug tax stamp.

“I don’t think he knew anything about what his parents were bringing over or what they intended to do with it,” John Campbell, the executive director of Vermont state’s attorney offices, told the Burlington Free Press. “From what I understand, this is as much as a shock to him and a surprise that it is to anyone else who has heard about it.”

The couple was pulled over after they crossed a center line on a road without signaling. The deputies who approached the couple’s Toyota Tacoma smelled a pungent marijuana odor, NPR reported.

Patrick Jiron was placed in York County Jail, while Barbara’s processing was delayed due to a medical issue, Fox News reported.