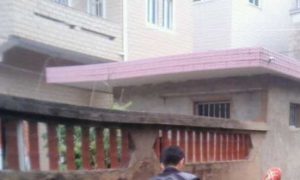 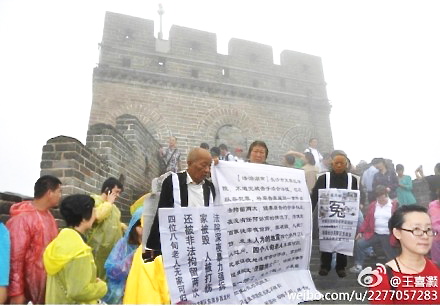 Four 80-year-old people from Changsha, Hunan Province, appealed for justice at the Great Wall in Beijing on June 8. (Weibo.com)
News

On June 8, four 80-year-olds from the city of Changsha in Hunan Province attracted some attention from mainland and overseas tourists on the Great Wall in Beijing. Wearing sign boards which featured the jumbo-sized, eye-catching Chinese character “Yuan” or “injustice,” they effectively detailed their grievances.

According to Wang Xihao, who posted the story and photos on Weibo.com, these elderly people are landless farmers from the village of Dongan, Furong District, Changsha City. On November 5, 2011, their houses had been destroyed due to forced demolition by the local government, and they had also been beaten and detained. Since that time, they had taken the difficult, time-consuming, and often fruitless, path of petitioning.

Wang Xihao, who also lives in Dongan and also suffered home demolition, told The Epoch Times, “On June 8, Zhou Guoxing, Zhou Keqin, Hu Meiying and Yi Ganzhi, went to the Great Wall in Beijing, because our houses were demolished by violent force late at night and all petitions at the local level had been in vain. These men have now been taken back to our home village, but I will stay at Beijing to continue to petition.”

Their stories have aroused a lot of public sympathy.

In a blog post from the Chinese online forum Kaidi Community, “These 80-year-old people should have been enjoying their twilight years peacefully. But now they have no family and their homes have been destroyed.”

A netizen called “Nantong Demolition Is Really Dark” wrote on Weibo.com, “Changsha is really the city of bloody demolition, which even made an 80-year-old homeless. You [local authorities] are doomed to be disgracefully crucified upon the pillar of history.”

The four farmers, Zhou Guoxing, Zhou Keqin, Hu Meiying, and Yi Ganzhi, were also becoming increasingly unable to work due to their old age and illness, and all of them had also undergone surgical procedures, according to a Boxun News report on April 29, 2012.

Their joint statement was posted on the Chinese website Boxun News on July 11, 2011, “All of (our) savings had been used to build our homes, and between the rent on the houses and the land income, we could barely make ends meet. Now, the demolition of our homes by the local government has completely stopped us from earning a living.”

Translated by Euly Luo and written in English by Barbara Gay.
Read the original Chinese article.