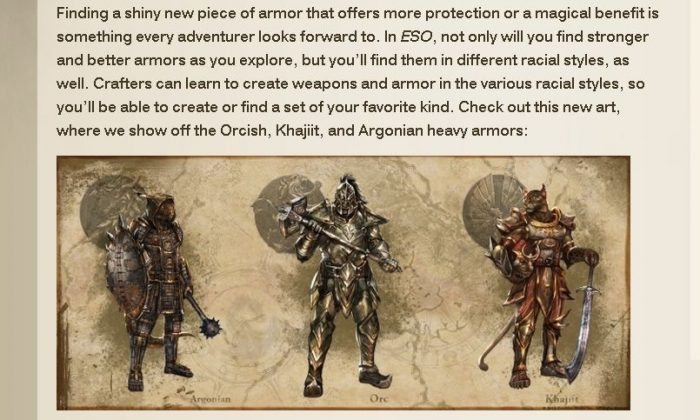 A screenshot of the Elder Scrolls Online website shows the new armor.
Tech

A new video from Elder Scrolls Online developers shows the class and character progression that will be implemented in the upcoming MMORPG, which has a release date of sometime in 2014. The beta is still being tested.

“Elder Scrolls games have always had very open-ended progression systems and this one is no different,” lead gameplay designer Nick Konkle says in the video.

He added: “There’s a huge number of choices and you can focus on one or spread yourself amongst all of them. And, of course, if you spend enough time, you can eventually master them all.”

Bethesda in a blog posting also said the company is looking at ways to tackle the balance between a single-player RPG experience and the experience of playing an MMORPG.

“In multiplayer games, though, it can be important to stand out from the crowd. How would we preserve a distinct Elder Scrolls feel but give still everyone the opportunity to develop an identity?” it reads.

“You’d probably recognize some of the early systems we tried, but more traditional systems just weren’t meeting the goals we had in mind. We needed to provide the broad range of options that Elder Scrolls fans expect. Over time, we started to recognize ways we could tie everything together and satisfy both of these objectives.”

It said that there are still classes that a player has to choose at the start of the game, but there are more open-ended options available.

“It helps us encourage diversity while still providing choices, and it allowed us to emphasize multiplayer strategy—members of the different classes have access to their own skill lines, which creates opportunities for you to work with your allies, coordinating your unique skills and adding depth and variety to team gameplay,” the blog said.