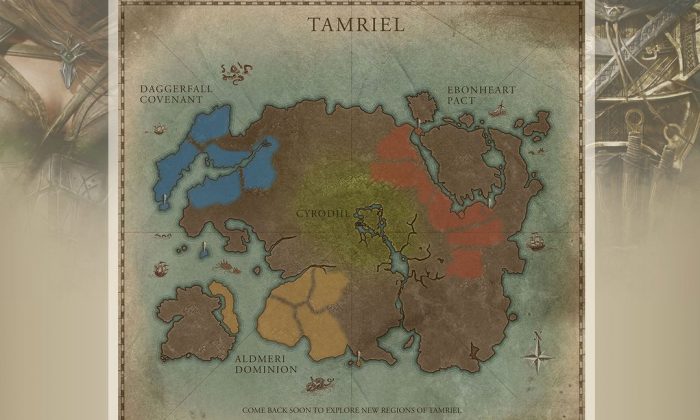 A screenshot of http://elderscrollsonline.com shows the map of Tamriel.
Tech

Elder Scrolls Online Release Date is April for PC and June for PS4, Xbox One

The Elder Scrolls Online developers announced that the game will be coming out April 4, 2014, for the PC and Mac.

The MMORPG from Bethesda will arrive on the Xbox One and Playstation 4 sometime later in 2014–on an unspecified day in June.

Bethesda also released a trailer for the upcoming game, which shows the battles between three different factions and PvP battles.

According to a Bethesda blog posting, “Game development is coming along very well. We completed major systems development, and are focusing on making this the Elder Scrolls game you expect: polishing the hundreds and hundreds of hours of content, making combat even more fun and responsive, fixing quest issues, and much, much more. In fact, we plan on spending the next few months before launch reacting to the latest feedback from internal and external testers and gameplay data we have collected.”

In November, the company sent out closed-beta keys to a number of people.

“As some of you know, we’ve been in beta testing for about a year now, leading up to our most recent test in late November where we had over 300,000 people in the game over a 48 hour period. We’ve had approximately 4 million people sign up for beta and that number continues to grow,” the company said.

The game developers also released art for armor and gave an update on class and character progression.

“Worldwide demand for The Elder Scrolls Online is extraordinarily high. This means we need to do a staggered rollout of the different versions of the game to spread out the initial service load and ensure an enjoyable, smooth gameplay experience. It is not only a game we are launching – it is a large online service as well, and our number one priority is to ensure a trouble-free, stable rollout for everyone,” the posting reads.