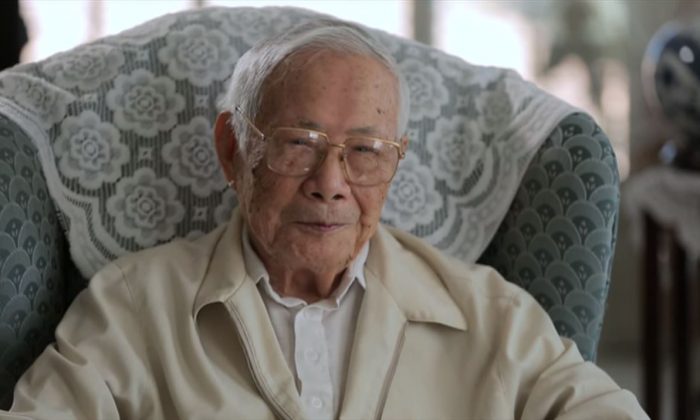 Xu Jiatun, a 100-year-old, former elite Chinese Communist Party official turned defector, chooses his words carefully. In the two decades he has lived in exile—he defected after the June 4 massacre in 1989—he has only given a handful of interviews to Hong Kong media, and says little that’s worthy of a good headline.

After an emergency spell in a Los Angeles hospital, however, he appears to have thought it time to confide his musings and hopes for current Party politics in a well-known Hong Kong journalist.

Simon Kei Shek Ming, the 2009 winner of the prestigious Society of Publishers in Asia’s Journalist of the Year award, has had about a dozen informal interview sessions with Xu over the past eight years. Kei, formerly with the reputable Chinese language magazine Yazhou Zhoukan, connected with Xu in Los Angeles, and got the centenarian to share his thoughts on Party leader Xi Jinping’s anti-corruption campaign.

Now, steps are being taken to go after bigger tigers.
— Xu Jiatun

From the late 1970s to the 1980s, Xu held prominent positions in the Chinese regime: he was a member of the Communist Party’s elite Central Committee, governor of Jiangsu Province, and was the head of Party mouthpiece Xinhua in Hong Kong, the Party’s de facto presence in the then-British colony. He went into exile in the United States in 1990 because he opposed the Tiananmen Square massacre, and was expelled from the Party in 1991, after Jiang Zemin, leader at the time, got wind of the defection.

Somehow, Xu appears to remain a staunch believer in the Party, though has no kind words for the Party officials that effectively ruled from the time of his exile until recently. Xu resides in Chino Hill, Los Angeles.

“China, in 30 years of reform and opening, has unexpectedly achieved a level of development that the West only attained after 300 years of industrialization,” Xu told Simon Kei. The interview was published in The Initium, a new Hong Kong-based news website.

“However, Jiang Zemin and Li Peng placed their interests above all else during their reign,” Xu added. Jiang the former Party chief, and Li the ex-Chinese premier had “formed cliques, engaged in corrupt activities with their children, and bred streaks of tigers and swarms of flies everywhere in China.”

Xi Jinping coined the term “tigers and flies” at the start of his anti-corruption campaign in 2013 to reference venal and crooked elite and low-ranking officials.

There is basis for Xu’s critique of Jiang and Li, the inheritors and propagators of Party paramount Deng Xiaoping’s bureaucratic capitalism, or the use of political power for private, monetary gain.

Jiang had built up a sprawling political network during his time in office, and continued to influence Chinese politics for over a decade after relinquishing the position of Party leader. (He only gave up the military chair three years later.) Elder son Jiang Mianheng leveraged his father’s prestige to build up a telecommunications empire, while younger son Jiang Miankeng had a stranglehold on the transportation and public works industry in Shanghai.

Li Xiaolin, the daughter of former premier Li Peng, was for many years a state electricity mogul, and until last year, was the CEO of the Hong Kong-based China Power International, a subsidiary of one of China’s five biggest electricity companies. In 2015, the International Consortium of Investigative Journalists revealed that Li and her husband had a Swiss bank account with about $2.5 million, and the Panama Papers showed that Li owned an offshore company in the British Virgin Islands; offshore companies are often used as tax havens by the wealthy.

Conversely, Xu Jiatun holds Hu Jintao, Jiang’s immediate successor, and Hu’s premier Wen Jiabao in good esteem. In a 2008 interview with journalist Kei, Xu said that Hu and Wen, had, “in the face of disaster, showed ‘people-oriented’ governance by respecting the rights and values of the people, and embraced the philosophy of ‘serving the people.'”

“Not just me, but fair-minded people everywhere rated them highly,” he added.

He has similar regard for Xi Jinping.

“After the 18th National Congress, the Party leadership of Xi Jinping has not only cleaned up the ranks and restored China’s traditional national virtues, but also arrested tigers and flies,” Xu said. “Tigers have been arrested regardless of position or power, such as Bo Xilai and Zhou Yongkang, and Xu Caihou and Gu Junshan in the military; they have been purged, expelled from the Party, and dealt with in accordance with the law.”

Jiang had intended for former Chongqing chief Bo Xilai to take over Zhou Yongkang as security czar—and perpetuate Jiang’s control—at an important political conclave in 2012. The plan, however, was derailed when former Chongqing police chief Wang Lijun outed a Bo and Zhou plot to eventually displace Xi Jinping as Party leader to the Americans when he tried to defect at a U.S. consulate in Chengdu.

When it came to the takedown of Jiang’s army designees, anti-corruption investigators had to bring in several trucks to haul away the ill-gotten loot accumulated by the late Xu Caihou, the former second-in-command of the Party’s military governing body, and Gu Junshan the former military logistics general.

Xu says it’s far from over.

“Now, steps are being taken to go after bigger tigers,” he told journalist Simon Kei.

Given how extensive the anti-corruption campaign has already been, there are only so many “bigger tigers” available to be removed. Perhaps the only men that fit this description are Jiang Zemin and his key henchman, former Chinese vice president Zeng Qinghong.

Last year, state mouthpiece People’s Daily published an editorial calling for Party elders to stop interfering in current political affairs, and the anti-corruption agency criticized a long-dead Manchu noble. Both were interpreted by observers as public warnings against Jiang and Zeng. A large stone stelae bearing the calligraphy of Jiang Zemin was also unceremoniously removed from the entrance to the Central Party School, the regime’s ideological training ground, in Beijing. (As the public engaged in heady speculation that it was a blow against Jiang, School officials said that it had been moved inside the campus—though whether this indeed took place was unclear.)

The menacing winks continued this year. In speeches published in a book and in state media, Xi Jinping identified Bo Xilai, Zhou Yongkang, general Xu Caihou, and two other Jiang patrons, as being guilty of having “carried out political conspiracies to wreck and split the Party,” and charged some Party elders with playing “taishang huang,” or power behind the throne.

Chinese media have this year been awash with reports of investigations by the Party’s internal disciplinary inspectors of departments and companies linked with Jiang’s sons in Shanghai. Anti-corruption inspectors also recently investigated over two dozen government agencies in the city, long the stronghold of Jiang’s group.