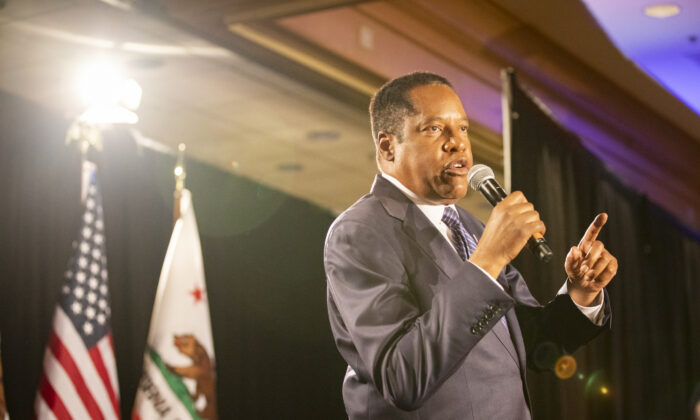 Larry Elder has again scrambled the Republican race for governor. He did so last year during his late, brief run in the recall against Gov. Gavin Newsom. And he did so this week by announcing he wouldn’t run again.

Elder was probably the best shot for Republicans to defeat Newsom. But it’s still a long way to November.

The main difference between the recall and today is the deteriorating status of President Joe Biden and his Democratic Party. Between the Sept. 14 recall and today came the Nov. 2 Virginia gubernatorial election, won by Republican Glenn Youngkin against a Newsom-type liberal Democrat, Terry McAuliffe.

Inflation, unemployment, lockdowns, vaccine mandates, Critical Race Theory pushed on schoolchildren, the incumbents’ inability to deal with the massive new COVID-19 outbreak and other issues continue to plague Democrats at all levels.

Moreover, while in September Newsom tied Elder to former President Trump, that tactic is unlikely to work against whatever Republican goes against him in 10 months. By then, Biden will have been in office almost two years, and whatever problems ail the nation by then will be blamed on him and the Democratic Congress.

Virginia was also the first place we started to see actual voting proof—as opposed to polls—showing Latinos starting to move toward the Republican Party.

Yet this still is California. Newsom will be spreading around a state surplus estimated by the Legislative Analyst at $31 billion. Although unemployment here remains the highest among the states at 6.9 percent in November, I still see “Help Wanted” signs all over Orange County.

So long as the economy continues strong, it’s going to be hard to defeat the incumbent governor.

Elder did well because he had high name recognition from his decades-long radio show in Southern California. He said after the loss, he might have won with the extended length of a traditional campaign, with time to refute Newsom’s attacks.

“I do believe that I am likable and appealing, and if voters had enough chance to see me and recognize I don’t have a tail, I don’t have horns, and I had more time to raise more money, things just might have been different,” Elder said.

Nobody else has the same stature as Elder. But this time there’s a June 7 primary, which will elevate the top Republican.

With Elder out, here are some potential GOP candidates for governor. All are speculative.

John Cox. He lost to Newsom in 2018, 62 percent to 38 percent. He came in fifth in the recall replacement election at 4 percent, third among Republican candidates. A wealthy businessman, he has the money for a long campaign. The problem is, after two losses, he doesn’t exude success. If he runs, I hope he reprises his TV ad of him with a California bear.

John Moorlach. The former state senator from Costa Mesa considered it in 2018, when I was his press secretary, but ultimately decided not to run. Given Cox’s large loss, that was a wise decision. In 2022, Moorlach has also been talked about to run for controller, especially after his criticisms of the incompetence of the incumbent, Betty Yee, for extreme tardiness in producing the state’s Comprehensive Annual Financial Report. She is term-limited and so won’t be running again.

Kevin Faulconer. The former San Diego mayor finished third in the replacement election with 8 percent, second among Republicans. He positioned himself as a “moderate.” The problem with that is, with the Democrats moving left on so many issues, Republicans even in California want somebody with more gumption to stand up to the nuttiness. They seem to want Trumpism without Trump.

Kevin Kiley. The Assemblyman from Rocklin came in just behind Cox, with 3.5 percent of the replacement vote. He’ll be 37 on Jan. 30. He backs school choice and opposes vaccine mandates. But he’s moderate in other ways, such as supporting John Kasich for president in 2016. A year ago, he published a book, “Recall Gavin Newsom: The Case Against America’s Most Corrupt Governor.” Pushing that might get him some publicity.

Travis Allen. The former state assemblyman ran in 2018, finishing fourth with 9.5 percent in the Top Two primary. That was second for Republicans, behind Cox.

Doug Ose. The former congressman ran in the recall election but pulled out after suffering a heart attack. In Congress, Americans for Tax Reform called him a “Hero of the Taxpayers.”

Peter Thiel. The billionaire entrepreneur made some publicity when he quit Silicon Valley for Southern California. Unlike Elon Musk, he hasn’t left for Texas—yet. He has donated to a diverse group of Republicans including Trump and Meg Whitman, the 2010 GOP gubernatorial candidate who backed Joe Biden last year and is now U.S. ambassador to Kenya.

Ashley Swearengin. The former Fresno mayor ran well for controller in 2014, losing to Yee, 54 percent to 46 percent. Swearengin would probably have produced those CAFRs on time.

Rosey Grier. My favorite. The former NFL great now is a Protestant minister. He briefly ran in the 2018 race for governor before dropping out. In these times of the elderly Joe Biden, age would be a positive factor for Rosey, who on July 14 will be 90.