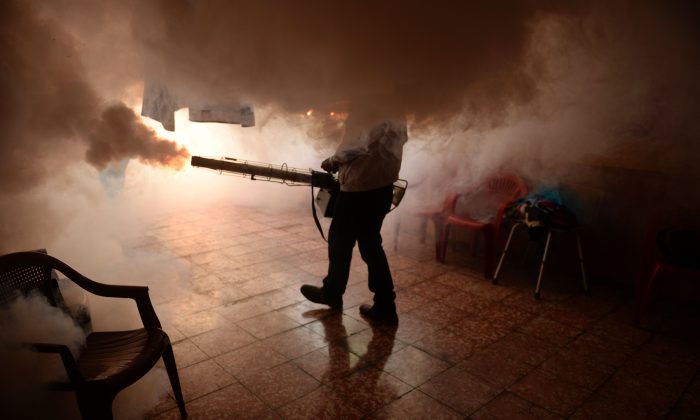 A Health Ministry employee fumigates a home against the Aedes aegypti mosquito to prevent the spread of the Zika virus in Soyapango, six km east of San Salvador, on January 21, 2016. (MARVIN RECINOS/AFP/Getty Images)
Americas

Transmitted by mosquito, the Zika virus can cause birth defects in pregnant women who are infected, such as microcephaly, where the infant is born with an abnormally small head and suffers from a undeveloped brain.

The disease was first isolated by scientists in 1947 in Africa, but appeared in Latin America in 2015. According to the World Health Organization, the virus is now spreading in 21 countries, all in South and Central America, including Mexico, Chile, and Puerto Rico.

The Center for Disease Control issued a travel advisory for pregnant American women traveling to those countries, posting advice on how to avoid mosquito bites. A number of governments have advised women to avoid getting pregnant for a few weeks or months as the virus spreads, but El Salvador went the farthest, recommending that women avoid pregnancy until 2018, the Reuters reports.

“We’d like to suggest to all the women of fertile age that they take steps to plan their pregnancies, and avoid getting pregnant between this year and next,” said Deputy Health Minister Eduardo Espinoza.

The El Salvadoran government issued the advisory after nearly 6,000 people in the country contracted the Zika virus since it started spreading in the country in mid-2015.

Symptoms of the Zika virus include mild fever and a skin rash. Getting a bite from an Aedes mosquito is the only confirmed path of transmission.

In Brazil, the number of infants born with microcephaly increased by a factor of 20 compared to past years, rising from around 150-plus annually to over 3,500 in 2015, when the Zika virus began to spread.