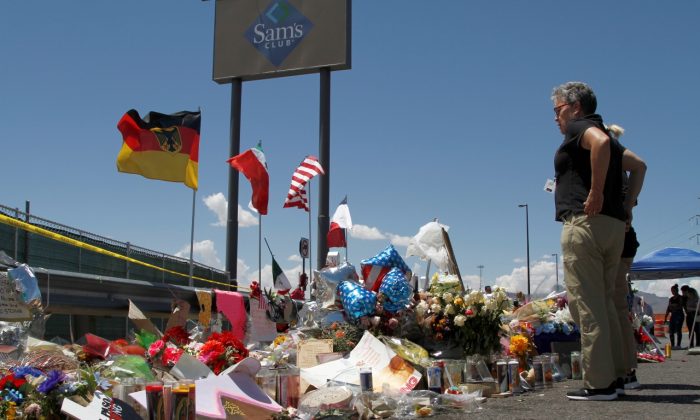 Mourners visit the makeshift memorial near the Walmart where 22 people were killed in a mass shooting in El Paso, Texas, on Aug. 12, 2019. The flags show the nationalities of those killed in the attack, including a German man who lived in nearby Ciudad Juarez, Mexico. (Cedar Attanasio/AP Photo)
US News

EL PASO, Texas—The suspected gunman in the deadly mass shooting at an El Paso Walmart earlier this month told police that the AK-style rifle he used in the attack came from Romania, according to an investigative report.

The Texas Tribune reported on Aug. 28 that Patrick Crusius, 21, told police he ordered the weapon online before picking it up at a gun store near his suburban Dallas home. The Tribune cited a Texas Department of Public Safety document that also says the suspect told police he purchased thousands of rounds of ammunition from Russia.

Crusius told them the Romanian rifle was delivered to Gun Masters, a gun store in Allen, Texas, according to the report. There is no gun store by that name in Allen, but there is a store called Gunmaster in nearby Plano.

An employee of the store told The Associated Press the owner was not available and questions would need to be sent by email.

Gunmaster did not respond to written questions Wednesday. The shop’s gunsmith, Brian Park, told the Tribune Tuesday that he did not know whether Crusius received a gun there.

El Paso police said shortly after the shooting that killed 22 people that the rifle was purchased legally.

“Just like any other retail, brick-and-mortar is taking a back seat to the internet,” said David Prince, the owner of Dallas-area Eagle Gun Range.

To legally purchase a weapon online, the buyer must have it shipped to a licensed gun dealer who records the firearm’s make, mark and serial number before performing a background check. If the person passes, they can have the gun.

This allows law enforcement to identify the original buyer of a gun if it’s used in a crime or is stolen.

When done right, the process is “one of the most effective tools in a criminal investigation,” said Richard Marianos, a former assistant director at the Bureau of Alcohol, Tobacco, Firearms and Explosives.

Police have not named the specific model of the rifle used in the attack. According to a warrant, Crusius told investigators it was an AK-47 assault rifle. Police have provided specific information on the ammunition, which can be used in an AK-47-style rifle.

An El Paso police spokesman declined comment Wednesday on the purchase of ammunition and the Department of Public Safety report.

Investigators have said they believe Crusius published a racist screed online shortly before the attack in which the weapon is described as an AK-47 WASR-10, the “civilian version of the (AK-47).”

The Department of Public Safety report says Crusius told investigators he entered the Walmart on Aug. 3 then went back to his car to finish writing and publishing the screed. He then returned to the store and opened fire.

Crusius left Walmart in a Honda Civic and surrendered to an officer on a motorcycle about a quarter of a mile from the store, authorities have said. In the Department of Public Safety report, Crusius said he called 911 from his car but couldn’t get through to a dispatcher. He was returning to the store to surrender when he encountered Texas Rangers, according to the Public Safety report.

Authorities are investigating the attack as domestic terrorism. Crusius told police that he targeted Mexicans, according to a warrant. Most of those slain had Hispanic surnames, and eight were Mexican citizens.

Today we had hearings responding to the tragic shooting in El Paso.

Crusius is charged with murder and is being held without bond. He has been separated from other prisoners, according to the El Paso sheriff’s office. He’s been put on suicide watch at least twice since he was arrested.