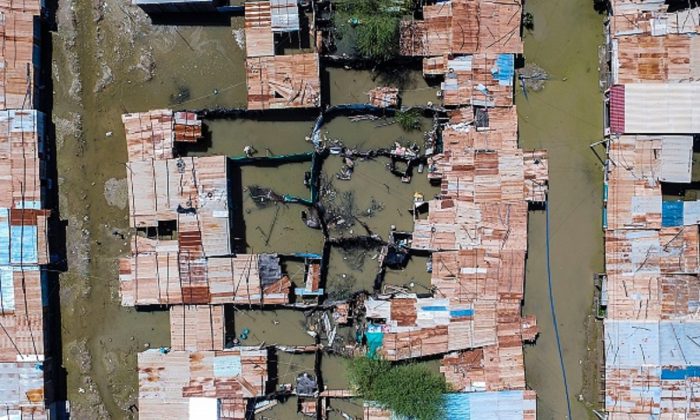 An aerial view of flooded houses at the "El Indio" settlement on the outskirts of Piura, in northern Peru, on March 23, 2017. (Leo Ramirez/AFP/Getty Images)
US News

El Niño Is Back but It’s Late, Weak and Probably No Big Deal

WASHINGTON—An El Niño, which can alter weather worldwide, has formed but it’s so weak and late that it shouldn’t be a big deal, U.S. forecasters said.

The National Oceanic and Atmospheric Administration announced on Feb. 14, that the climate feature formed in the central Pacific, but forecasters don’t expect it to last more than three or four months.

An El Niño is a natural warming of the ocean that once it interacts with the atmosphere often warms up the globe and changes rainfall and temperature patterns, making some places wetter and some places drier.

An El Nino, which can alter weather worldwide, has formed but it’s so weak and late that it shouldn’t be a big deal, U.S. forecasters said. https://t.co/GV8fQCqVtN

When there is an El Niño, there are generally fewer and weaker hurricanes in the Atlantic, but this one might not make it to summer and have any effect on the next storm season, said Mike Halpert, deputy director for the NOAA’s Climate Prediction Center.

A wintertime El Niño often means more rain for the U.S. South and Southern California, but this is late in the season and it’s already rainy there, Halpert said.

The current El Niño is quite different than the last one in 2016, which was one of the strongest meteorologists have seen and helped push Earth to its warmest year on record.

This year’s version is “kind of limping along,” Halpert said. So he and other scientists said they don’t expect many significant effects.

Forecasters had been waiting for it since last June when NOAA issued its first El Niño watch. But while the water was warmer than normal in the Pacific, it wasn’t causing the changes in the air that would satisfy the definition for El Niño.

During stronger past El Niños, the U.S. economy has benefited because of less drought and fewer hurricanes, economic studies show.

In March 2017, heavy rains caused flooding and mudslides across northern Peru, according to Peru’s National Meteorological and Hydrological Service (SENAMHI).

Peruvian meteorologist Raquel Loayza said the rain was caused by an unusual; localized version of El Niño, which warmed in the waters off Peru’s Pacific coast.

The rains, the heaviest in two decades, were responsible for 75 deaths and 263 injuries, with 20 people missing.

Usually, a coastal El Niño results from a more general El Niño in the Equatorial Central Pacific, which can trigger droughts and flooding all around the world.

About half of the nation has been placed under a state of emergency, as government officials try to evacuate residents.