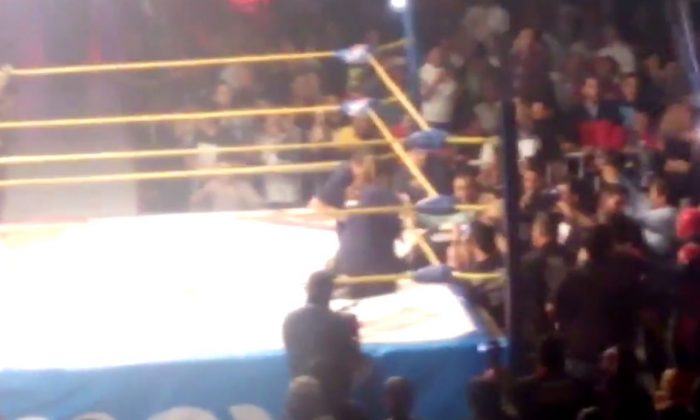 He died after the match was over, apparently due to injuries sustained while wrestling.

A popular Mexican wrestling star was killed during a live show in Tijuana last night when a fighting stunt went terribly wrong in the center of the ring.

El Hijo Del Perro Aguayo was taking on former WWE star Rey Mysterio Jr. when he was performing a stunt and apparently snapped his neck or spine.

The wrestlers didn’t seem to realize the extent of the injury at first — but soon realized something was wrong. Once everyone realized how serious it was — Aguayo was put on a stretcher and rushed to a hospital where he was pronounced dead.

Perro was fighting Rey Mysterio Jr. and Xtreme Tiger in Tijuana on March 20 when something went terribly wrong. The wrestler went limp on the ring ropes after Rey issued a dropkick, according to The Wrestling Observer.

The match continued for quite some time before everyone realized that Perro was not OK. He was treated in the ring by medical personnel before being transported to the hospital. The cause of Perro’s death has not been officially revealed, but sources told The Wrestling Observer that Perro died from cervical spine trauma after snapping his neck on the ropes.

Here’s a video of the match where he apparently died: