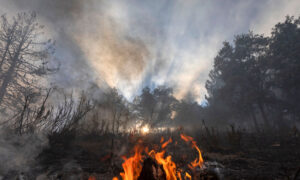 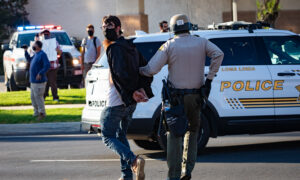 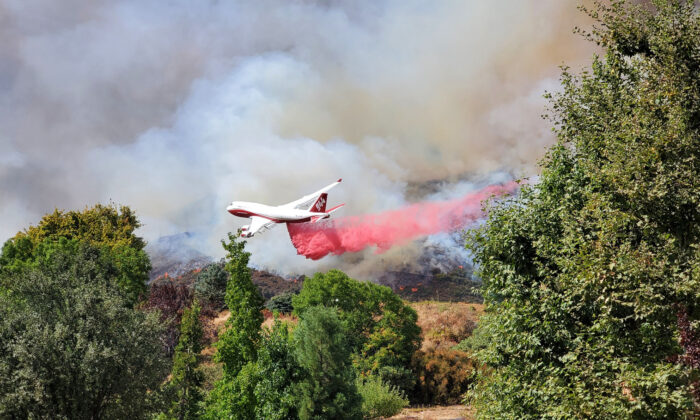 An airplane drops dampening material on a wildfire in San Bernardino County, Calif., on Sept. 5, 2020. (Courtesy of a local photographer on the scene)
Southern California

The raging wildfire ignited by a pyrotechnic device at a gender reveal party in San Bernardino, California, has cost one nearby resident his home and his dog.

Steve Gardner, 59, told The Epoch Times that he lost his home, belongings, truck, and one of his dogs to the inferno when he evacuated the property to save his life.

The California Department of Forestry and Fire Protection (Cal Fire) reported Sept. 10 that the El Dorado Fire was still blazing. It had burned 12,613 acres so far, and was 23 percent contained.

Gardner was renting half a duplex on Mile High Ranch Road in Oak Glen when the fire struck unexpectedly.

He said he was awakened just before dawn on Labor Day by his startled elderly neighbor, Lenie Humphrey. When he looked out the window, he could see the flames were close.

“I had to run for my life,” Gardner said. “If I had stayed there much longer, I might have died.”

In the rush, he was forced to leave one of his dogs behind. The dog, a Chihuahua, didn’t survive the blaze.

Two days later, on Sept. 9, Gardner searched through the rubble of the home for remnants of his life. While a helicopter flew overhead, he scoured the ashes for his wedding ring.

Nearby, his Ford Ranger truck had melted.

“Oak Glen is one of the best kept secrets in Southern California, and up until these fires, it was a beautiful place. But now practically every single mountain I’m looking at is burned out,” Gardner said.

Gardner had rented the home three months ago to raise chickens and grow a garden. He was preparing for uncertain times that may lay ahead, he said.

He lost more than 15 egg-laying hens and five roosters to the fire. The seven remaining hens “went to a good home.”

Gardner gathered the remains of some clothes, a burnt suitcase, a computer, and several personal items from the rubble. A few minutes later, he left to join his wife and three daughters at the family’s primary residence in West Covina.

Humphrey, the elderly neighbor, escaped only with the clothes on her back and a Bible, he said.

“She lived there for 38 years. She lost everything,” he said.

GoFundMe pages have been set up by caring neighbors to help both Humphrey and Gardner recover.

Jim Riley, owner of nearby Riley’s Farm, said most of his property had fortunately been spared by the fire.

A shed was lost, and part of a Gold Rush attraction was damaged, Riley said. A restaurant and other historical attractions on the property survived.

“The orchard and rooftops stayed intact as kind of a testimony to the value of irrigated farming in California. Apple trees and vineyards are real good barriers for fire protection,” Riley said.

The fire spread from the park at Oak Glen Road and Potato Canyon Road to Yucaipa Ridge, which separates Mountain Home Village and Forest Falls from the city of Yucaipa.

About five weeks earlier, the Apple Fire on the other side of Oak Glen burned nearly 33,500 acres before being 95 percent contained on Aug. 18.